JaTyrone Hollis faced the death penalty and was charged with capital murder after Mesquite police claimed he robbed and then killed a man inside a car in 2017. 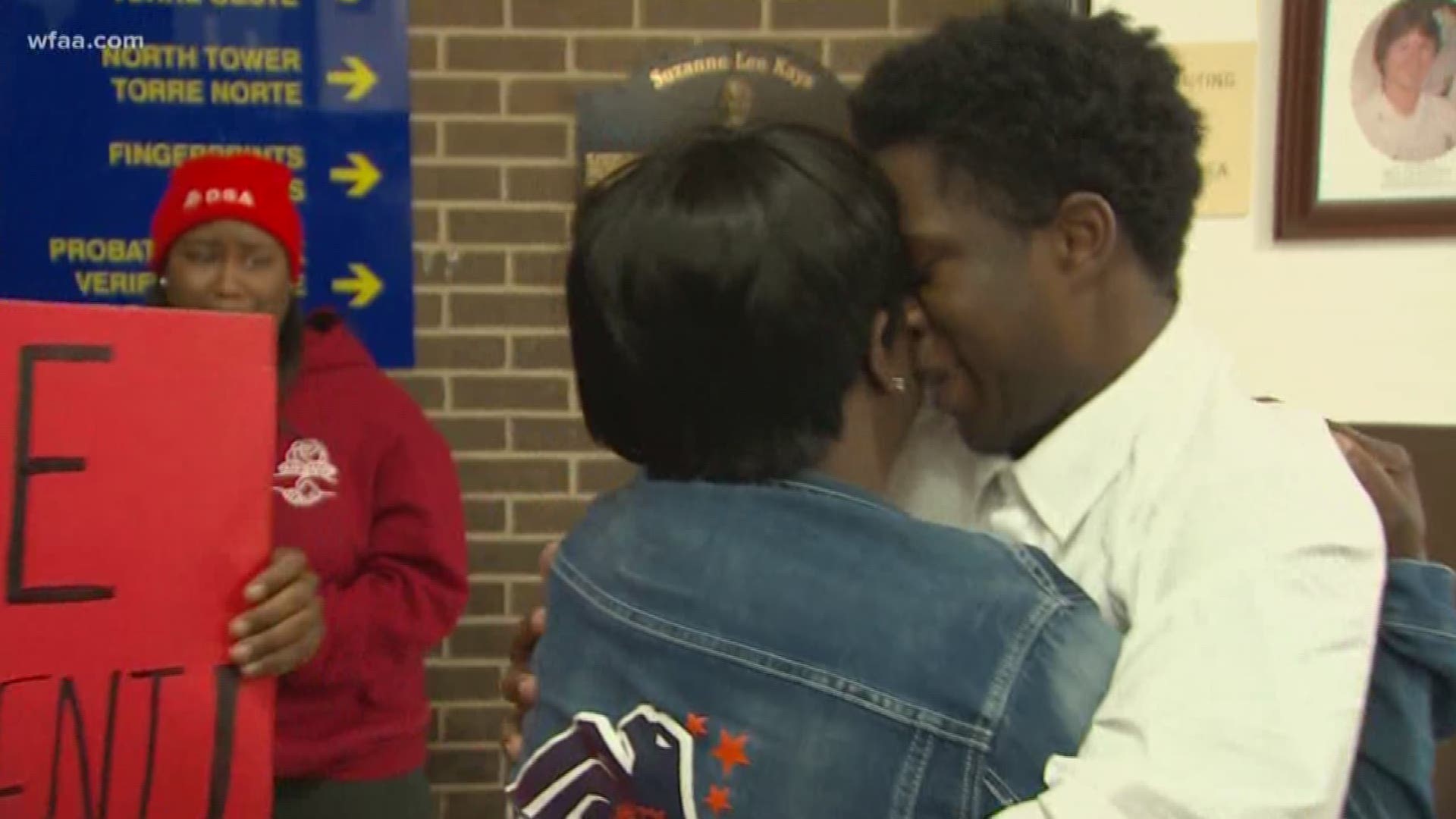 DALLAS — A 20-year-old Mesquite man who was acquitted of capital murder told reporters Monday afternoon that he spent over two years behind bars for a crime he didn't commit.

After that, he was awarded a gift for an anonymous donor if he wanted it: a GED and college education paid for.

JaTyrone Hollis was arrested for the shooting death of Isaiah Deanthony Jones in October of 2017.

He stayed in jail until his trial last Friday.

"It's time I can't get back. My grandmother passed away with me being incarcerated and the experience I went through was just heartbreaking," Hollis said.

Hollis faced the death penalty and was charged with capital murder after Mesquite police claimed he robbed and then killed a man inside a car in 2017.

Attorneys for Hollis admit that the 20-year-old was present for a gun deal that went south, but in no way was the shooter.

Surveillance footage actually shows Hollis not getting into the car Jones was driving, moments before he was shot.

"I have never touched the car,” Hollis said.

But Hollis' lawyers say Mesquite police coerced him into confessing. He was only 17-years-old at the time.

His attorneys released some of the interrogation tapes Monday.

You can hear the following conversation between Hollis and a Mesquite homicide detective:

Detective: “If you want to be honest then tell me the truth about your role in it."

Hollis: "I am telling you. I am being honest."

Police didn't find any fingerprints, DNA or any physical evidence to link Hollis to the crime and his attorneys say the police had two other suspects they didn't pursue.

Kenvione Rayshun Overton was also charged, but his case was eventually dismissed per Hollis' attorneys.

“They got tunnel vision that any other evidence that could have exonerated him on the spot they avoided taking it to heart,” said defense attorney Justin Moore.

Hollis' attorneys said Dallas County prosecutors knew they had a bad case but pursued it anyway. They even offered Hollis a plea agreement which he turned down.

"I knew I had not committed the crime that they accused me of and I put my faith in the Lord,” Hollis said.

"I still can't believe it because of how hard they tried to wrongly accuse me of this crime," Hollis said.

Even after he was found not guilty, the Dallas County Sheriff's Office didn't release him until protesters gathered outside the jail on Saturday morning.

Hollis' lawyers said he was the victim of a biased judicial system.

“It happens more often than we realize. It’s a function of the reality of the system,” said defense attorney George Milner.

His attorneys are now trying to help Hollis get his life back.

They surprised him Monday afternoon.

"There is someone who is anonymous. They don't want you to know who it is but they want to pay for your GED and college,” defense attorney Ashkan Mehryari told Hollis.

Hollis said he is glad to be free and plans to make the best out of his life.

Mesquite police said they are not commenting on the verdict.

"Today, defense attorneys for JaTyrone Hollis, held a press conference in which they asserted their client had been improperly indicted by this office and alleged this administration acted in bad faith. That is untrue. In fact, Mr. Hollis was indicted on October 25, 2018. I did not take office until January 2019. His case was handled by the previous administration.

"Furthermore, two of the three trial attorneys are personal and professional friends of mine and none of them raised any concerns to me about improper prosecution. Of course, we always give the defendant the presumption of innocence and do not expect that someone will be found guilty of any crime, unless and until, we prove the case beyond a reasonable doubt. The jury decided we did not and we will not question their decision.

"Additionally, Saturday morning when I learned from George Milner, one of Mr. Hollis’ attorneys, that he was still in jail, I immediately contacted Sheriff Marian Brown. Sheriff Brown contacted Judge Holmes and Mr. Hollis was released later Saturday afternoon.

"Though our office played no role in Mr. Hollis remaining in jail, we sincerely apologize on behalf of Dallas County that he was not released after he was acquitted."