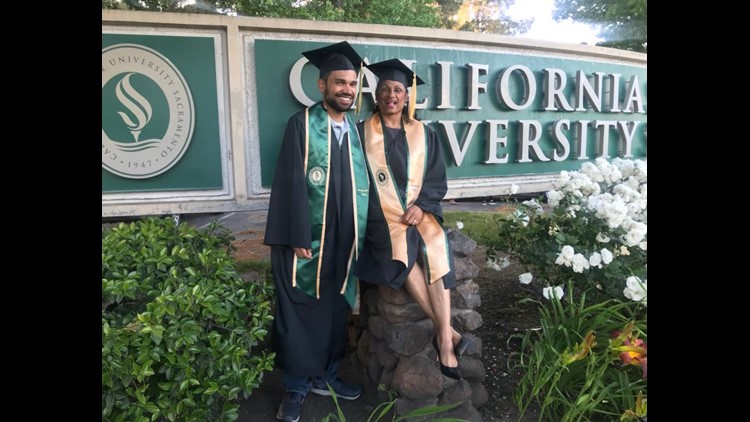 Photo by: Wang, Frances
Jeanine Dinsmore, 61, is graduating from Sacramento State with a degree in child development. The best part? She is also graduating with her youngest son, Joshua.

Sacramento, Calif. — For Jeanine Dinsmore, college graduation is a day she has long been waiting for.

"It's different when you're 27 than when you're 61," said Jeanine. "There's a lot of difference because my way of learning has been different than his."

The 61-year-old mother of 4 is referring to her 27-year-old son Joshua, who is also graduating this year. The two are students together at Sacramento State.

Jeanine hasn't been in school since she graduated high school in 1974! She returned in 2009 to get a degree in child development, while working three jobs.

"Most of the people in my classes, whether it was community college or here, are in their 20-somethings," said Jeanine. "I'm old enough to their mom. Some of them, their grandma!"

But graduating with her youngest son will be the highlight.

"It was not planned!" said Joshua.

Joshua did help his mother with homework and proofreading essays. The English major started at community college, with the intention of transferring to UC Davis to become an entomologist. When he realized he wanted to switch majors, he transferred to Sac State instead.

"Every now and then, we'd run into each other on campus," said Joshua. "I [said hi] but I tried not to make it so obvious that she was my mother!"

"I made a promise I wasn't going to embarrass him," laughed Jeanine. "So if he wanted to talk to me, he could say hi."

Even though it could've been embarrassing going to college with his mother, it's clear Joshua is so proud of his mother, as she is of him.

She is even the reason he somewhat reluctantly agreed to do an interview!

"He said 'Mom I'll do it for you because it's Mother's Day," said Jeanine.

The mother-son duo do have advice for other parents who are thinking of returning to school or students who want to change their majors.

"Anybody who thinks they shouldn't go back to school, don't think that," said Jeanine. "The reward is so awesome."

"Don't worry about the money or prestige," said Joshua. "Do what you want to do."