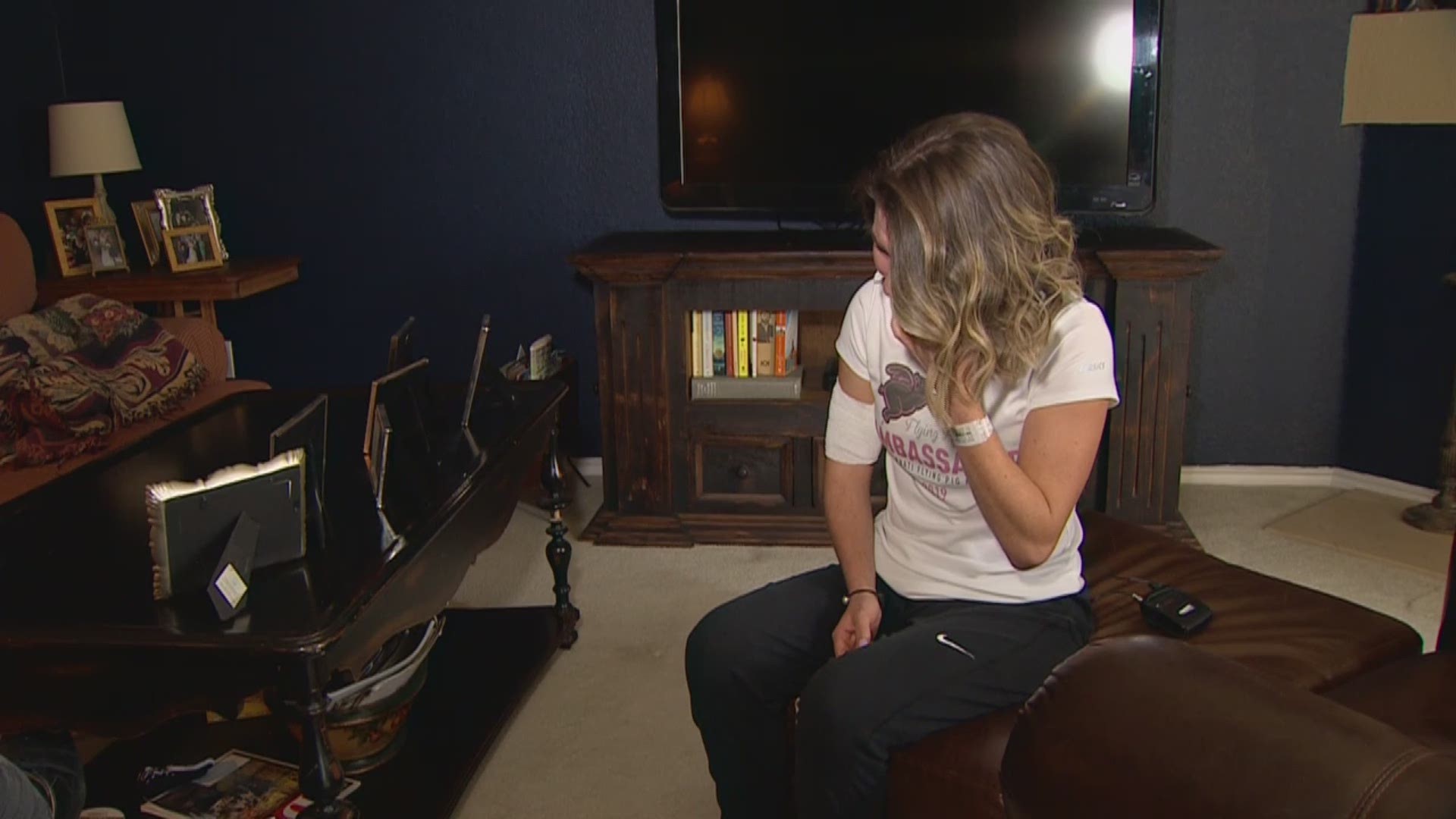 Caitlin Keen, 26, was running alone near the Hulen Street Bridge when the dog began to chase her.

“I was terrified,” she said.

Deep puncture marks show where the dog grabbed her right arm multiple times. Keen’s back, from her buttocks to her right shoulder, is covered with bite and claw marks as well.

Keen said the dog continued to attack as she tried to kick it and fight it off. She said the attack didn’t stop until another runner saw her in distress and started throwing rocks and a man walking two dogs on leash also came to her aid.

Keen said the pit bull terrier mix suddenly became more interested in smelling the other dogs. The man was able to hold the dog’s collar until police and paramedics arrived.

“It sucks. I just don’t want to be scared,” she said from her Fort Worth home, bandaged and in pain after a trip to the hospital where doctors say the wounds can’t yet be completely closed due to the additional risk of infection. “It took me a really long time to get here. And I don’t want that to be taken away by something as stupid as this."

Keen isn’t just any runner. She was a star athlete at Southern Methodist University. She puts in dozens of miles a week, has won and placed in multiple long-distance events, and has qualified for the Olympic trials in the marathon.

The dog is now in the custody of Fort Worth Animal Control. By law, it must be under quarantine for at least 10 days until a decision on its fate is made.

According to the initial incident report, the dog has no bite history, and the owner wants the dog back after the quarantine period. The dog was not on a leash but was wearing a harness and a camouflage cold-weather vest.

Caitlin posted the pictures of her injuries on social media and agreed to a WFAA interview because she says the dog’s owner showed little or no remorse and because she doesn’t want anyone else to suffer the same physical and emotional scars.

“And can you imagine if this happened to a kid that’s 40 pounds. They wouldn’t survive,” she said. “I don’t want this to happen to anybody else. But I also don’t want people to be afraid to go out and live their lives.”

Now she waits for her own painful scars to heal, and waits for a decision on the fate of the dog as she works to find the nerve to resume her life on the road and on the run again.

To see if there are any dangerous dogs near where you live in Fort Worth, visit this site.