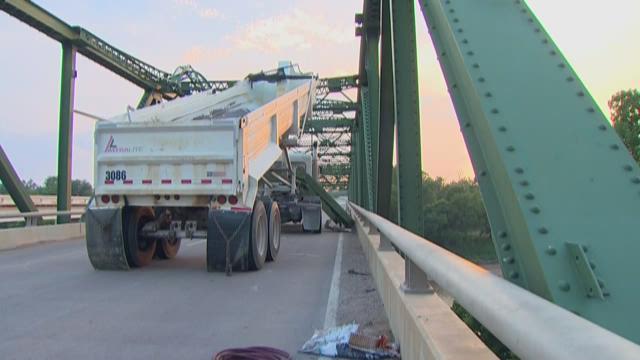 SOMERVELL COUNTY-- A huge dump truck traveling on Highway 67 got stuck underneath the beams of a historic bridge late Wednesday morning.

Crews spent hours trying to dislodge the truck’s raised bed from the iron-girder structure that allows thousands of cars and trucks to cross the Brazos River daily.

“When I pulled up, that’s exactly what was going through my mind, ‘Oh crap.’ But we’ll get it nailed out,” said Frank Roberts, one of the tow operators assigned to help clear the accident.

Roberts said it wasn’t clear if the truck malfunctioned as it approached the westbound crossing, or if the accident was due to operator error.

The driver wasn’t hurt, according to the Texas Department of Public Safety Staff Sgt. Dub Gillum. He said the man was cited for the truck being "over height."

For most of the afternoon, engineers from the Texas Department of Transportation were on site evaluating the 70-year-old structure’s stability.

A TXDOT representative told WFAA it could be anywhere from eight months to a year before the bridge is back open, although they’re hopeful it can be repaired.

Roberts said cracks were beginning to emerge on the bridge’s surface.

“I’ve never seen anything like it in person,” he said.

Traffic will be diverted to the highway’s southern bridge, which will now be one lane in each direction until repairs are finished.

The bridge was built in 1947, according to TXDOT.

It stretches nearly 1,200 feet and sees a daily traffic count of close to 8,000 cars, per details available on the website, bridgehunter.com.