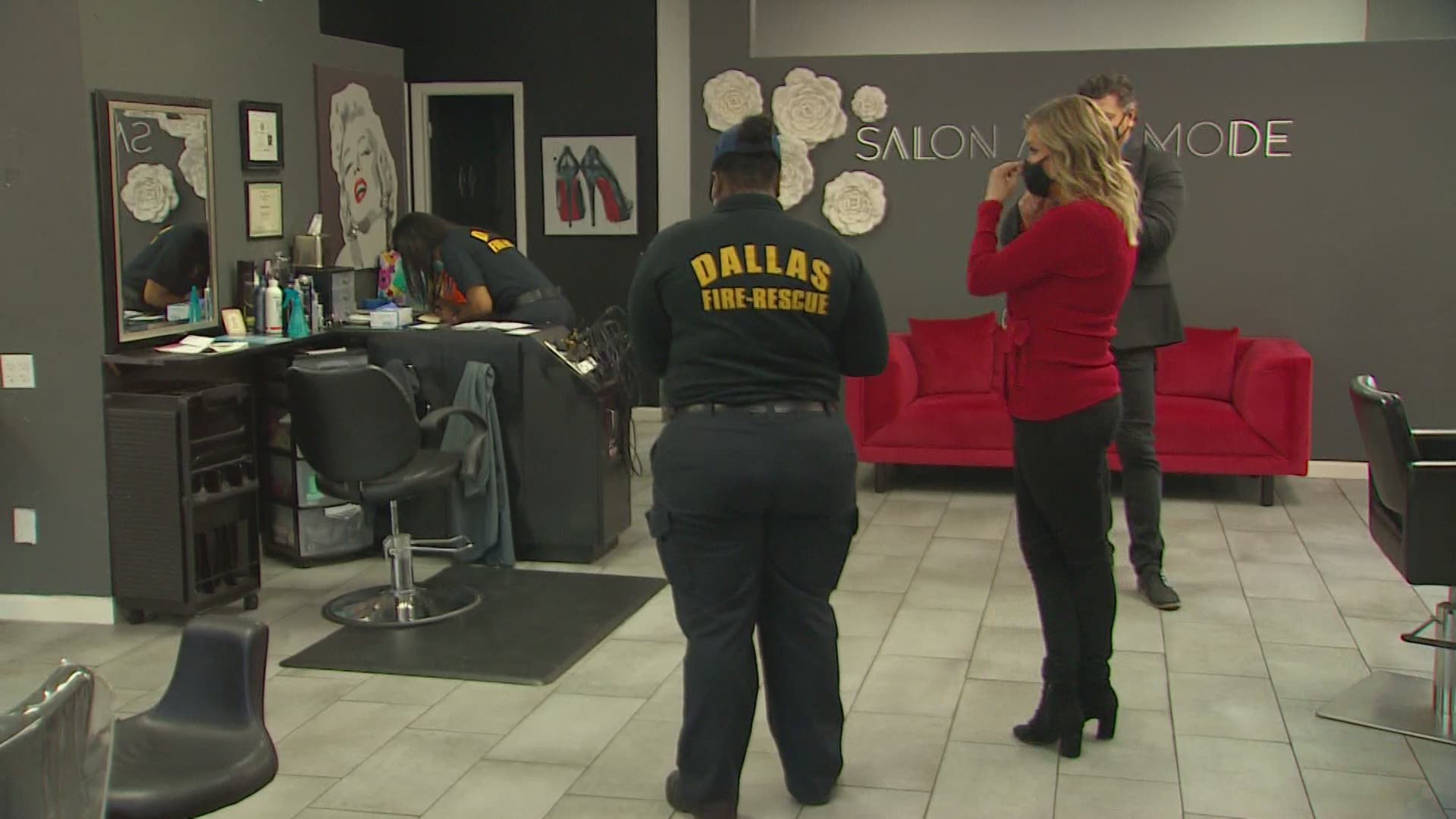 A Dallas hair salon owner was issued a citation after reopening her business, violating local and state executive orders to stay at home.

She says she plans to remain open, despite the citation and being ordered to close.

Salon Á la Mode in Dallas opened at 9 a.m. Friday. Before doors opened, she had a crowd of people outside to support Luther.

There were security guards stationed at both doors to manage incoming and outgoing guests. Each person was required to wear a facemask.

Luther carried a thermometer and took the temperatures of her customers.

Less than an hour after the salon opened, Dallas police arrived. An officer said authorities had received multiple calls complaining about this gathering outside of the salon.

Officers told the crowd to practice social distancing. They also spoke with Luther.

Dallas police officers and Dallas Fire-Rescue came and went several times throughout the morning until Luther was given a citation around 1 p.m.

According to the City of Dallas, the fine can be anywhere between $50 to $2,000 dollars. It will be up to a judge to determine the fine.

Luther told her supporters that she does not plan to pay any fines. She said she will ask her attorney, who she did not name, to handle the citation.

In the afternoon, Luther was delivered a cease and desist letter from Dallas County Judge Clay Jenkins ordering her to shut down.

The state remains under an executive order that closes all non-essential businesses and encourages residents to stay at home until April 30.

Gov. Greg Abbott has loosened some restrictions, allowing "retail-to-go" to begin Friday. But hair and nail salons have remained closed.

Dallas County has extended its stay-at-home order until May 15.

Before reopening, Luther told WFAA that she's "prepared to take on whatever it is that comes with" reopening.

The single mother said she has lost all three of her jobs — musician, makeup artist and stylist — because of coronavirus closures.

She said she chose to pay her lease on her business instead of her mortgage this month.

"I don't want to cause any problems, but when you're out of money someone has to stand up and say that they're not helping us by not letting us work," Luther said earlier this week.

It's possible Luther could face more than the city citation for reopening.

"There could be administrative sanctions or penalties issued by" the Texas Department of Licensing and Regulation based on complaints filed.

The enforcement of local and state executive orders is left up to local law enforcement, a spokesperson for the licensing agency said.

"It won't matter if I have a license because I won't have a business," Luther told WFAA this week.

She said she plans to stay open despite the citation and welcomes stylists who want to rent space at the salon.