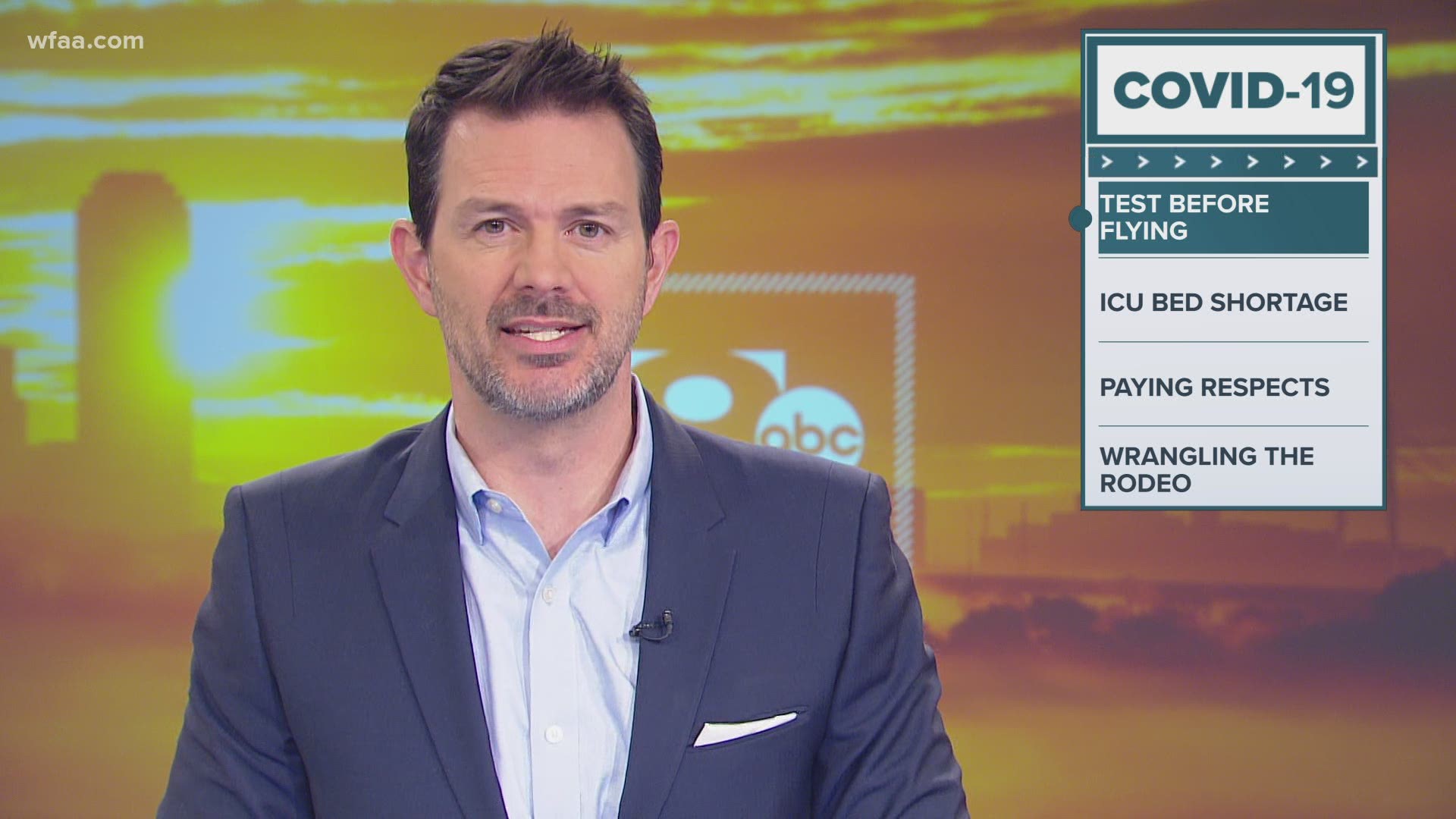 A 17-year-old in Fort Worth is the youngest person to die from COVID-19 in Tarrant County, according to health officials.

County health officials told WFAA the teen had underlying health conditions and have not released the teen's name.

In Dallas County, health officials reported 33 deaths Wednesday, making it the second-highest number of deaths reported in one day since tracking began in March.

Fourteen other deaths were also reported Wednesday in Tarrant County. The people range in age from an Everman man in his 50s to a Fort Worth man in his 90s.

According to health officials, all of the patients had underlying health conditions. Tarrant County has now surpassed 900 total confirmed deaths since tracking began in March.

Overall, there are 890 coronavirus patients in area hospitals, according to the county's public dashboard. One month ago there were 628 patients.

Cook Children's stated there 21 patients currently hospitalized due to the coronavirus. The is the second-highest record, as the hospital had 22 patients during one point in the pandemic, officials said.

The state of Texas said overall, there were 10,930 cases of COVID-19 reported Wednesday, including 273 deaths.

The deaths reported Wednesday include:

Unless otherwise noted, health officials said most of the people who died had underlying high-risk medical conditions.

Children's Health said in an emailed statement that the hospital has 14 patients who tested positive for coronavirus as of 3:12 p.m.

“Today’s report, like other record-breaking days Denton County has experienced recently, simply illustrates the reality of this infection,” DCPH Director Dr. Matt Richardson said. “Masks, distancing, and the forthcoming vaccines are the vehicles that will take us to normalcy in 2021, but we must do our part now to ease the burden on our stressed hospitals and ICUs.”

This is the county’s second record-breaking day in the last three days. Monday the county reported 592 cases.

Health experts and nurses told WFAA that the recent data is troubling for the county and for North Texas.

“Right now we can safely take care of these patients, but it’s really a call to action to the community to help us slow the spread of this disease,” she said.

RELATED: Why a shortage of ICU beds in Denton County affects all North Texans

Since tracking began in March, health officials have confirmed 27,897 COVID-19 cases, including 161 deaths.

There have been 30,232 confirmed cases of COVID-19 in the county since tracking began in March.

The Texas Department of Public Safety is expanding hours at select license offices beginning next year.

Officials said it's in an effort to help customers still needing services from closures during the beginning of the pandemic.

The Fort Worth ISD Board of Education announced Tuesday that eligible employees will receive a one-time stipend in recognition of their work during the pandemic.

Staff members who have worked with the district since July 1 and are still currently employed will receive the stipend.

"We are absolutely in awe of how everyone – teachers, principals, nutrition workers, custodians, bus drivers, and all staff have responded, adjusted and supported our kids," President Ramos said.