“If we don't encourage our people to follow the guidelines, we will lose more lives than we should,” said Richie Butler, a Dallas pastor.

Black communities across the country could be hit harder by the COVID-19 pandemic, new data from the Centers for Disease Control and Prevention reveals.

A study from the CDC released Wednesday showed that while 18% of the general population is black, black people made up 33% of those who have been hospitalized with the coronavirus.

That data suggests black communities have been disproportionately affected by the disease.

The study looked at COVID-19–associated hospitalization rates for patients admitted from March 1 through March 28 and had clinical data on patients admitted between March 1 and March 30, "the first month of U.S. surveillance," according to the CDC.

During Tuesday’s White House press briefing, Dr. Anthony Fauci, the director of the National Institute of Allergies and Infectious Diseases, suggested COVID-19 could hit the population harder because of the prevalence of underlying medical conditions in black communities, such as diabetes, hypertension and asthma.

Numbers released Tuesday in Dallas County show that the black community has seen a similar trend as the national numbers.

Of those who have been hospitalized in Dallas County with COVID-19:

While not all of those hospitalized have had their race recorded, the percentages are of the total cases for which race or ethnicity is known, according to the county's health data.

So while black people in Dallas County have made up 35% of COVID-19 hospitalizations, they make up only 23.5% of the population, according to the U.S. Census Bureau.

To combat that disparity, area pastors, community leaders and at least one doctor have launched the #Weneed2Survive campaign, a grassroots effort to address the impact COVID-19 could have on their communities.

“If we don't encourage our people to follow the guidelines, we will lose more lives than we should,” said Richie Butler, pastor of St. Paul United Methodist Church in Dallas.

The “We Need 2 Survive” campaign aims to flatten the curve by doing the following: 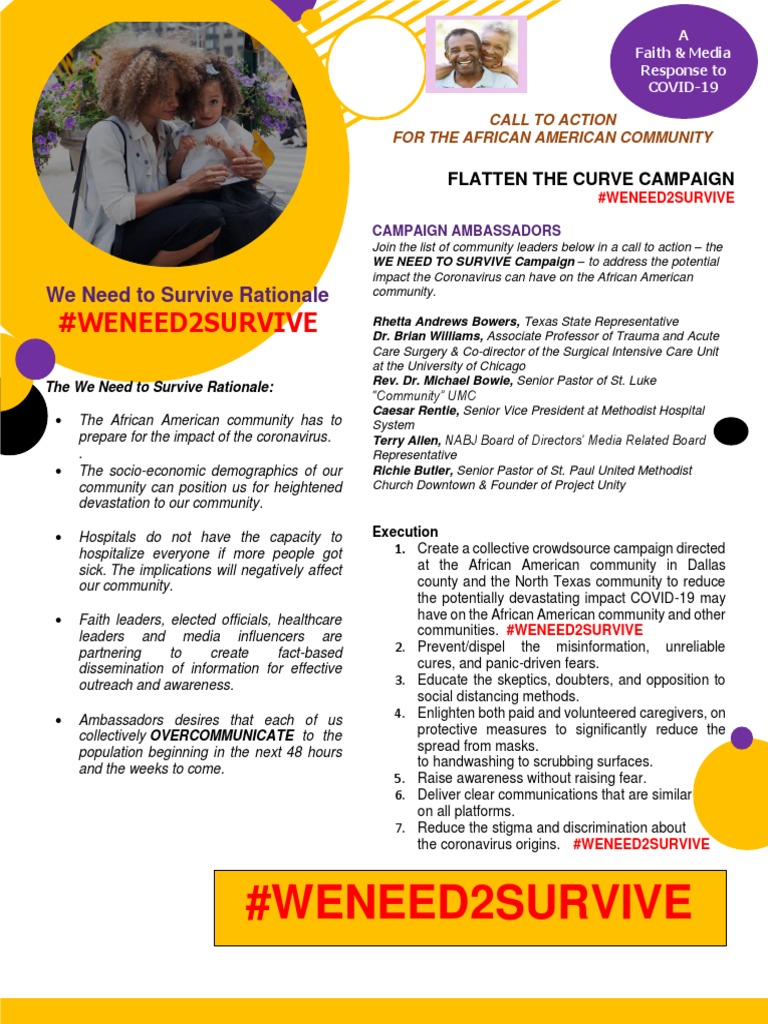 #Weneed2survive's Call to Action
CALL TO ACTION FOR THE AFRICAN AMERICAN COMMUNITY PARENT TEACHERS #WENEED2SURVIVE Join the list of community leaders below in a call to action - the WE NEED TO SURVIVE Campaign - to address the potential impact the Coronavirus can have on the African American community.We Need to Survive Rationale #WENEED2SURVIVE Rhetta Andrews Bowers, Texas State Representative Dr. Brian Williams, Associate Professor of Trauma and Acute Care Surgery & Co-director of the Surgical Intensive Care Unit at the University of Chicago Rev.

“If we're not proactive about prevention, people of color, African Americans in particular, will be the ones disproportionately impacted by this,” Butler added.

That data and the most recent map showing cases in Dallas County by zip code put things into perspective for State Rep. Rhetta Andrews Bowers, who is one of the supporters of the initiative.

“It spoke to me and it made me clearly see that our communities are being affected disproportionately,” Bowers said.

Along with the #WeNeed2Survive campaign, Bowers said members of the Texas Legislative Black Caucus are also discussing what could become widespread disparities.

“We have to start right where we are,” she said. “We have to know that some of the people in the African American community may not get help.”

Bowers plans to write a letter asking her colleagues at the state level to support her in asking for racial and ethnic data related to COVID-19 testing be released alongside other numbers already available.

She hopes those numbers will help her team and others get resources where they are needed most.

She has been tasked with looking into public health and trying to figure out how communities will be impacted.

“We're doing everything we can, not only to get the information out but to encourage our community wholeheartedly and seriously to take seriously the precautionary measures that need to be made,” Bowers said.