Surveillance video shared by the family shows the boys wandering into the yard and then climbing the ladder to the above ground pool. 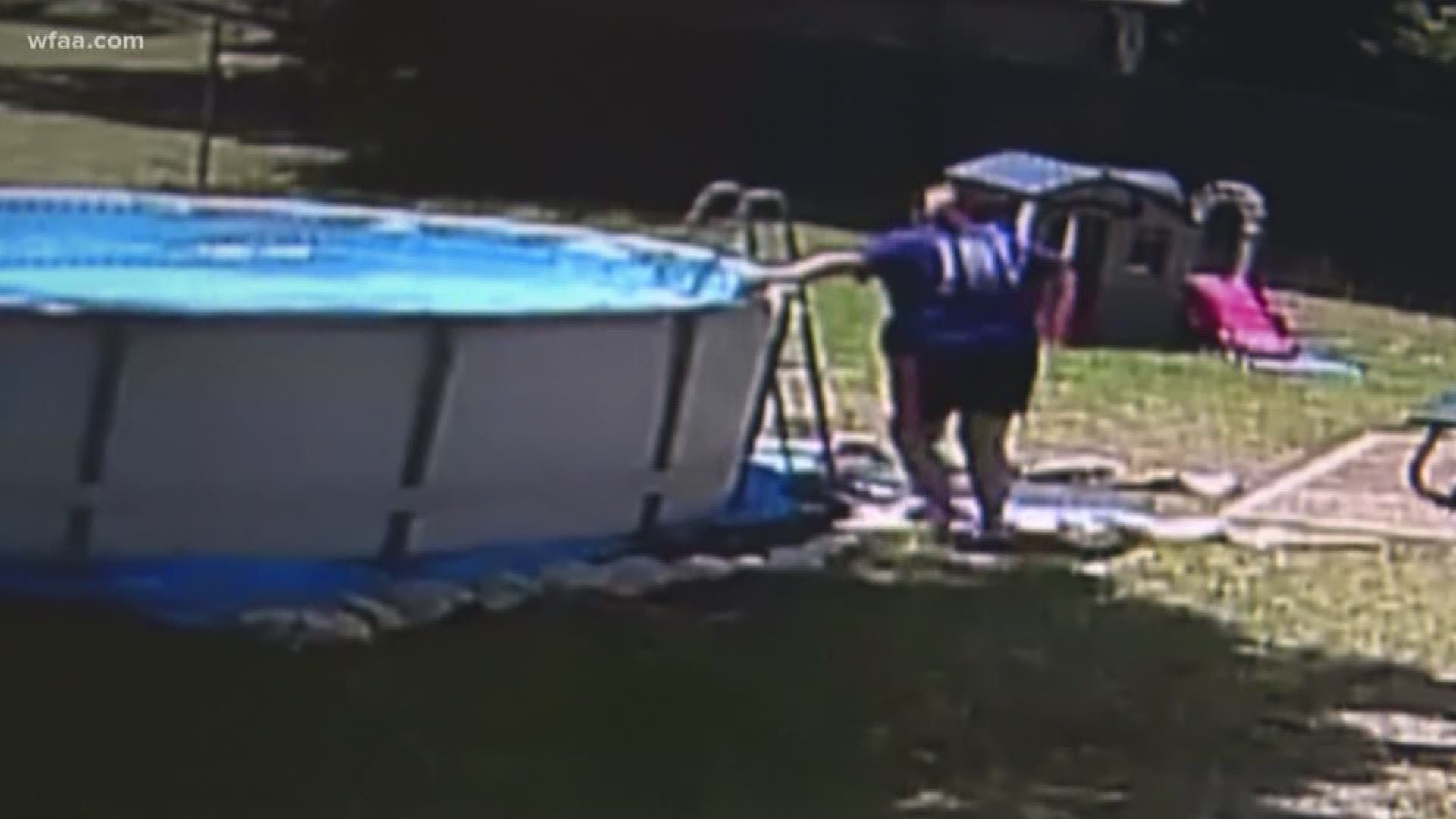 FORT WORTH, Texas -- Cook Children's hospital has recorded seven fatal child drownings this year and this week, there easily could have been two more. A family is sharing their story of a close call that they believe is a miracle.

"It was the world experience of my life. You never think it's going to happen to you," said mom, Tanah Zuniga.

Zuniga and her husband recently moved into a new home in Fort Worth. They put in an above-ground swimming pool last week for their children to use this summer.

Zuniga's sister, Karly James, lives nearby with her own children. On Monday, she was visiting with her 2-year-old son Jalen. He is best friends with his cousin, 17-month-old Elijah. "The boys were in the back room playing," recalled Zuniga.

While the two sisters were in the kitchen, they say the young boys managed to open a locked door to the backyard. Surveillance video shared by the family shows the boys wandering into the yard and then climbing the ladder to the above ground pool. "They were out [in the yard], and we had no idea," said Zuniga. "We were right there [in the kitchen.]"

The video shows what happens next. Elijah falls into the swimming pool and struggles to stay afloat. Even though neither boy swims, Jalen gets in and tries to grab his cousin repeatedly. The two-year-old then climbed out of the pool and wandered around the yard until he eventually goes back inside to find his mom. As the seconds turn to minutes, Elijah's struggling body goes limp and the water goes still.

Inside, Zuniga and James say they were shocked when Jalen came in wet. "We both kind of looked at him, and we're like, why are you wet? Next thing you know, he points to the back door and says, 'Elijah,'" said Zuniga.

The sisters rushed to the backyard, and Zuniga found her son lying sideways in the pool. He had turned blue and was not breathing. "When we pulled him out of the water, he was already gone. He was completely blue. His lips were white. He was not moving. He was not breathing," said James. "All I knew was to give him air."

James had CPR training years ago, and she said instinct kicked in as she administered CPR. Zuniga called 911, and together both sisters prayed. After she began CPR, James said Elijah began to cough and breathe.

"I was here, and I was the hands and the feet on earth, but God used me and my two-year-old to save him. There is no other explanation," said James.

Elijah was taken to the ICU at Cook Children's. Doctors there say that he not only survived, he has no signs of brain damage or any other lasting effects from his very close call.

Cook Children's doctors told WFAA this remarkable outcome is rarely seen for patients taken to the ICU in drowning cases. They said that as in Elijah's case, patients who are administered CPR effectively and have a return of spontaneous circulation tend to have a better chance of recovery.

The family believes it is a miracle that both boys survived and that a two-year-old went for help. They hope that in sharing their story, they can save other kids. "God brought my baby back. I truly believe that," said Zuniga.