John VanBuskirk was the oldest graduate in the inaugural class at the UNT Dallas College of Law downtown. 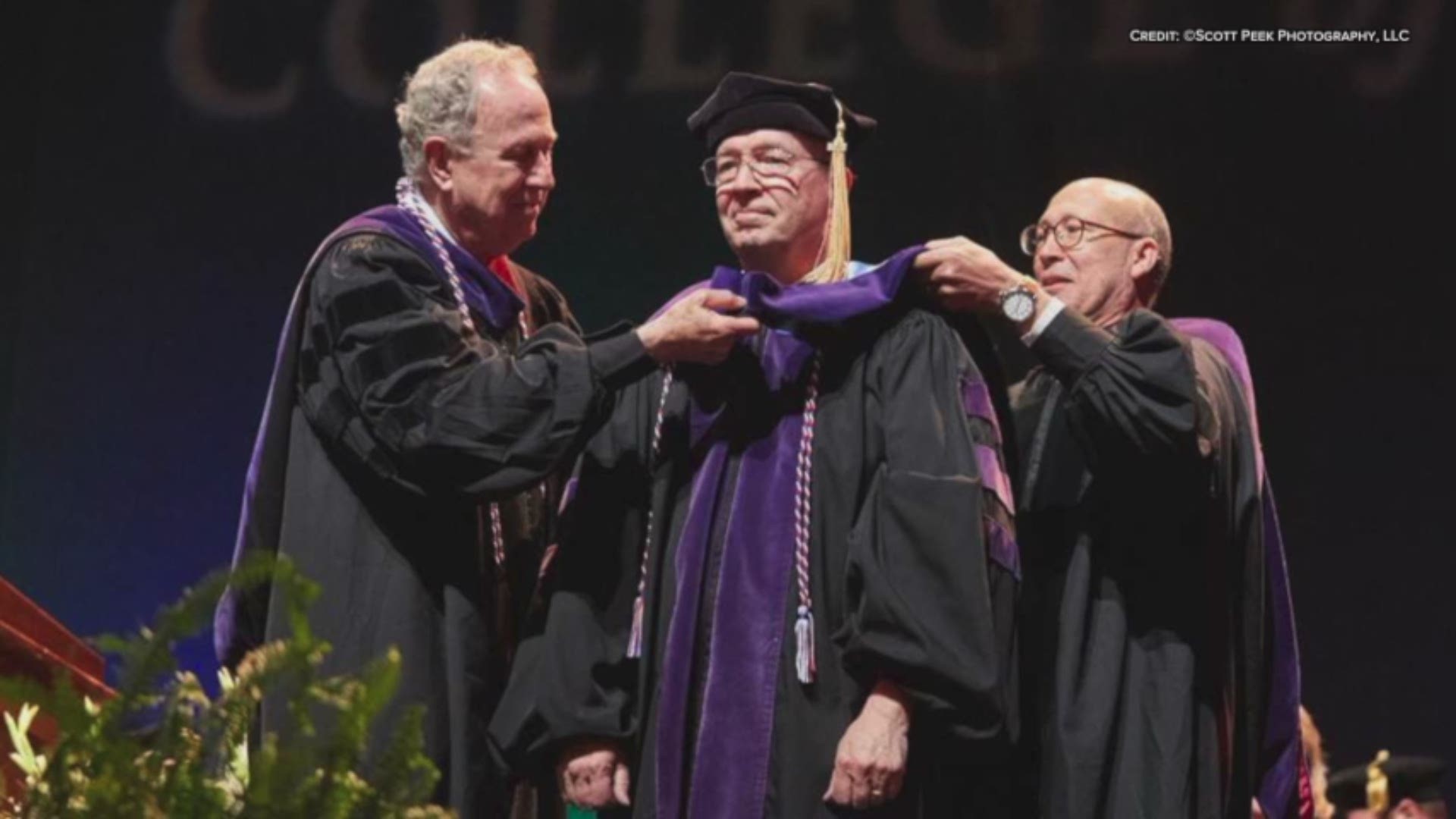 Dallas — John VanBuskirk was in his late 60s and settled into retirement when he saw that a new law school was opening in downtown Dallas.

And he got accepted.

Now, a little more than four years later, VanBuskirk, at 71, is a new member of the State Bar of Texas. In January, he was the oldest graduate in the inaugural class at the UNT Dallas College of Law.

But VanBuskirk didn't just make it through law school. He logged 800 hours of pro bono work, volunteering at clinics with the Dallas Volunteer Attorney Program and pro bono clinics through the law school. He graduated with a 3.21 GPA, making the Dean's List four times, and he earned two statewide awards for his pro bono work.

All of which slightly overshadows a small section toward the bottom of his resume: 25 years of service in the Army, where he retired at the rank of major. He spent two stints in the military, starting in Vietnam when he worked on medial evacuation helicopters and returning to service as an officer at a U.S. hospital in Germany during the Iraq war in 2006.

During his time in the military, he had an opportunity to join the Judge Advocate General (JAG) legal program but didn't meet the requirements. When he heard the UNT Dallas College of Law was opening, he decided to give the law another chance. And his wife was quick to remind him: "You're not getting any younger."

"I guess it falls under the category of different strokes for different folks," VanBuskirk said, recalling how some of his fellow officers in the military couldn't wait to go fishing and relax once they hit retirement.

"First of all, if I'm going to get up at four in the morning, it will not be for fishing. It will be for something else. Second of all, it would drive me just nuts. It would just drive me absolutely batty to sit around and do nothing."

VanBuskirk didn't have to worry about a light schedule in law school. For more than three years, this was his daily routine when classes were in session:

During the summer months, he held internships with Legal Aid of Northwest Texas, the 191st District Court, and the Wake County Public Defender's Office in Raleigh, N.C.

"Anybody could think about what you're supposed to do in law school," VanBuskirk said. "So you think about, 'OK, I'm going to have to study hard, study long hours and be committed just to the law school. That's correct. Once you get into law school, anything that doesn't fit into that thought pattern, you need to throw out."

He said his Army background – the early mornings, the structured schedules – kept him regimented.

"I've got zero problem with getting up at 3 o'clock in the morning, studying for 2-3 hours, getting another hour of sleep, then getting up for the day and going at it," he said.

But VanBuskirk's packed schedule was about more than just staying busy. The more he got involved with the pro bono clinics – learning that he could become an honorary member of the Texas Pro Bono College with 50 hours each year – the more he enjoyed them.

"Fo somebody to come in and donate 800 hours – that's amazing," said Michelle Alden, director of the Dallas Volunteer Attorney Program, which works with the Legal Aid of Northwest Texas and the Dallas Bar Association to put on the pro bono clinics. "That's incredible."

VanBuskirk couldn't give legal advice, since he was still just a student. He mostly interviewed prospective clients, filling questionnaires about their situation. But the work was rewarding.

"I had a woman come up and hug me four times just because I listened to her," VanBuskirk said. "No one would listen to her. It just makes you feel good that the little people – there needs to be an advocate for them. I think that I just kind of need to be a part of that. I just can't turn a blind eye to that."

Last month, he walked to his mailbox and found that his bar card had arrived. He was officially a lawyer. The first thing he did? Go to a few more pro bono clinics.

He's exploring several job opportunities, including on the pro bono side.

"I'm going to stretch myself a little bit and find out how I can help," VanBuskirk said. "I don't know exactly what I'm going to do when I grow up."