Driver who rammed truck into FOX 4 upset at police, wanted media 'to do their job'

Michael Chadwick Fry, 34, was identified as the suspect who rammed a pickup truck into the FOX 4 building, police sources told WFAA. 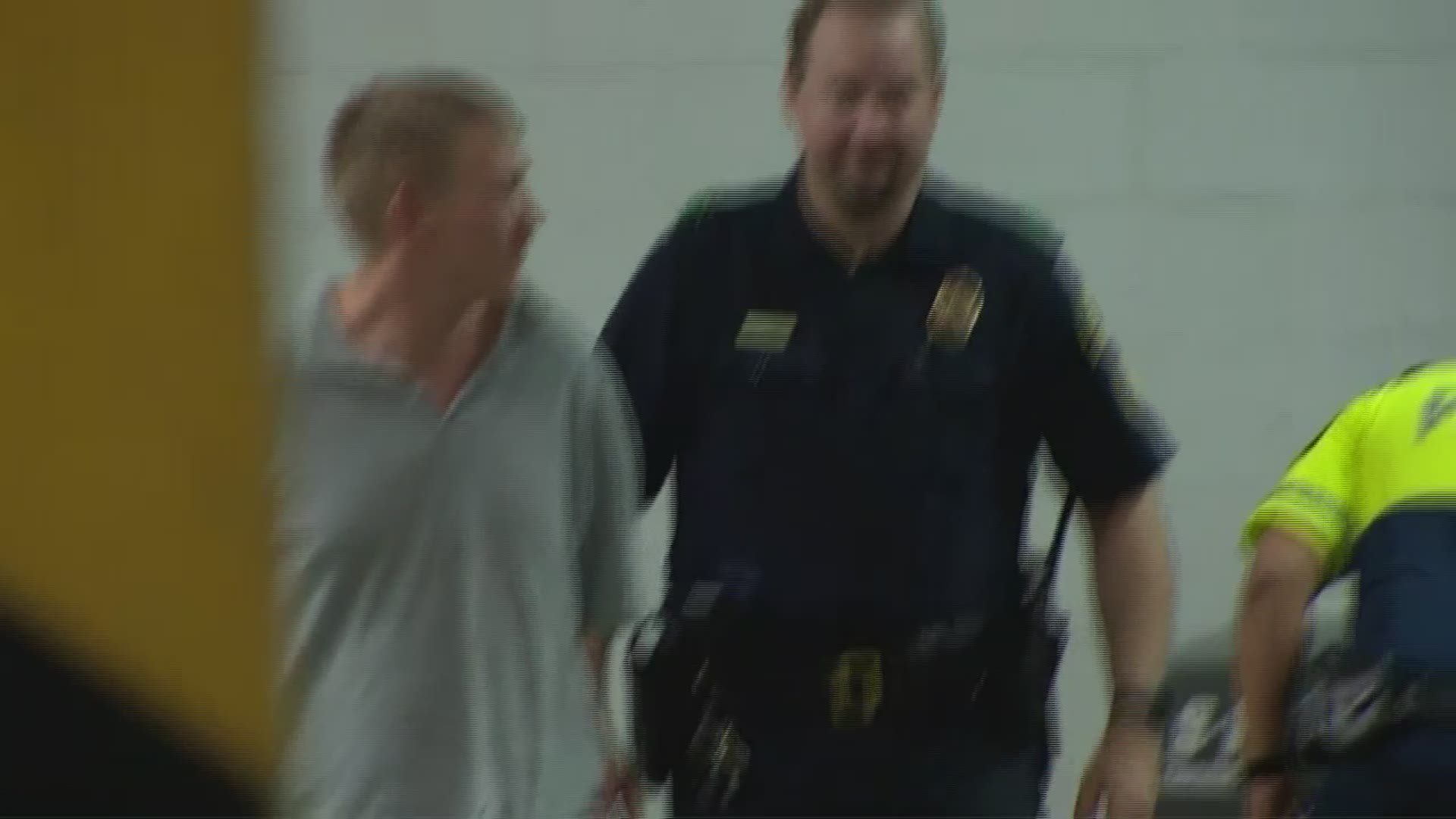 A man intentionally rammed a pickup truck multiple times into the FOX 4 building in downtown Dallas on Wednesday morning, but police said he wasn't targeting the media and the man later told reporters he was upset with police and "just wanted...the media to do their job."

As police walked him into the Dallas County jail, Fry pleaded with reporters, "Please don't let them punish me for trying to stay alive. They committed a high treason against me."

After ramming a Dodge Ram pickup truck into the FOX 4 building, Fry pulled a bag out of the truck, prompting a bomb squad investigation, but the bag was cleared, police said.

Several panes of glass were busted on the windows of the building, and a slew of papers was scattered across the parking lot.

Among the papers were printouts of a WFAA article about Fry from 2012. The article was a story about an officer-involved shooting in Denton County. A driver, Roberto Carlos Hernandez, was accused of ramming a sheriff deputy's cruiser and was fatally shot by the deputy. Fry was a passenger in the vehicle.

A printout of a WFAA article about Michael Chadwick Fry from 2012 was found near the truck that rammed into FOX 4.

The printout of the article was covered in rambling handwriting, referencing "high treason" and "witchery," conspiracies and accusing police officials of being "payed off."

"They tryed to kill me," the handwriting said. "And they missed. And hit him."

As he walked into the jail on Wednesday, Fry told reporters, "They were trying to kill me, and they missed and they killed Roberto Carlos Hernandez. Ever since I've been running for my life and I don't know what to do."

“WFAA covered the shooting in October 2012 as depicted in the printout left at the scene, and we stand by the facts in the original article. Our thoughts are with our colleagues at FOX 4 today"

When officers made contact with Fry, he was "rambling and just saying all kinds of nonsense," said Cpl. Debra Webb, police spokeswoman.

"It appears he was in some kind of agitated mental state," Webb said. "Not really sure what the issue is and why he was doing this today." 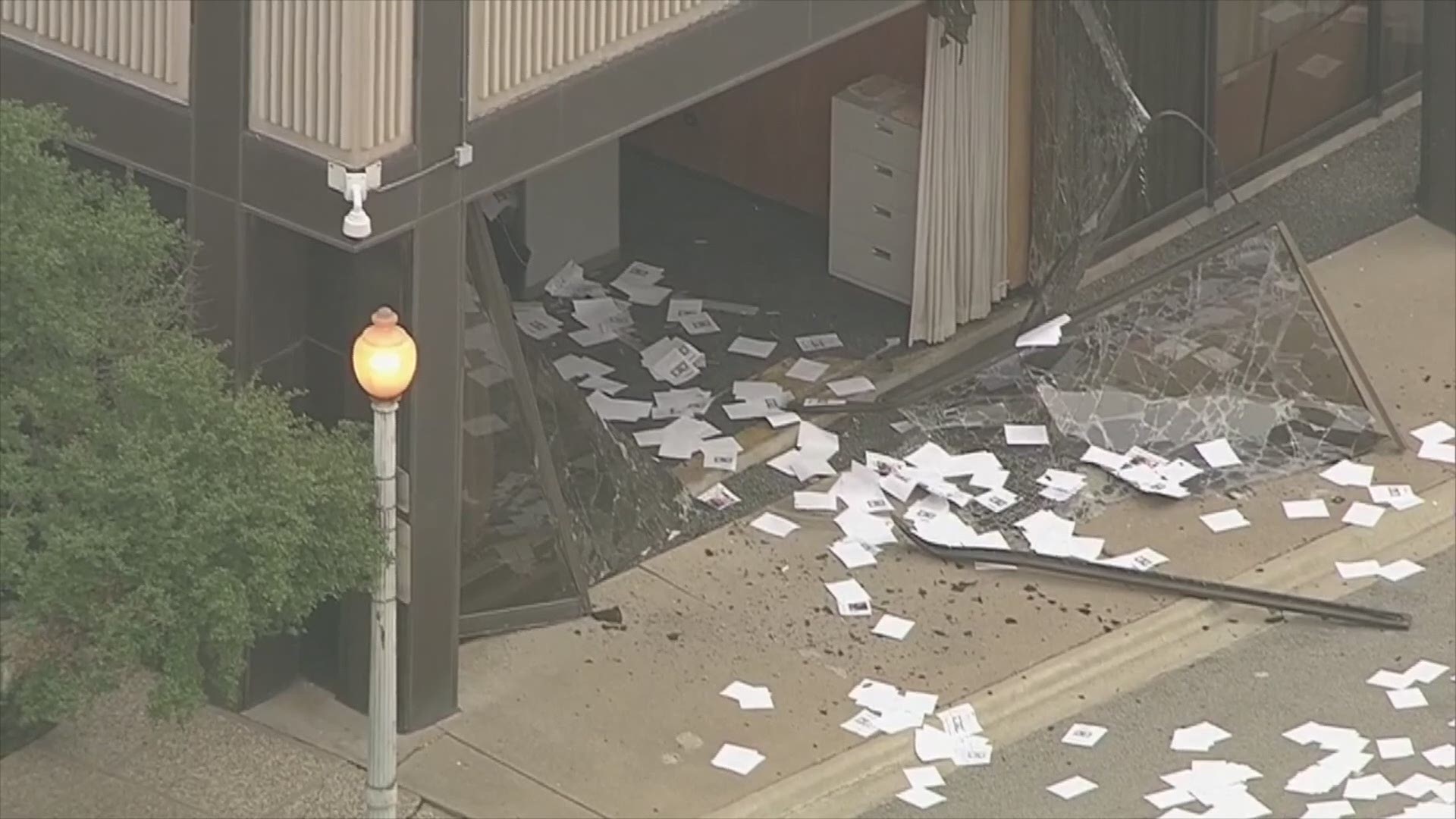 This is a developing story. Check back for more updates.

An employee at FOX4 tells me a truck crashed into their building twice this morning. Papers all over the ground. He says the driver got out screaming about treason. Employees have been evacuated. I have more details I’m trying to confirm. Standby. @wfaa pic.twitter.com/n0jrsgBygE

Happening NOW: Dallas Police at FOX4 downtown. A driver rammed his truck in to the front of the building. Shattered windows. A suspicious bag was apparently left behind. Bomb squad on scene. DART west transfer station evacuating NOW. https://t.co/P5h1VCy7xL

A man crashed a truck into the side of our building this morning. He jumped out and started ranting. He’s in custody now but the bomb squad is on its way. He left behind a suspicious bag. Most have been evacuated & a few are working to keep the news on air from a secure location. pic.twitter.com/X3UpLbYk85

The man is in custody. We evacuated and I am safe... thanks everyone for reaching out with calls and texts! https://t.co/LfZHsjD3b7