A North Texas family is joining a national campaign to advance transgender rights. 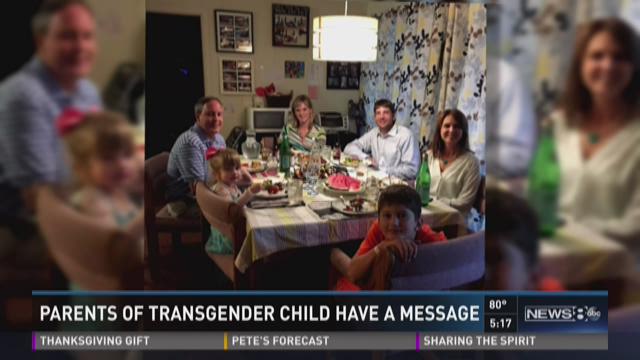 "For better of for worse, we have been kind of thrust into this role," Amber Briggle told News8 today.

Briggle and her husband Adam are parents to MG, an 8-year-old transgender boy.

"He's a normal kid. He's in third grade. He loves gymnastics and basketball and cats and Pokemon," she said.

She and her husband are now joining the Human Rights Campaign's Parents for Transgender Equality Council to help advise the organization and share their family's story across the country.

"I think we're going to bring the perspective of a family who's really kind of fighting this on the front lines," Briggle said.

They started their fight in a year where transgender kids have been the focus of a loud debate over their right to use restrooms in public schools that match their gender identity. Fort Worth's policy permitting such use drew scorn from state elected officials earlier in the year.

"We want a 15-year-old boy, full of vim and vigor that every 15-year-old boy has, walking in the girls' bathroom?" said Lt. Gov. Dan Patrick in May in an interview with News8.

The Obama Administration directed public schools nationwide to allow transgender children to use the bathroom that corresponds to their gender identity, but Texas and several other states sued to block the policy.

The Briggles went public and personal, inviting Texas Attorney General Ken Paxton to their home for dinner. To their surprise, he accepted. They shared a table in September, and the Briggles emerged hopeful that he might have different perspective after meeting MG.

But Briggle said they haven't heard from Paxton since, and he has continued to fight the Obama Administration directive, which has been tied up in court and never implemented. Under the Trump Administration, it could very well be tossed out entirely.

Briggle is concerned about what may lay ahead under a new president, but she and her husband are now more determined to continue to speak out for their son.

"We didn't choose this fight, but as long as it's being brought to us, we won't back down," Briggle said.