A musician in Dallas is dealing with road rash on his face and stitches over his eye after he says a rental scooter rider plowed into him on the sidewalk while he was leaving work. 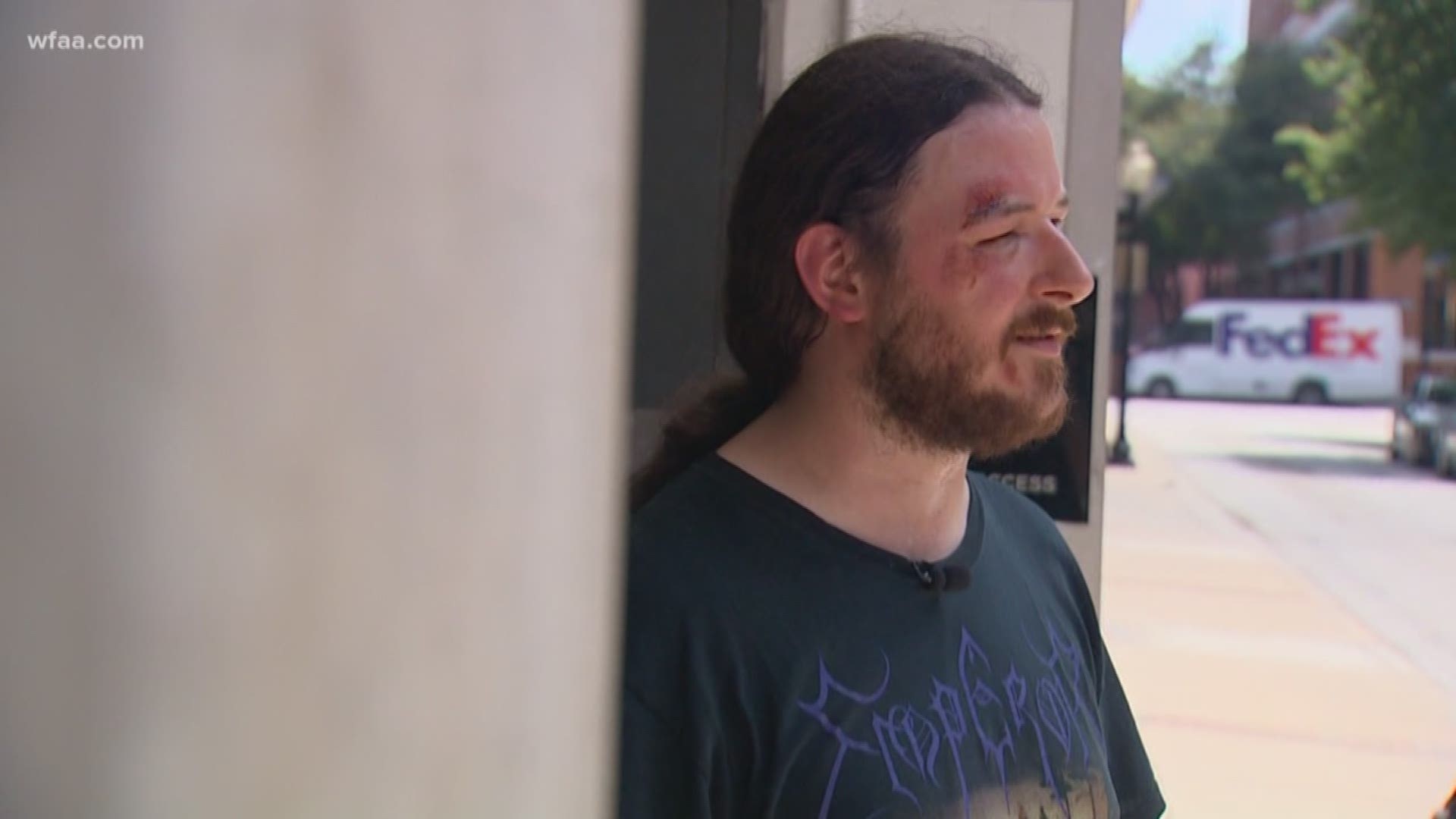 DALLAS—A musician in Dallas is dealing with road rash on his face and stitches over his eye after he says a rental scooter rider plowed into him on the sidewalk while he was leaving work.

On Wednesday, he was leaving his job in downtown Dallas near the aquarium when he says he was blindsided by a man riding a Lime rental scooter.

Daniels showed WFAA where the collision happened. He says he was walking out of a parking garage, and couldn’t immediately see anyone coming to the left of him because of a concrete wall.

“I couldn’t see around the corner, because of this wall here—I took one step past it and felt the impact,” Daniels said.

“When I opened my eyes, the first thing I saw was the scooter—and I felt the blood on my face.”

Daniels said his co-workers treated him with first aid before he left to visit an urgent care. There he received 7 stitches over his right eye.

And here’s the worst of it all, Daniels said that the rider who hit him just left the scene.

“I’m walking after a long day of work—I’m not jumping anywhere you know.”

Because the rider took off, Daniels will be paying off his urgent care bill on his own—which he said will probably cost around $400.

Daniels said he has health insurance but isn’t sure if the amount meets his deductible. “It really sucks,” he said.

Plus, Daniels said the rider was on the sidewalk. A big no-no in downtown Dallas.

Late last month, the city agreed to a 6-month trial run with electric rental scooters. They travel up to 15 mph after the rider pays a fee.

Failure to do so could get you a fine up to $500. But nobody seems to be enforcing it.

WFAA drove around Deep Ellum and Downtown Dallas for about 30 minutes Friday and noticed over a dozen scooter riders cruising on sidewalks.

“You just want to stop and scream at all of them,” Daniels said. “Get off the sidewalk.”

Lime sent WFAA a statement after asking what a pedestrian should do if they get hit by a scooter.

That statement is below:

“We do not tolerate the unsafe riding behavior of any kind and encourage riders to always be responsible and safe when operating any of Lime’s products.

To promote safe riding, we inform riders of safe riding practices both in the app and on the scooter, itself; we encourage them to wear helmets and advise against unsafe scooter behavior like performing stunts. In order to unlock a Lime scooter for the first time, all riders must go through an in-app tutorial that includes safety tips.

Together with the community, we hope to create a culture that trains people to view shared scooters and bikes as their own, and with that is creating a culture where safe, responsible use and riding becomes a natural habit.”

Daniels’ manager was able to snap a picture of the scooter involved in the accident. WFAA forwarded it to Lime’s PR team in hopes that they could identify the rider who hit Daniels.

The 31-year-old said he plans to file a police report with DPD. Officials in the traffic department told News 8 that the most someone could be charged with is assault and not hit-and-run.

If anything, Daniels just wants people who walk downtown and in Deep Ellum to keep their heads on a swivel.

Scooter accidents are already growing in places like Los Angeles and Santa Monica. On Tuesday, a Dallas woman told WFAA how she was sent to the ER after she crashed her rental scooter during her first ride.