The NTSB said "geologic conditions surrounding the natural gas pipelines" could be one of the "many potential causes of the house explosion as well two gas-related house fires that preceded it. 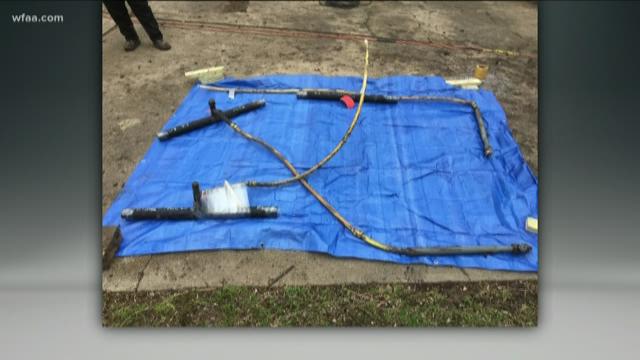 Blaming extraordinary rains, combined with shifting clay soil, for causing unprecedented leaks, Atmos announced Thursday morning that they were would be replacing a large swath of its gas distribution system to thousands of homes in Northwest Dallas.

The company made the announcement just days after a natural-gas explosion killed a 12-year-old girl and injured several of her family members on Espanola Drive. Gas service will be cut off to about 2,800 homes as Atmos replaces 27 miles of aging steel gas lines with state-of-the-art plastic pipe better able to withstand changing soil conditions.

“Their officials at the highest levels have given us repeated assurances that they will bear whatever cost necessary to take care of our residents that are affected….,” said City Manager T.C. Broadnax. “We will hold them accountable to make sure that they live up to those promises.”

National Transportation Safety Investigators remain on scene trying to pinpoint a cause of the fatal house explosion. On Thursday, the NTSB said a leak had been found in the service line to a house near the one that exploded. A six-foot-long segment of pipe was sent to the NTSB materials lab in Washington, D.C. to be examined.

The NTSB said “geologic conditions surrounding the natural gas pipelines” could be one of the “many potential causes of the house explosion as well two gas-related house fires that preceded it.

County Judge Clay Jenkins says the lines being replaced are steel pipes dating back to the 40s, 50s, and 60s. He says Atmos told him that they were not considered at risk and were not on a schedule to be replaced until the recent events unfolded.

“My concern is that we have areas of the system that are aged out, that are old, that are more subject to leaks and breaks,” Jenkins said.

Following the explosion, there were forced evacuations of about 300 houses in the immediate area as Atmos discovered more than dozen leaks. Atmos announced that it was replacing two and half miles of pipe, as well as all of the service lines for each home. With Thursday’s move, the company is now replacing more than 10 times the amount of pipe than it had previously announced.

Company officials said they had made the decision after conducting leak surveys in the area.

They are bringing in about 120 contract crews to carry out the work over the next few weeks. In addition to replacing the gas lines, Atmos also said it would be replacing all of its meters in the affected area. If problems are found with the line in the customer’s yard, the company said it would bear the expense to fix it.

“We will err on the side of safety,” said John Paris, president of the Mid-Tex Division.

Liz McManus lives in the middle of the affected area. Her home was built in the 1950s.

“It scares the hell out of me,” she says of the current situation.

The next morning, her neighbor smelled the overpowering smell of gas. He called Atmos. Workers evacuated her from her home while they replaced the line behind her house.

Last Friday, workers replaced the gas line behind her Northwest Dallas home. She'd found out later that the fatal house explosion had occurred on the same morning.

“Their explanation that they gave for the leak was because of the work that Dallas Water Utilities had been doing in the alley,” McManus said.

McManus no longer believes that explanation. She thinks the pipes were too old to bend and withstand changing soil conditions.

“We’ve had rains like this before,” she said. “We have rain like this every spring. If it was good pipe, this rain wouldn’t affect it.”

For more than a decade, News 8 has reported on the deadly consequences of Atmos' aging infrastructure. The stories highlighting tragedies associated with faulty pipe fitting known compression couplings and crumbling cast iron pipe.

Jenkins said Atmos is ahead of schedule it set to replace the pipe, but still has more than 400 miles of cast iron pipe in the older portions of Dallas.

Jenkins pointed out that some states dictated the removal of cast iron pipe decades ago.

“This is Texas,” he said. “We don't have a strong regulatory environment here in Texas.”

WFAA was there Thursday as Dallas Fire-Rescue officials came by to let McManus know that gas service to her home would be cut off. McManus has no confidence in Atmos.

“I think if the NTSB was not involved, they would not be going to this expense to do this,” she says.