Even now years after they occurred, the scale of the surgical horrors perpetrated by Dr. Christopher Duntsch is stunning. 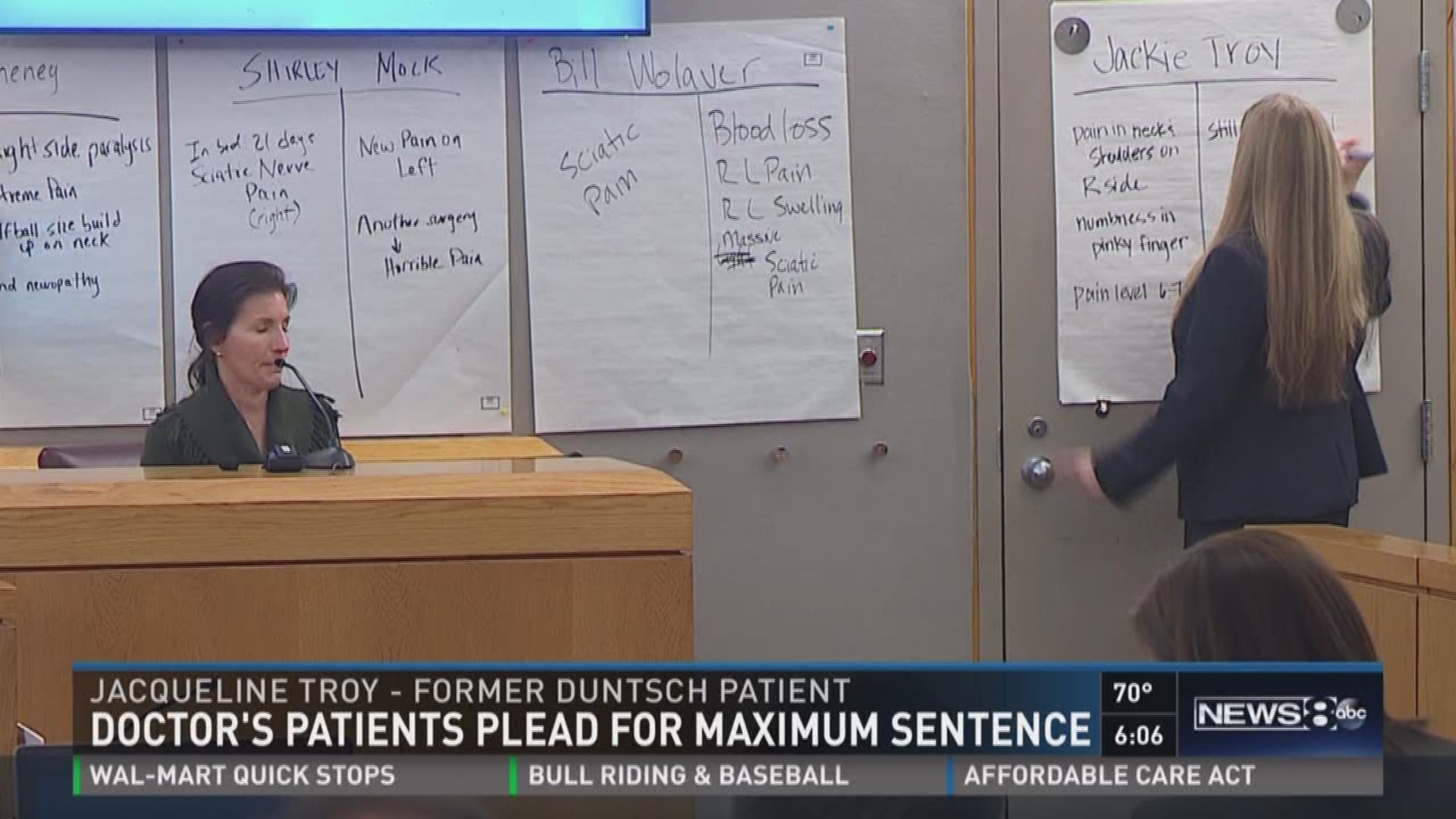 Even now years after they occurred, the scale of the surgical horrors perpetrated by Dr. Christopher Duntsch is stunning.

Over and over, a 12-member jury has heard the horror stories of what happened to his patients, how it ruined their lives and how they were left in constant pain.

Jurors were told how the former neurosurgeon repeatedly misdiagnosed patients, undertook surgeries that didn’t need to be done and performed botched surgeries on the wrong portion of a spinal cord. Doctors, nurses and other medical professionals testified that they never encountered anyone in the medical profession like him.

“My personal suspicion is that this is somebody who has no conscious, no empathy,” Dr. Martin Lazar told the jury Friday. “This has the appearance that the patients are treated like cannon fodder. They were just there to be operated on.”

Jurors convicted Duntsch Tuesday of injury to an elderly person in the botched July 2012 surgery that put Mary Efurd in a wheelchair. For the last three days, jurors listened to testimony in the punishment phase of the trial. Defense attorneys are expected to call several members of Duntsch’s family Monday. Then it will be up to the jury to determine his punishment. He could receive up to life in prison.

Every day, investigators have wheeled in boxes of records from those botched surgeries. Jurors look at the faces of patients maimed, paralyzed or even killed in Duntsch's surgeries.

Jacqueline Troy now can speak barely just above a whisper. Troy told jurors how she nearly died after a surgery performed by Duntsch in December 2012.

Her esophagus had been pinned under a plate that he placed near her spine. Her trachea had holes punctured in it. Her body was ravaged with infection. Doctors had to put in a feeding tube because food was getting into her lungs. She was sedated for weeks. She lost one of her vocal cords.

Tom Troy, her husband, was emotional as he described the agonizing weeks when he didn’t know if his wife was going to live or die from what was supposed to be surgery to help back pain from a bad car accident.

He called her brother out of state, telling him he should come immediately because she might not make it. His wife woke up not knowing what had happened to her.

Jurors cried as they listened to the Troys testify.

Lazar, who reviewed the medical records for prosecutors, called the surgery “an unmitigated disaster.” The plate that was supposed to be in her spine was put in the wrong place.

In fact, the neurosurgeon testified that there was no reason to even do surgery on her.

During the June 2013 surgery, Duntsch left a sponge in his neck and cut his esophagus. At one point during the surgery, Duntsch thought he had found a tumor in Glidewell’s neck. That tumor ended up being muscle.

“He apparently bit into that structure not recognizing it as muscle,” Lazar said.

“It looked like Christopher Duntsch tried to decapitate Mr. Glidewell,” Kirby said. “I'm not kidding you.”

Kirby was already familiar with Duntsch’s surgical nightmares at Baylor Regional Medical Center in Plano. He had been in the surgery when Duntsch botched the 2012 surgery of Barry Morguloff. He was also familiar with the case of Jerry Summers, who was left a quadriplegic.

Kirby said doctors had to remove the sponge left in Glidewell and fix his esophagus. Another doctor performed surgery to stabilize his spine. He would have become a quadriplegic if doctors had not acted.

“This has not happened in the United States of America, where you can do such a procedure and have such complications: leave sponge, knock a hole in someone’s esophagus, take out the recurrent laryngeal nerve, take out the vertebral artery and just leave the patient there without any attempt to transfer,” he said.

Glidewell’s surgery was the last that Duntsch would perform.

Kirby testified that he sent a thick package to the Texas Medical Board containing the records of Morguloff, Summers, Troy, Glidewell and Kellie Martin, a school teacher who had died in a botched March 2012 surgery.

“They were forced to do something then,” he said. “It was obvious that something had to be done.”

By then, several doctors already been calling and writing the medical board asking that something be done about Duntsch to prevent more patients from getting hurt.

“The Texas Medical Board is not set up to stop someone like Christopher Duntsch,” he said. “They’re just not set up for it.