Jonathan Moore has five prior DWI convictions, and his probation in one of the cases ended just days before the deadly crash. 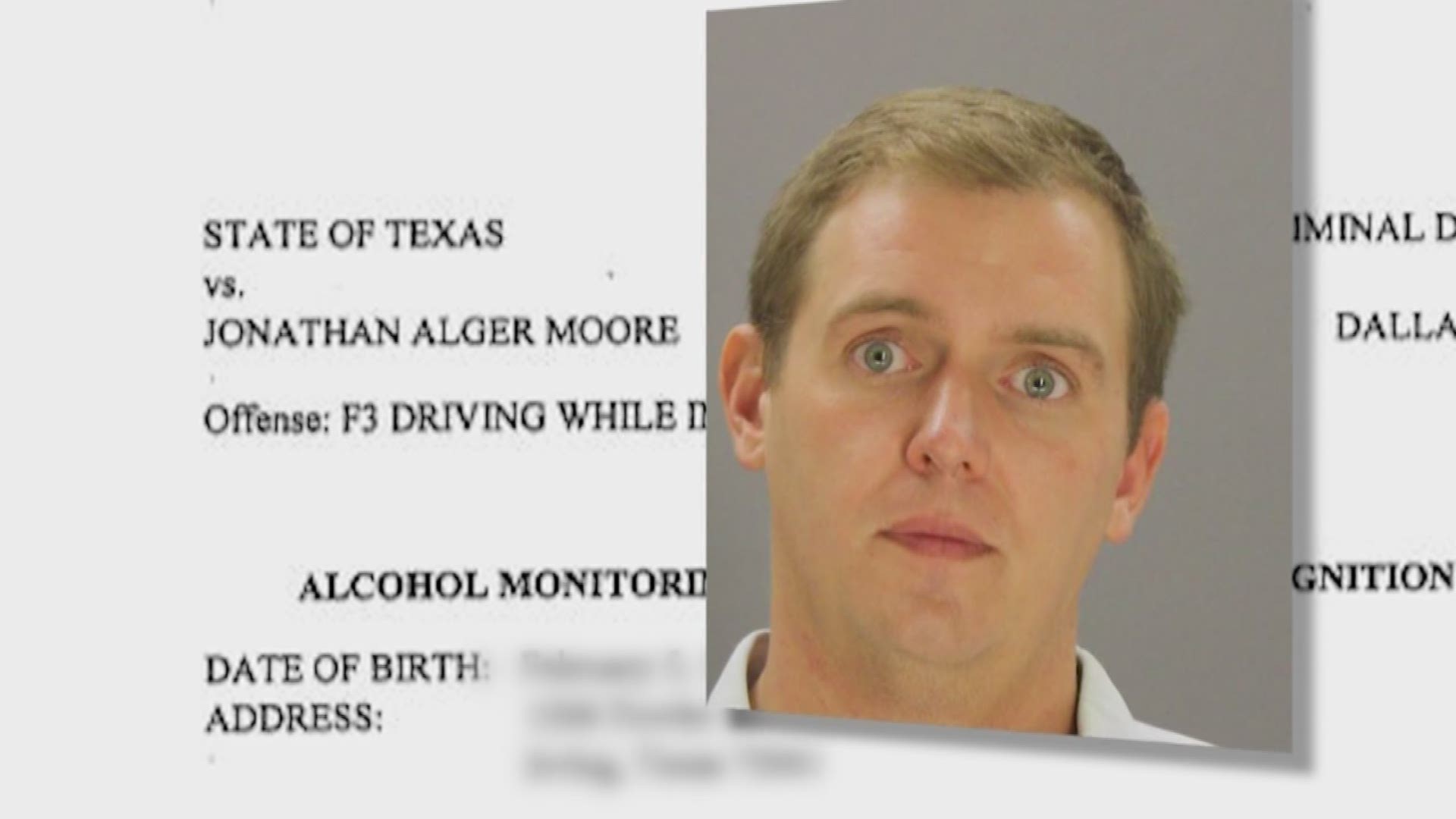 Updated at 1:23 p.m. Wednesday to reflect another charge against Moore.

A 36-year-old man was high on drugs when he drove the wrong way and crashed into a car carrying former Dallas councilwoman and her daughter, killing the mother and critically injuring the younger woman, an arrest warrant shows.

He was remotely booked in the Dallas County jail Wednesday morning. He also faces a misdemeanor charge of driving with a suspended license.

Bail has not been set yet, and Moore remains hospitalized, officials said.

Moore has five prior DWI convictions, and his probation in one of the cases ended just days before the fatal crash. And court records show he only went to state jail once after his probation was revoked in 2011 for an earlier case.

Several of the cases indicate Moore was impaired from drug use, not alcohol, the records show.

An alcohol monitoring device and an ignition interlock device were both removed because his probation had expired July 10, according to a court order signed by State District Judge Dominique Collins.

"It’s shocking. I mean this is his fifth DWI arrest," said Mike Mata, president of the Dallas Police Association.

Mata said it's unacceptable that Moore was repeatedly allowed to walk free after receiving minor punishments for routinely getting behind the wheel while impaired.

"This man shows he does not care about the citizens of Dallas County and the Dallas County courthouse should do something about it," he said.

An arrest affidavit describes Moore’s mental state at the scene of the fatal crash and afterward in the hospital.

He told witnesses at the scene of the crash that he had fallen asleep while driving and told a paramedic that he had taken a Xanax, according to an arrest warrant affidavit.

Witnesses told police that they were in a car driving behind Moore’s blue Mazda and saw the SUV cross from the eastbound lanes on Ledbetter Drive onto the westbound lanes and crash into the blue Oldsmobile, the warrant says.

The pair tried to help Moore out of his vehicle, but the door was “jammed shut,” the arrest record says.

When an officer went to the hospital to talk to Moore, the officer heard the man telling a nurse he was there for a “penile enhancement procedure.”

Moore “began laughing as though he was making a joke,” the warrant says.

He claimed he was driving from Highland Park and was driving home at the time of the crash. He told the officer he didn’t know what road he was on, the warrant says. Records show Moore lives in Irving.

Moore also told the officer that he has a “mild form” of diabetes. He said he was not on any medication and had not been drinking. He also denied taking Xanax, the warrant says.

He failed a sobriety test and his eyes appeared bloodshot. Investigators got a search warrant to draw blood to test for intoxicants, records show.

A breath test did not detect alcohol, the arrest warrant says.

Moore has a lengthy criminal record indicating a history of drug and alcohol abuse.

Credit: Jail records
Jonathan Moore has a lengthy criminal history, including arrests from December 2004 through July 2014.

In 2011, Moore was sentenced to two years in state jail for after his probation was revoked in the 2006 Dallas County case.

He was in state jail from July to September 2011. He remained on parole until October 2012.

Moore was arrested again in March 2013 after a police officer saw the man stop his car in the middle of the road, police records show. Moore got out of the car and went around to the passenger side. The officer could smell marijuana on Moore, records show.

At the time, Moore told the officer he had “smoked three marijuana joints,” according to an arrest warrant affidavit.

He was convicted of felony driving while intoxicated in July 2014 as part of a plea agreement. He was sentenced to 10 years in prison but received a probated sentence of five years, court records show.

In January, Moore’s car was totaled, and he was required to put an interlock device on his new vehicle, court records show.

Mata told WFAA that judges and prosecutors weren't tough enough on Moore and took the stance Tuesday that Davis' death could have been prevented.

"We cannot protect our citizens if the courthouse doesn't do their part," Mata said. "The legal system has to work with us not against us or we're going to continue to see dead people on the street."

"It's not necessarily that clear-cut," Harris said.

Harris has logged 11 years as a prosecutor and thinks that Moore wasn't given serious jail time because he never hurt anyone.

"That's pretty strong especially when no one has been injured and even then you would be looking at a higher charge," Harris said.

Harris also added that probation, in some cases, can often be a better road than prison time.

"Let's say that you give a guy ten years in prison. He's eligible for parole after serving a quarter of his time at 2.5 years. If he gets out then he'll have to report to parole and they might not have all the restrictions that probation would," the attorney said.

Moore faced some of those restrictions for five years, and Harris argues it may have been a better option than seeing him get 10 years in prison and then out in under 3 years.

"It's more rigid most of the time," Harris said. "And if he violates probation he goes to prison anyway."

Harris also added that drug-related DWIs can be harder to prove, and Moore's cases were primarily drug-related.

He said that plea bargains are often seen because the burden of proof can be harder for officers and prosecutors to meet.

The evidence can be entirely scientific, test-related, and relies on a blood draw.

Sometimes, an expert must be brought into a trial and that an officer's testimony and field sobriety tests don't wholly earn a conviction.

Either way, he said that the judges and prosecutors who dealt with Moore the last ten years will have trouble sleeping.

"It's a prosecutor's worst nightmare. Someone you dealt with and gave probation to ended up harming or killing someone," Harris said.

There is no excuse for someone to get behind the wheel of a vehicle impaired. This was a violent crime and MADD advocates for the offender to be prosecuted to the fullest extent of the law. It is not acceptable for our court system to release any offender, let alone a repeat offender, back on the streets with simply a slap on the hand. If in fact, this is a five-time offender, he/she should have been behind bars a long time ago. Shame on the judge who turned this criminal loose to harm again.