"This must change now," said Mayor Eric Johnson in a letter to the city manager asking city staff and the Dallas Police Department to develop a crime plan.

This story has been updated with statements from council members.

Dallas Mayor Eric Johnson said the crime rate in the city this year is “patently unacceptable” and is requesting a “comprehensive written plan to reduce violent crime” by the end of the year.

In a letter addressed to City Manager T.C. Broadnax, the mayor said he and the Dallas City Council have not received a “sufficiently clear explanation” from the Dallas Police Department about what is driving an increase in violent crime this year.

The letter was sent to Dallas City Council members on Tuesday. Several council members said they were supportive of the mayor's requests.

Dallas is on pace to have at least 200 homicides this year and has seen a sharp increase in the number of robberies and aggravated assaults reported this year.

"It's our job as elected officials to make sure that T.C.'s administration is doing an adequate job,” said Jamie Resendez, the council member representing southeast Dallas.

Johnson and council members said they are frustrated with the lack of a crime-fighting plan.

"Our city is hurt. My district is hurt. I didn't know what it was going to take,” said council member Adam Bazaldua, who represents South Dallas.

As of Monday, there have been 192 homicides, and assaults involving guns are up about 27% compared to last year, and robberies are up 14%.

The mayor wrote in the letter to Broadnax the sharp increase in the assaults and robberies “is perhaps an even better indicator that violent crime is truly on the rise in our city.” 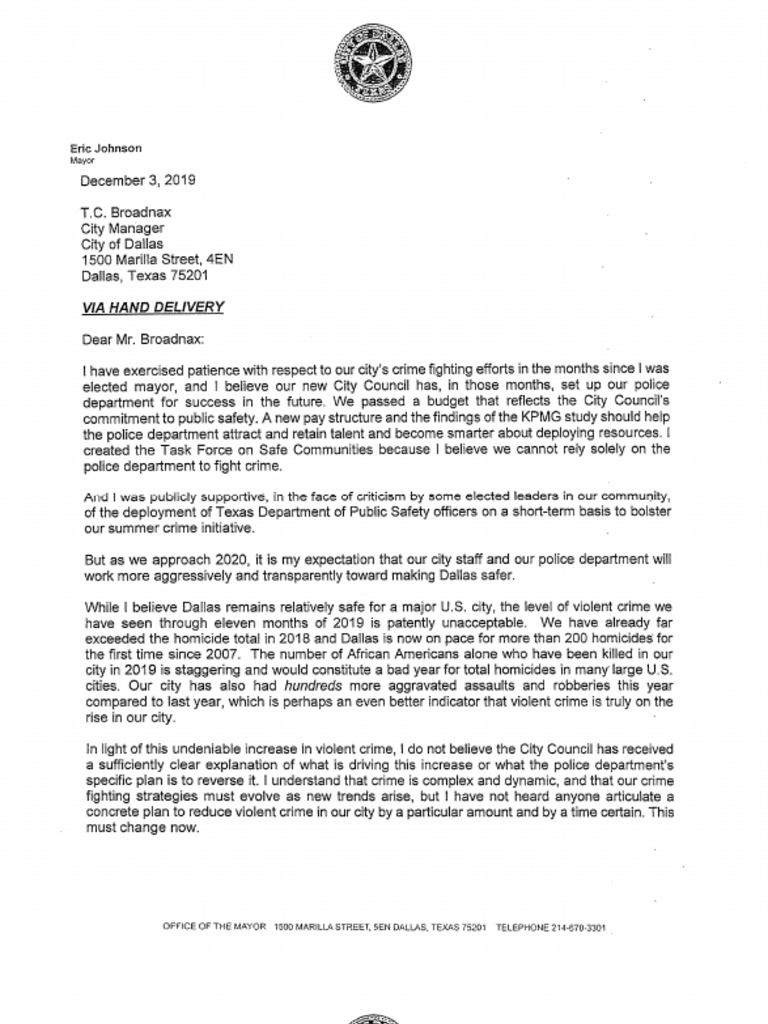 Johnson sounded especially troubled by the number of black people who have been killed this year — 127 of the 192 homicide victims were black.

Of those killed, 46 were Latinos, 17 were white and two were Asian-American.

"The number of African Americans alone who have been killed in our city in 2019 is staggering and would constitute a bad year for total homicides in many large U.S. cities," Johnson wrote.

In August, the mayor announced the creation of a task force to tackle the issue, saying the police department can't do it alone.

But, he wrote this week that he has seen no specific explanation for the increase in violent crime nor a plan to fix the problem from the leadership of the Dallas Police Department.

"We cannot continue to accept the status quo or tolerate excuses when it comes to violent crime," Johnson wrote. "While we all have roles to play to make our communities safer, we need our police department to lead the way."

During the summer, Dallas police Chief Reneé Hall requested help from the Texas Department of Public Safety to patrol the city's streets.

But many in the southern Dallas community complained, saying they felt they were being targeted by the state troopers.

During a seven-week period, troopers made about 9,000 traffic stops, many in South Dallas.

The mayor said he was "publicly supportive" of the deployment of state troopers during a summer crime initiative, but he now expects a clear and aggressive plan to reduce crime in the city.

Bazaldua said in August that he wanted the troopers out of his district and spread throughout the city. He said Tuesday that changes must be made within the City and Police Department.

In the letter, the mayor also asked City staff and the Police Department to more clearly present violent crime data, saying the information is too difficult to understand.

“Our increasing crime rates are unacceptable. I support the Mayor’s insistence on a concrete plan of action from the City Manager and DPD," said council member David Blewett, who represents parts of East Dallas and Old East Dallas.

Blewett said he looks forward to hearing the crime reduction plan in January, as requested by the mayor.

Dallas police officials did not respond to a request for comment.