1 dead in shooting at Colorado STEM school, 2 suspects in custody

An 18-year-old male student and a juvenile transgender male are in custody. Two injured students remain in the hospital. 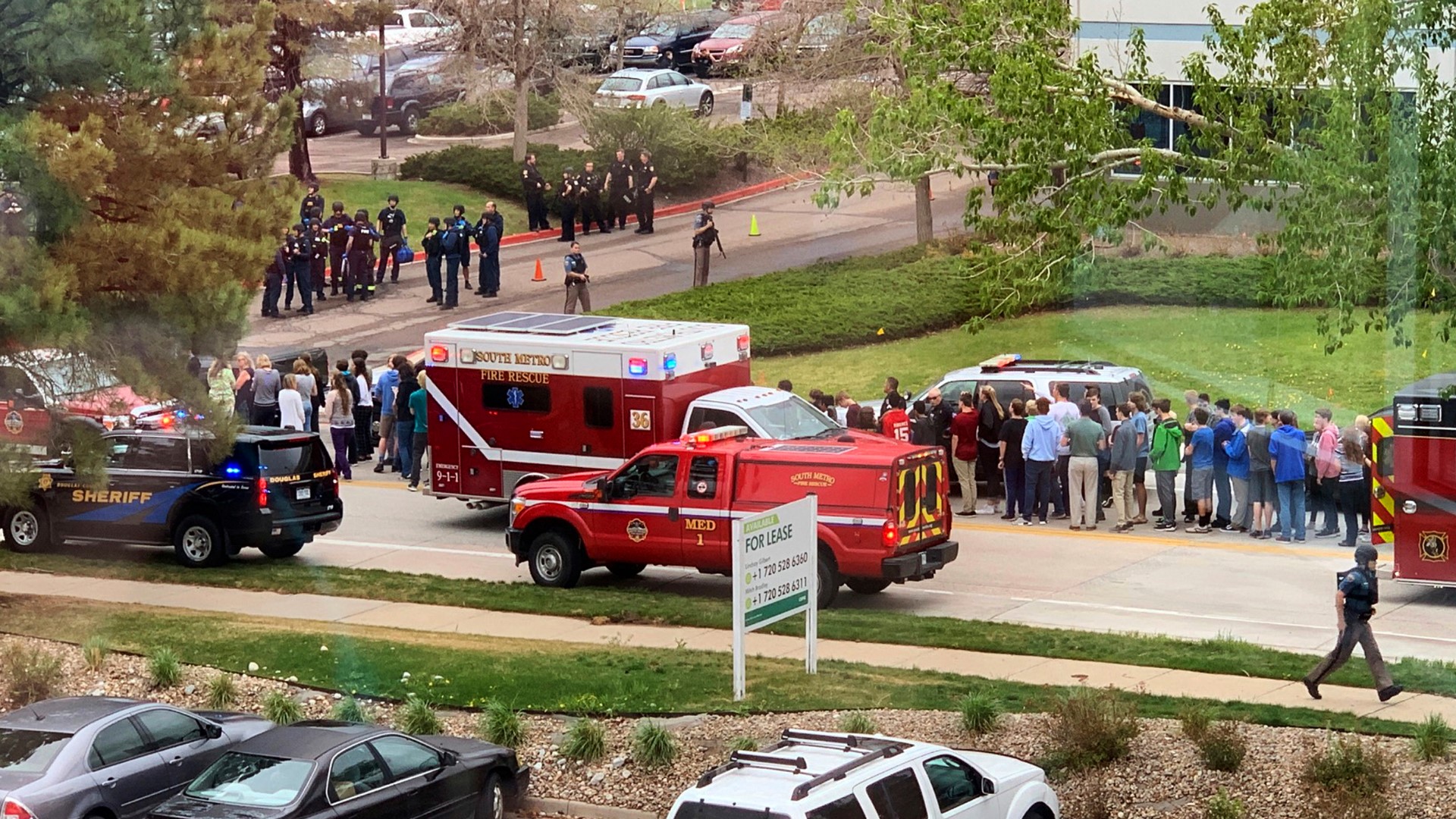 HIGHLANDS RANCH, Colo. — The 18-year-old student killed at STEM School Highlands Ranch was just set to graduate from the school later this month.

Kendrick Castillo was shot and killed inside the school on Tuesday when two classmates opened fired, according to the Douglas County Sheriff's Office. The last day for seniors was supposed to be Friday and a graduation ceremony is scheduled for May 20.

Eight others were shot after two shooters walked into the campus’ high school at South Ridgeline Boulevard and Plaza Drive at around 1:50 p.m. Tuesday and opened fire on their classmates in “two separate locations,” Douglas County Sheriff Tony Spurlock said.

On Wednesday the sheriff's office said it was seeking information from the public about the shooting and the suspects. They directed people with information to call their major crimes tip line at 303-660-7579.

The school does not have metal detectors and it was not assigned a school resource officer, according to the sheriff's office.

The suspects were armed with at least two handguns, Spurlock said on Wednesday. Under Colorado law, neither of the suspects is old enough to purchase a handgun.

In wake of the shooting, hundreds of parents flooded a nearby recreation center to reunite with their children, who were led out of the school and loaded into buses. Some of them were as young as kindergarten age.

"This is a terrible event," Spurlock said. "This is something that no one wants to have happen in their community ... and we will get to the bottom of it to figure out how and what has occurred."

1 / 43
AP
Police officers and students are seen outside STEM School Highlands Ranch, a charter middle school in the Denver suburb of Highlands Ranch, Colo., after a shooting Tuesday, May 7, 2019. (Courtney Harper via AP)

Castillo was shot when classmates said he lunged at one of the gunmen, which gave other students time to get underneath their desks or run away to safety.

In an interview with NBC on Wednesday, Castillo’s parents, John and Maria Castillo, said they were very proud their only son did what he had to do to protect other students when one of two gunmen walked into a 9th period class and started firing.

RELATED | 'He wanted to be a hero’: Parents of STEM School victim Kendrick Castillo mourn loss of son

The Douglas County Sheriff’s Office said the youngest victim in the shooting is 15 years old. All eight of the patients who were hospitalized are students at the school, Spurlock said.

Littleton Adventist Hospital confirmed that it received five patients. One of them remained at the hospital as of Friday morning. Three were discharged Tuesday, according to spokesperson Wendy Forbes. One was discharged Friday morning.

Children’s Hospital Colorado said it received a victim at its South Campus location who was treated and released, a hospital spokesperson told 9NEWS.

Sky Ridge Medical Center said it treated two juvenile patients. Both have since been discharged.

The identities of the surviving victims have not yet been released.

The shooting and the suspects

Spurlock said as soon as gunfire rang out in the suburban Denver school, administrators called the dispatch center. Deputies arrived amid continuing shooting two minutes later and found the two suspects, one of whom was armed with a handgun.

Deputies took both suspects into custody separately. Sheriff Spurlock said Wednesday morning that no gunfire was exchanged between deputies and the suspects. No members of law enforcement were injured.

"I have to believe that the quick response of the officers that got inside that school helped save lives," he said.

One of the suspects, 16-year-old Maya McKinney, is a transgender male who goes by Alec. He appeared in juvenile court alongside his mother on Wednesday afternoon, and will be held without bond until his second appearance at 1:30 p.m. on Friday, when the prosecution will determine whether to try him as an adult.

The other is 18-year-old Devon Erickson, according to the Douglas County Sheriff's Office, who does not have a criminal history outside of a Feb. 13, 2018 ticket in Douglas County for careless driving.

Erickson is being on suspicion of 30 counts, according to court documents. They include:

He appeared in court on Wednesday.

RELATED: No Notoriety: Should journalists share names, faces of killers?

Investigators were expected to search a black Honda Civic in the school parking lot and a home in the 1900 block of Mountain Maple Avenue on Tuesday evening.

According to Douglas County property records, this home is owned by James and Stephanie Erickson. It was cordoned off on Tuesday night with yellow crime scene tape and had a large police presence outside.

In a news conference, Spurlock declined to go into detail about the suspects, citing the ongoing criminal investigation. He said he doesn’t have any evidence that the suspects were already on the radar of law enforcement.

STEM School Highlands Ranch is a K-12 charter academy focused on science, technology, engineering and math education in the Douglas County School District. It was founded in 2011 and has grown to more than 1,850 students, according to the school’s website.

Spurlock said the campus does not have a dedicated school resource officer, and instead contracted out its security.

Class will be canceled at the campus throughout the end of the week. All other Douglas County schools will be open with heightened security.