Bloody eyeglasses among Bonnie and Clyde artifacts to be auctioned

In addition to the glasses are Dallas County’s original arrest warrants for the outlaw couple, a button from the shirt Clyde Barrow was wearing when he was killed, and a ring that few people knew about until now. 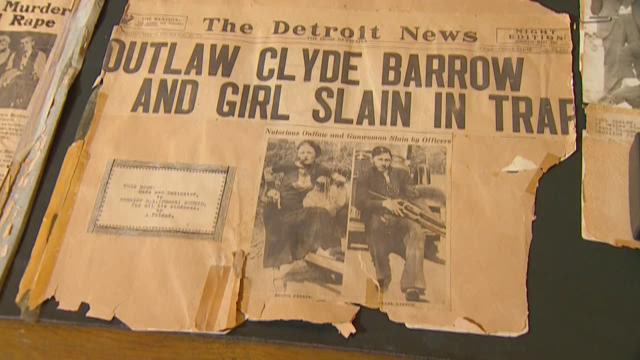 A pair of eyeglasses, stained with what appears to be blood, and said to have been worn by Bonnie Parker when she was shot to death in 1934, are among items belonging to Bonnie and Clyde that will be auctioned in June.

In addition to the glasses are Dallas County’s original arrest warrants for the outlaw couple, a button from the shirt Clyde Barrow was wearing when he was killed, and a ring that few people knew about until now.

"When you have a ring that was made by Clyde, given to Bonnie, a three-headed snake ring, the closest thing there is to a wedding ring between Bonnie and Clyde, I don’t know what that's worth," said Bobby Livingston, RR Auctions.

The relics were taken as souvenirs by law enforcement officers in the 1930s and put up for auction by their heirs.

"I'm amazed at the people that have a big interest in it when me and my children have no interest whatsoever,” explained Rhea Leen Linder, 83.

Linder’s given name is Bonnie Ray Parker. Born six months after the shootout, she was named after her infamous aunt. But ridicule from classmates and family humiliation led them to change her name to Rhea Leen when she was in the fifth grade, Linder explained.

Growing up, said Linder, her family did not talk about the crimes committed by Bonnie and Clyde.

"They've been romanticized throughout the years. They were definitely cold-blooded killers. They were criminals," explained historian Farris Rookstool, III.

"I understand why it happened and I understand how it could happen. That's one thing I'm thankful for because I've heard the stories my mom and dad said about the depression," he said. "Clyde hated poverty. He worked. Every employer he had said he was the ideal employee but it just wasn't enough money."

Neither Mrs. Linder nor Mr. Barrow have any emotional attachment to the items up for auction.

The auction, based in Boston, begins June 22.