As rental scooters begin to share the streets with bikes, cars, and buses in Dallas—one California attorney already handling over a dozen cases involving the two-wheeled transportation says to get ready for accidents to start piling up. 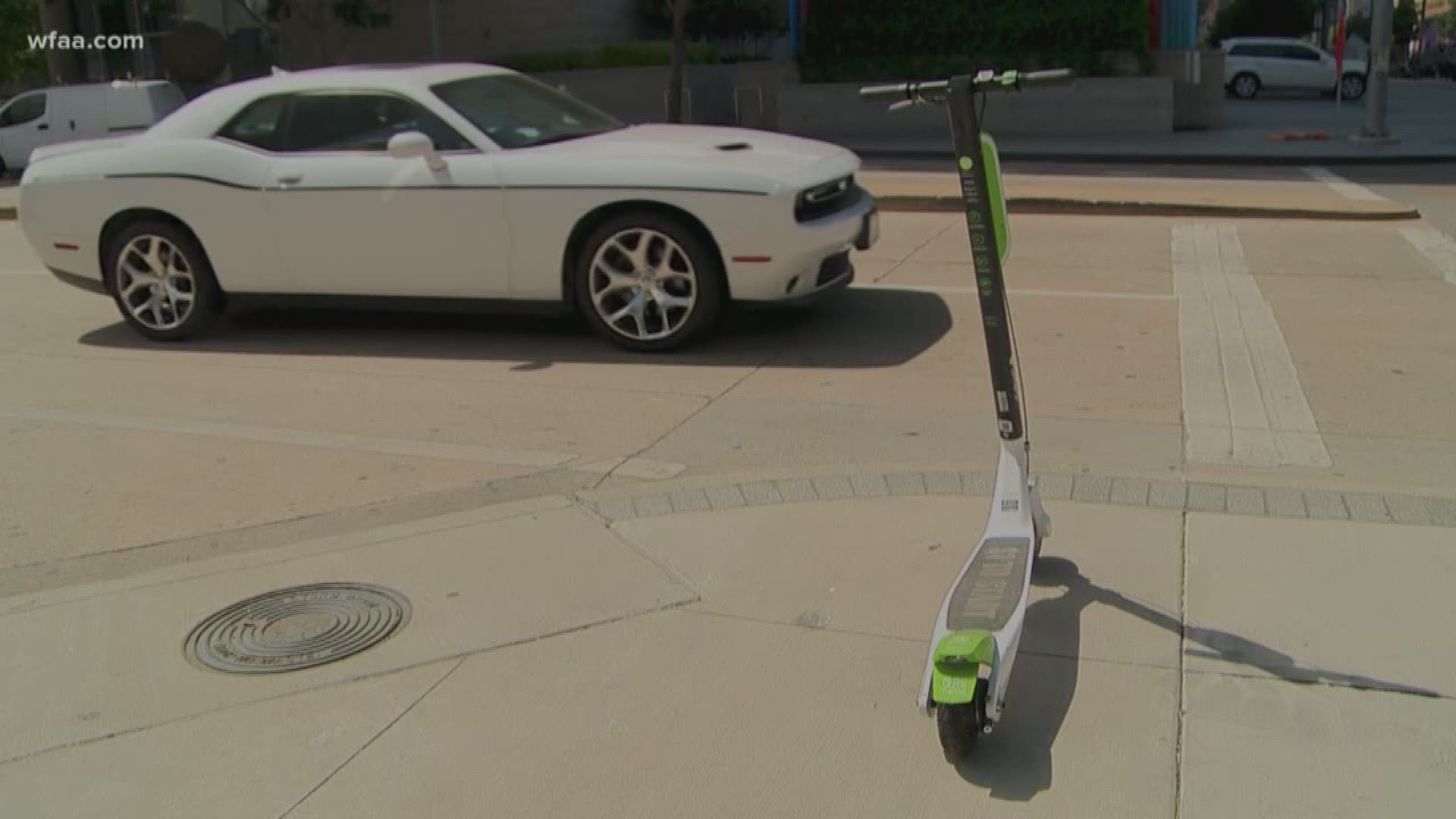 DALLAS — As rental scooters begin to share the streets with bikes, cars, and buses in Dallas—one California attorney already handling over a dozen cases involving the two-wheeled transportation says to get ready for accidents to start piling up.

At the end of last month, council members from the City of Dallas passed regulations for bike share companies that many in the city have been clamoring for.

They also gave the green light to a six-month trial run for electric rental scooters—which can travel up to 15 mph after the rider pays a fee.

Companies like LimeBike and Bird both dumped hundreds of scooters almost immediately after everything went through.

They must meet permit requirements, and if complaints are made to 311 about scooter litter in right of ways—they must collect them.

Council members plan to reevaluate the scooters after the six-month run is over.

The scooters have already arrived in many cities across the U.S., and have been met with both warm and critical welcomes.

But videos are already starting to pop up on YouTube of riders getting into accidents. In Santa Monica, a city bus nearly ran over a rider when he crashed and rolled into the bus’s lane. Footage from the bus’s surveillance system captured the heart-stopping incident.

Saghian added that he gets 2 to 5 calls per day from people who involved in accidents and want to lawyer up. “As time goes by, we’re getting more and more,” Saghian said.

Most of the time, he says people report to him that their scooter malfunctioned. “People say it accelerated and it didn’t stop—so they crashed,” he said. “I also get people that call me and tell me that the brakes didn’t work.”

Saghian said he can’t take those kinds of cases because they involve product defects. However, he is representing many riders who were involved in accidents with cars.

“People call us and tell us they were crossing an intersection, and someone hit them,” Saghian said. “Or they get hit at a stop sign. Or someone is at a red light not paying attention and they get hit.”

According to Saghian, figuring out who’s liable and who pays up is an insurance nightmare. He adds that it’s new territory for attorneys and insurance companies, much like Uber and Lyft were.

Bird and LimeBike are required to have at least $500,000 per accident in liability coverage in the City of Dallas—but Saghian said they’ll only be held liable when someone can prove the cause of an accident was due to scooter malfunction.

When it comes to all other accidents? From his perspective, he said everything is on the rider, or driver who may have hit them.

And even in some cases, he says insurance companies will pull stunts on riders hit by cars.

“They try to argue that the scooter was going 10 to 15 miles per hour—and jumped in front of them and they didn’t see them,” Saghian said. “So, the speed is what kind of changes the liability dynamics.”

Saghian added that he's handling several cases where riders injured themselves after crossing over poorly maintained streets or sidewalks.

Riders in Dallas won't be able to sue the city or county when it comes to situations like that thanks to sovereign immunity.

However, a rider that gets into an accident near a construction zone with insufficient signage or warning could sue the contractor behind the job.

A PROBLEM FOR BIG D?

Dallas personal injury attorney Jeff Rasansky told Channel 8 that it’s only a matter of time before riders start calling his office. “I think we’re going to see a host of issues that no one has even thought about,” Rasansky said. “Who’s going to cover what type of accidents, etc.”

In cases where riders get into an accident with a car and they’re not at fault, Rasansky said things are pretty simple because the driver’s insurance (if they have any) should take care of things.

But if a rider causes an accident or is hurt by their own negligence? He says they may not have any coverage at all.

“Car insurance will not cover you on a scooter if you’re at fault,” Rasansky said.

He said it's likely homeowners or renters insurance could, however.

The LA Times recently wrote about a woman who broke her arm on a rental scooter—and fell off because she was avoiding an accident.

In that article, the Times reported that her health insurance and car insurance pointed fingers about who would cover what.

Not to mention, even though Bird and Lime Bike encourage helmets-- there are no laws in Dallas requiring them for electric scooters. The only helmet ordinance in place is for cycling, and it only impacts minors.

The good news, as Council Member Phil Kingston told WFAA, the city will revisit the scooters by the end of the year. If there are issues, he said they will be addressed before moving any further.

However, as a rider, it’s good to know any consequences before hopping on.