'I'm not dead': Inside the struggle of finding work after 50

We set out to identify who is helping older people who are unemployed. And we are trying to offer some help of our own. 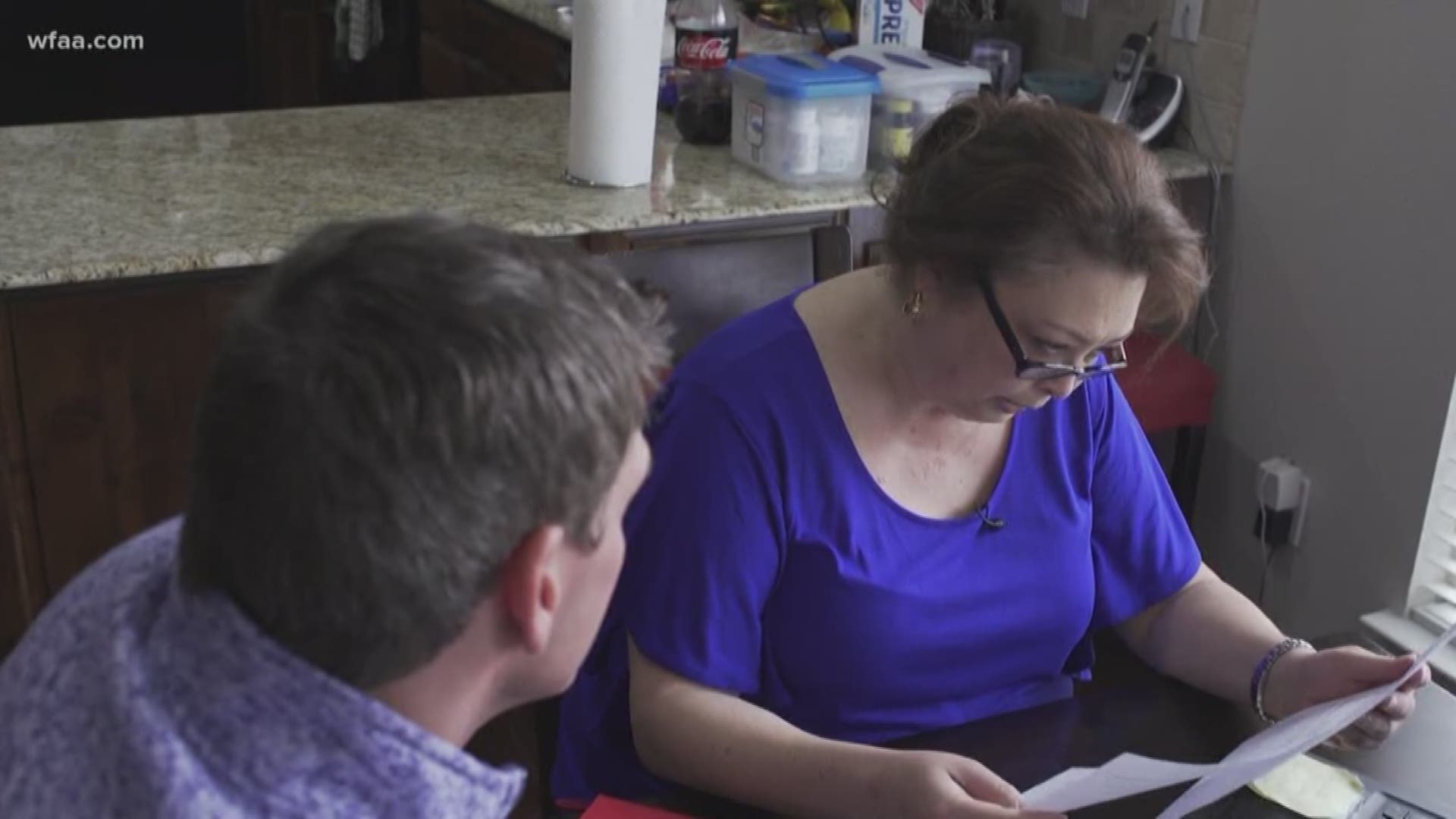 DALLAS — The good news first: Diana Hinton’s dog Maxwell has been on a lot of walks lately. The bad news: She’s had time for that.

Hinton's employer of almost three decades downsized, and she had to take early retirement long before she was ready.

A recent data analysis by Pro Publica and the Urban Institute found that early retirements are often not as voluntary as they sound. The analysis also found that shockingly high percentages of workers over 50 are forced out of their jobs before they can reach retirement age.

On one of those frequent walks with Maxwell, Diana Hinton told us she and her dog thought their outings would be for a limited time only.

“I think the first few weeks he was looking at me like aren’t you going somewhere?" Hinton said.

When we talked to her in September 2018, Diana was busy going about her usual routine of filling out applications online and sending out resumes. Often, she found herself paining over that dreaded question on the application form.

“Here we go…'when did you graduate high school?' Which I hate because I know they start adding in their heads – she’s gotta be in her 50s," Hinton said.

RELATED: MAP: Finding a job after 50

She was 53 at the time. When we talked to her, we had just begun a series of reports on the middle class called "Stuck in the Middle." On social media, we heard from so many people in the 50-plus age group talking about the difficulty of finding employment. A sampling of the messages:

“…No jobs for older people.”

“Jobs for seniors 60+ who still want to work are not so plentiful in the rural communities.”

“Age discrimination is alive and well in the job market.”

“No one hires old people.”

Many respondents also bolstered another of the findings made by Pro Publica and the Urban Institute, that being derailed so close to retirement age is devastating to retirement plans. A sampling of the messages about how long people will have to work:

“Looks like I'm working full time until dead, and leaving nothing behind.”

“We don’t even talk about retirement age anymore," said Claire Turner, deputy director of the Elder Financial Safety Center at The Senior Source. 'People are wanting to work as long as they can. So they get the question in the interview where do you see yourself in five years? I see myself working."

The Senior Source specifically helps people 50 and over to search for jobs. They offer free resume workshops, conduct mock job interviews, and teach software and social media classes, among other things.

Each year, the center helps as many as 2,000 older workers, and Turner said, unequivocally, “There is age discrimination. It is true. The average duration of unemployment nationwide is 22.7 weeks, but for older adults, it is 32 weeks.”

“I think seniors bring a lot to the table," said 64-year-old Michael Dade, who took classes at The Senior Source after he had to take early retirement from an accounting job at an oil company that downsized. “I felt like I had to be twice as good as some young person."

Dade cautioned others in his age group who still have jobs to stay hungry.

“I have seen people who basically put it in cruise control at (age) 55," Dade said. "No one has paid enough dues to have a guaranteed job now. Any day you go to work you have to think it could be your last day and plan that way.”

Dade now drives the van and coordinates volunteers at The Senior Source. He advised younger people to pay attention to the plight of older workers who lose, or are forced out of, their jobs. He warned those younger workers that they, too, will be older workers someday. He also said the older worker being forced out of a job could be their parents.

Dade suggested that younger people reduce their debt load, save as much as they can, maximize contributions to their retirement plans, and learn as many marketable skills as possible. That’s something he took advantage of in his former job.

“I tried to make myself learn as much as I could," Dade said.

Hinton also told us she took every training her former company offered, and she advises others to do the same, because it beats paying for those classes on your own someday.

Pro Tip: Claire Turner said it’s not enough to simply acquire knowledge and skills – you have to be able to communicate those assets to potential employers, while still sounding humble. For instance, if you have always been a dependable worker, you would say something like, "Past employers say my attendance is perfect…you want to say people ‘say’ I am good at this. That’s always a great way to deliver that message," Turner said.

A bright spot: Turner said she is seeing evidence that the tight job market created by a low unemployment rate is helping older workers who are unemployed.

“Employers are very open to older workers that they may not have been before," Turner said.

We checked back with Hinton four months after our first visit. She has seen no sign of that new openness to older workers. Hinton’s situation had become more desperate.

A few temporary gigs had come and gone, but she had yet to land a permanent job, despite decades of customer service experience, much of it in management.

The lack of employment was impacting most aspects of her life:

Housing: “Of course, the house, we don’t want to lose it. It may get to that point – not maybe soon – but maybe in the next six (months) to a year.”

Health:  “I have medication I can’t afford so I don’t take it.”

Retirement funds (which have depleted some):  “I don’t even want to check my Fidelity account.”

We asked her how many jobs she has applied for since she lost permanent employment two years ago.

That lines up with a 2017 study done by the Federal Reserve Bank of San Francisco, in which researchers sent out tens of thousands of fictitious applications from different aged artificial applicants who had similar backgrounds. They found that younger workers were significantly more likely to get a call back from prospective employers than older workers were.

“I’m articulate," she said. "I have an energy. I’m not dead. Whatever the curse is...whatever it is it needs to go away."

Worried that her expansive resume might make her look overqualified (and over age), she shortened it from four pages to two.

Pro Tip: Claire Turner at The Senior Source said, “When I was looking, I had 25 resumes. Every single word was true, but I had three different careers. We see all the time people walk in with a resume that is very impressive, with all these years of experience. They present that for a customer service position and there is no correlation. The employer doesn’t even understand why you applied. So it is a matter of tailoring your resume. It is definitely honest and factual; it is just showing things that are relevant. The industry standard is that people only show the last ten years.”

As we wrapped up our second visit with Hinton, she was still filling out applications. But she had also just received another rejection email.

“It says, 'Dear Diana, thanks for your interest in our customer service position. Unfortunately you have not been selected to continue in our process for this position.'"

Her dog, Maxwell, rests at her feet.

Hinton wonders if she will ever leave him again to go back to work.

“I am pretty strong, but I am almost sliding down, and I have to keep telling myself, 'Come on, Diana, you can do this.' I didn’t think it was going to be this hard.”

With the 50-plus crowd in mind, we asked people and employers to give us some real leads – and the result is this searchable map of jobs.

Click here to see the map or to add an open job to the map.