The stock has gone up nearly 1000% in a week, and other stocks have seen sudden huge price spikes. 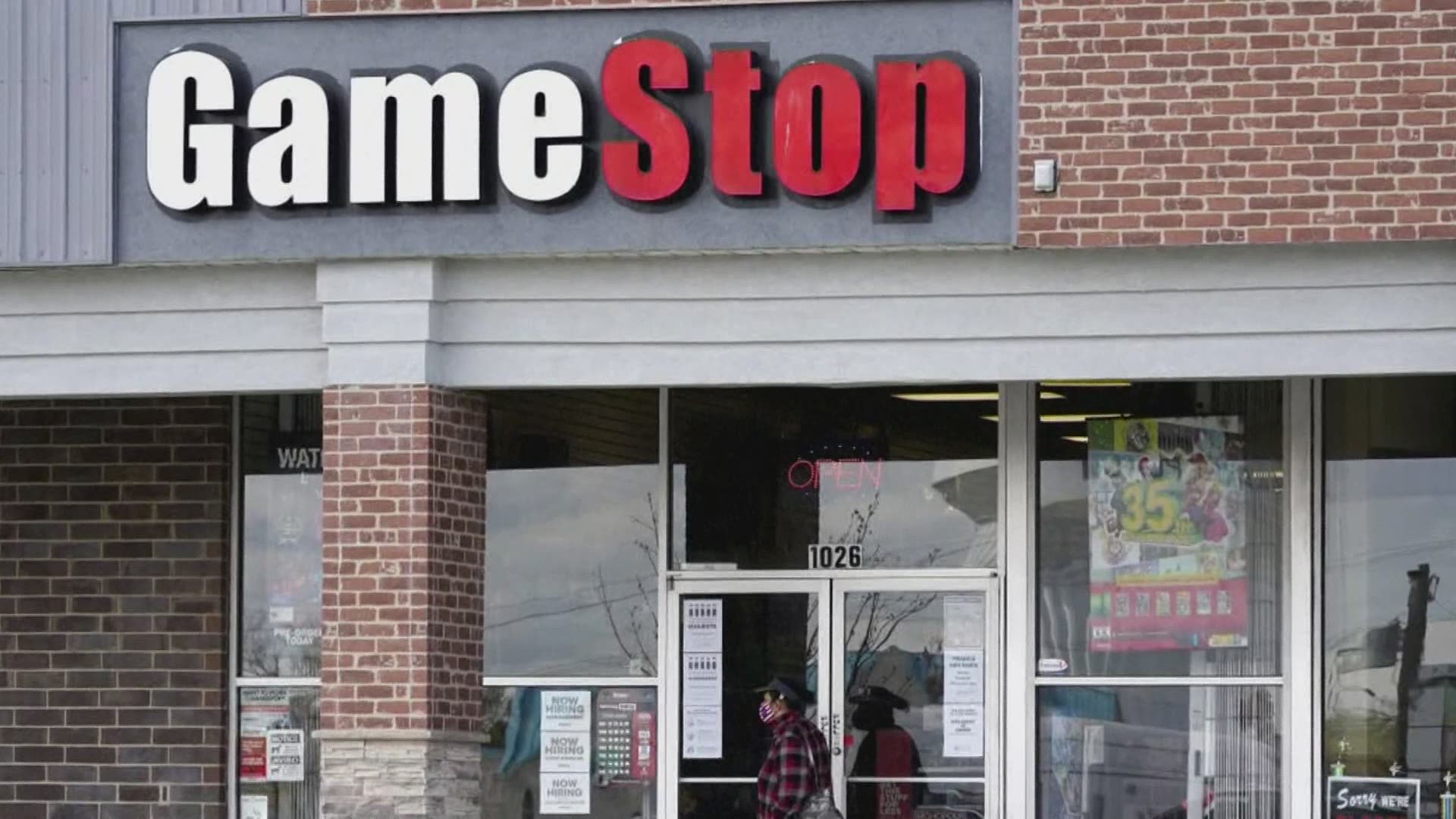 FORT WORTH, Texas — Stock of Grapevine-based GameStop has soared more than 1,500% in the past Monday and 785% in the past week. Its rocket ship rise has taken over social media sites and national headlines.

McGowan has run the company for 35 years and said what’s happening with GameStop hasn’t been seen to this level in decades.

“It is a bet on a future that is nearly impossible for many of the companies,” he said.

“Then, at some point in time, you have to buy [the shares] back, and hopefully buy them back cheaper, and you make money on the process,” said Shelly.

With GameStop, there were more shares shorted or borrowed by hedge funds than actually existed to be bought.

The stock became a favorite of the r/WallStreetBets subreddit on social media site Reddit, which found out about the shorts.

When well-known investor Ryan Cohen, former founder of Chewy, joined the company’s board after criticizing its delayed transition to the future of streaming gaming, the subreddit’s visitors started buying heavily and pushing up the price.

Hedge funds scrambled to buy shares, too, to get out of their big short bets. Options buyers also had to buy to cover other trades placed.

To buy, though, someone has to sell.

“It's very hard to move quickly when you have a big short position, especially when the stock is moving this much,” said Shelly.

This led to what’s called a short squeeze, and the hedge fund investors with short positions lost big money.

“The hedge funds are going to report one of their worst, their worst quarter in history,” said McGowan.

One fund, Melvin Capital, became a target of the Reddit page for standing by a strong opinion the stock was grossly overvalued. CNBC reported Wednesday the company was able to get bailed out by other fund and close its position.

“More people are getting squeezed here. They just can't take the pain and they buy the stock and close out their positions,” Shelly said. “This is basically a supply-demand imbalance.”

Redditors saw the stock as a way to both make money and punish hedge fund managers.

“This is hilarious because they hate hedge funds,” McGowan said. “They’re just celebrating ripping the faces off hedge fund billionaires.”

“That’s not because GameStop is going to take over the known universe of gaming,” said McGowan.

“[New investors] don't know much about their financial situation, they just know their buddy bought it yesterday and made 100%,” Shelly said. “It's very 'you don't want to see your friends getting rich and you're not.'"

Small-time and first-time investors on Reddit are buying mostly though places like the RobinHood app and are using the same strategy to push up Blockbuster, up 3,990% in a week, Express, up 716% in a week, AMC, up 581% in a week, and Koss Corporation, up 1,566% in a week, along with Tootsie Roll, Bed, Bath and Beyond and others, now called "meme stocks."

“It's like, ‘OK, if this works with GameStop, let's just find a list of other heavily shorted stocks and do the same thing,'" said Shelly.

Some hedge funds likely hopped on for the ride, though. Many use what’s known as quantitative algorithmic trading, meaning the process is automated, allowing them to quickly catch any big waves.

“That's exactly what they do. They look at the momentum, and they look at the order size and the amount of activity and absolutely they ride that momentum,” Shelly said. “They're professionals, and they're experts at this business, and to think, long term, you're probably going to do better than they are is kind of a fool’s game.”

The companies were failing for more reasons than popularity, though. The gains won’t last, and some newbies will lose big. McGowan and Shelly both compare it to the dot-com bubble.

There has been talked the movements will require intervention from federal officials.

“We are aware of and actively monitoring the on-going market volatility in the options and equities markets and, consistent with our mission to protect investors and maintain fair, orderly, and efficient markets, we are working with our fellow regulators to assess the situation and review the activities of regulated entities, financial intermediaries, and other market participants.”

Shelly sees both sides of the argument for change.

“Let's not let people do something stupid that really harms them versus the Libertarian side that says, 'Look, it's my money. What do you care?'” he said.

McGowan sees people now trending to stocks they can hold, not constantly buy and sell.

“It’s the beginning of the realization that valuations are absolutely crazy,” he said. "'What do I get paid in cash flow?' That’s going to be the outcome when this thing actually starts to unwind.”

Both are glad there’s at least more interest in investing now, but say it’s important to be careful.

“Don't invest money you can't afford to lose,” Shelly said. “There's the old Warren Buffett saying, be fearful when others are greedy and be greedy when others are fearful, and that's it. It's a great statement, but it's hard to do.”

“If you want to actually devote the time to being a great trader then do it,” said McGowan.