Snow Day for Layla: Parent's plea for you to help the next terminally ill child

Despite every drug, and all their optimism, the cancer wasn't going away. 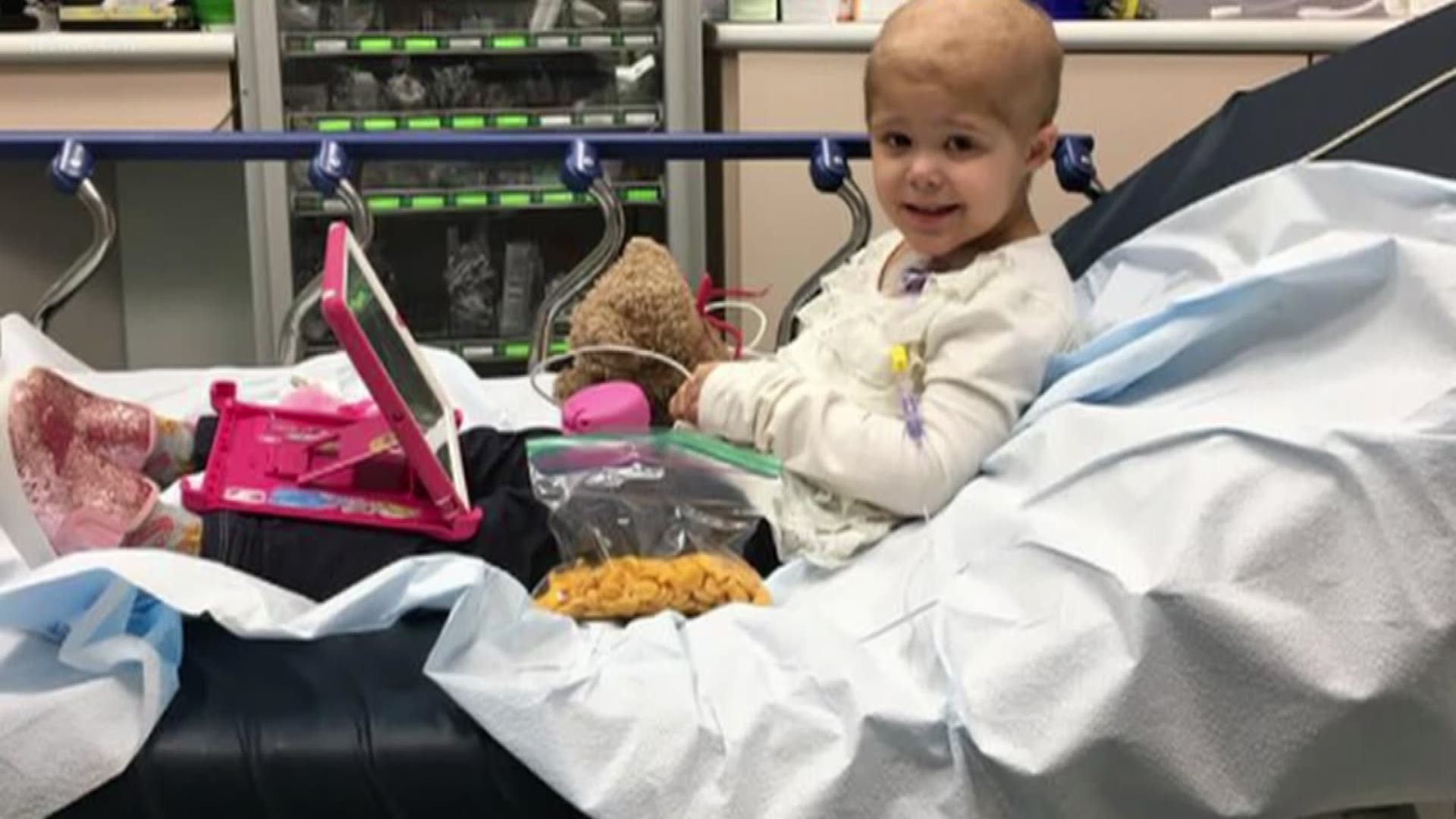 It snowed Thursday morning in Carrollton -- just for one little girl.

It was a gift that arrived just in time while her family wishes the miracle they seek could reach little Layla too.

Layla Stamp was a perfect 4-year-old girl when the trouble began.

“She had complained just on and off of a headache,” her mom Sara Stamp told WFAA.

A CT scan proved it was much more. A golf-ball-sized tumor required immediate surgery. The biopsy showed that it was Medulloblastoma, the worst possible news.

"It still hadn't sunk in at that point that it was cancer, that it was brain cancer,” Stamp said.

The next months would bring surgery, chemotherapy, and radiation -- and as much hope as her parents could muster. Doctors couldn't slow down the disease.

"He came in and he said, 'I'm really, really sorry, but there's a new tumor,'” Stamp said.

Despite every drug and all their optimism, the cancer wasn't going away.

"That's the point when he said 'if there are things you want to do as a family, you need to go do them,'” she said.

"He started to really try to put us in the right mindset for what is to come,” Layla’s dad Bryan Stamp said.

"There are not many options,” Sara added. “There are no good options basically."

They moved up a planned trip to Disney World to September, a trip Layla was still able to enjoy.

Then, as recently as two weeks ago, Layla, now 5, began to fade. Suddenly she could no longer walk, no longer feed herself, no longer play with the little brother she loved.

"The harsh reality is it's this tumor, this disease, that's just taking over her brain,” Bryan Stamp said.

"And it's just, I mean it's hard as a parent to watch that,” Sarah Stamp said. “And to know that she knows."

"She knows something's wrong, finally,” Bryan Stamp said of his daughter, who would always defiantly proclaim to anyone who asked that no, she wasn’t sick.

"Her body is just failing her. And it's really hard to watch,” he said.

So if doctors can't cure her, what could anyone possibly do for Layla?

Donnell Toler could at least tell them they were not alone. The same disease took her son Cole in 2010.

"My son's illness was pretty quick,” she said.

Years after his death, his name and the phrase “LiveStrongCole” is on every bag of ice at Donnell Toler’s company Emergency Ice. The Dallas area ice provider also offers a team of employees and a snow blowing machine to offer snow days for terminally ill children like Layla.

"It's something Cole would have done,” Toler said. “He would have wanted them to have that moment, that magical moment of just being a kid again and kind of forgetting about the circumstances for a little while."

"I hope that these little memories make a difference for her. They're more for us I think sometimes. You just want to give them anything,” Bryan Stamp said.

These parents, who've grasped at every memory and every straw, navigated the aggravation that an arsenal of drugs does not exist in the pediatric form of this disease. They had one final straw -- a trial drug used for other cancers was denied by Blue Cross because there's no proof it would work for Layla and might actually harm her. They are now asking for help for the next little boy or girl.

In her current fragile state, the Stamps decided not to pursue purchasing the trial drug on their own because doctors advised them it could make her neutropenic, unable to fight off infections, and would likely land Layla back in the hospital for her last days.

"There are so few drugs for what Layla has, or for what really any of these kids have. Because, and flat out, there's no profit in this. There's none,” Bryan Stamp said. "I get it. But at some point in time, it's gotta change. There needs to be more money, more research.”

Layla's parents admit that time may be short for Layla. As they cherished the memory of the snowfall she’d always asked for, they ask the rest of us to consider a lasting gift too: a willingness to fight for the next child.

To learn more about Medulloblastoma and how you can help spur more research and help other families in the same difficult fight, visit the LaylaStrong Foundation website.

Update: According to the LaylaStrong Facebook page ran by her parents, Layla passed away Saturday evening.

"We are heartbroken to be without her smile and spunky spirit, but we rejoice in her new body and home," the post reads.