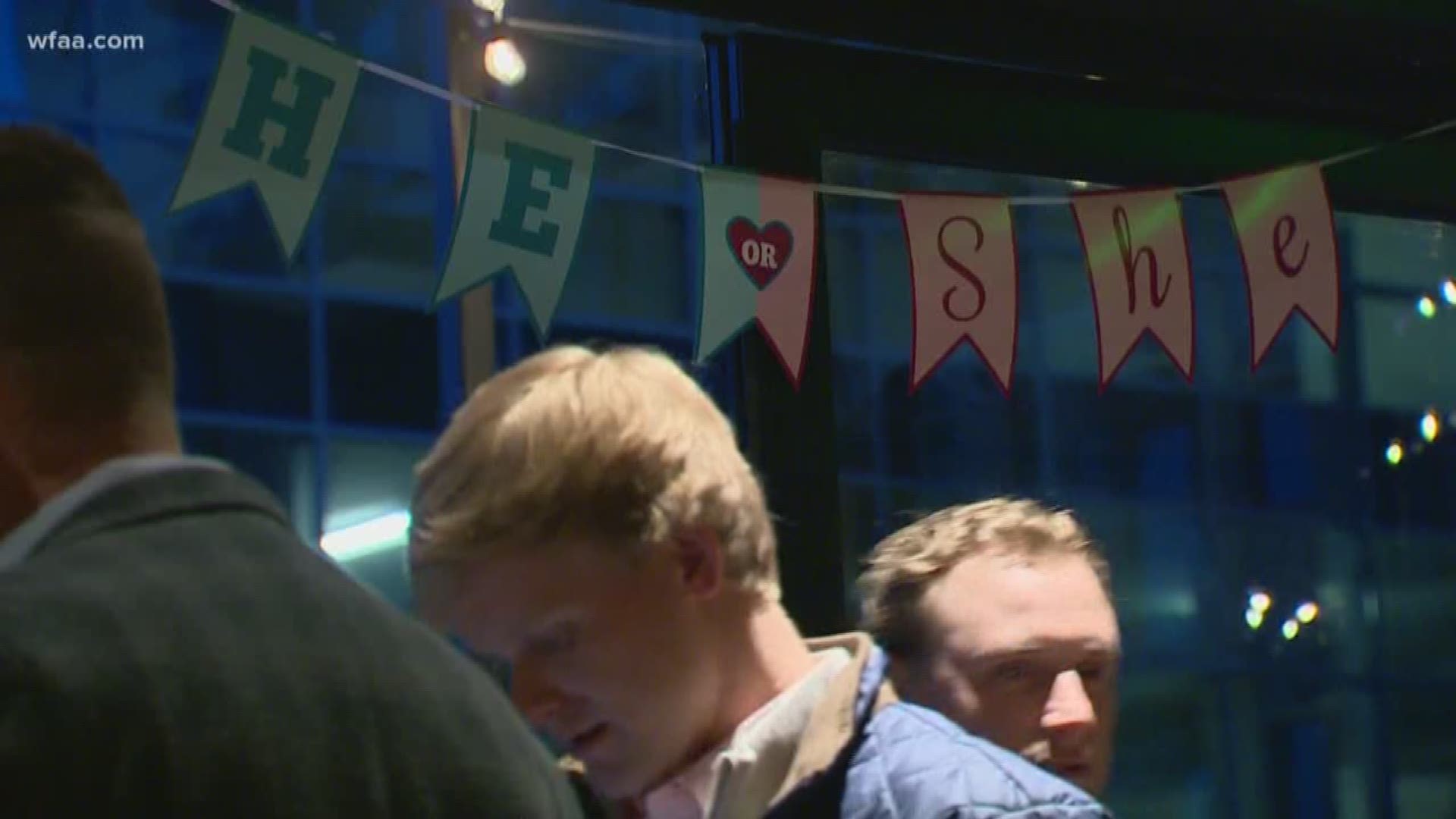 It's a stunt every future parent is expected to pull off these days.

And hey, I probably don't have to explain how elaborate they've become. No doubt you've seen many on social media.

Some land on the simpler side of things. Popping a balloon with confetti that's blue or pink, releasing blue or pink balloons out of a box, or cutting a cake with blue or pink filling.

Others, well they can be more extreme. Hitting a baseball that explodes with blue or pink powder, shooting off fireworks. I mean, there's even a couple in Louisiana who used an alligator to reveal their child's gender...just Google it.

But Gini and Lendle Rounsaville definitely have everyone beat.

On Friday night, they likely pulled off the most visible gender reveal Dallas has ever seen.

Gin and Lendle got married last year and found out they were expecting in December.

"I took a pregnancy test, and then I took three more just to be sure I was pregnant," Gini Rounsaville said with a laugh. "Lendle said, 'I can't believe Christmas is over,' and I said, 'Well, what about one more Christmas present?'"

"I was overjoyed," Lendle Rounsaville said. "We just wanted to try and live life together you know. We're both in our thirties and this is what we wanted."

Finding out you're expecting is a joyous moment for any couple, but it's quickly met with speculation and one question...boy or girl?

"His first question was, 'What's your gut feeling?' And I said I haven't even gotten there yet," Gini said.

Yet, the couple had some theories. Gini is one of three, and her two siblings are boys. Lendle said his family often sees more boys than girls, too.

"I definitely think it's going to be a boy," Lendle said.

"At first everyone was telling me it would be a girl, and the closer I get, I'm feeling boy more," Gini said. "My older brother has three boys. I mean, I feel like it's a boy."

Well, all guessing stopped Friday night. You see, Gini works for Peloton, the real estate company that manages and helps lease space at the Bank of America Plaza building.

She convinced Peloton to let her use the building's iconic lights, usually set to green, to reveal the gender of her child.

Those lights, by the way, can be changed to a number of colors. So after a close friend told Peloton the gender of Gini's baby, a date was set.

At 6:45 p.m. Friday, the building would turn either blue or pink.

Around dark, the building turned to a neutral white while Gini and Lendle gathered with family and friends on a balcony at The Henry nearby.

All eyes were fixed on the building as the clock hit 6:44 p.m. And then, three little words were shouted into the Dallas air.

"It's a boy!" everyone yelled.

Yup, the building turned blue. Gini and Lendle's premonitions about having a boy were right.

"Being able to change the lights and share it all with Dallas and our closes family and friends was so special," Gini said.

"Maybe it will become a thing, maybe you'll see the building be blue or pink at night and you'll go alright someone is having a boy or girl," Lendle said with a laugh.

Yeah, it's hard to beat this gender reveal. But at the end of the day, as all gender reveals are, it's only a stunt.

This loving couple is moving one step closer to parenthood.

Congrats to the both of you.