Jerry LeVias broke the color barrier at SMU. Now, a football player is selected every season to wear his number. 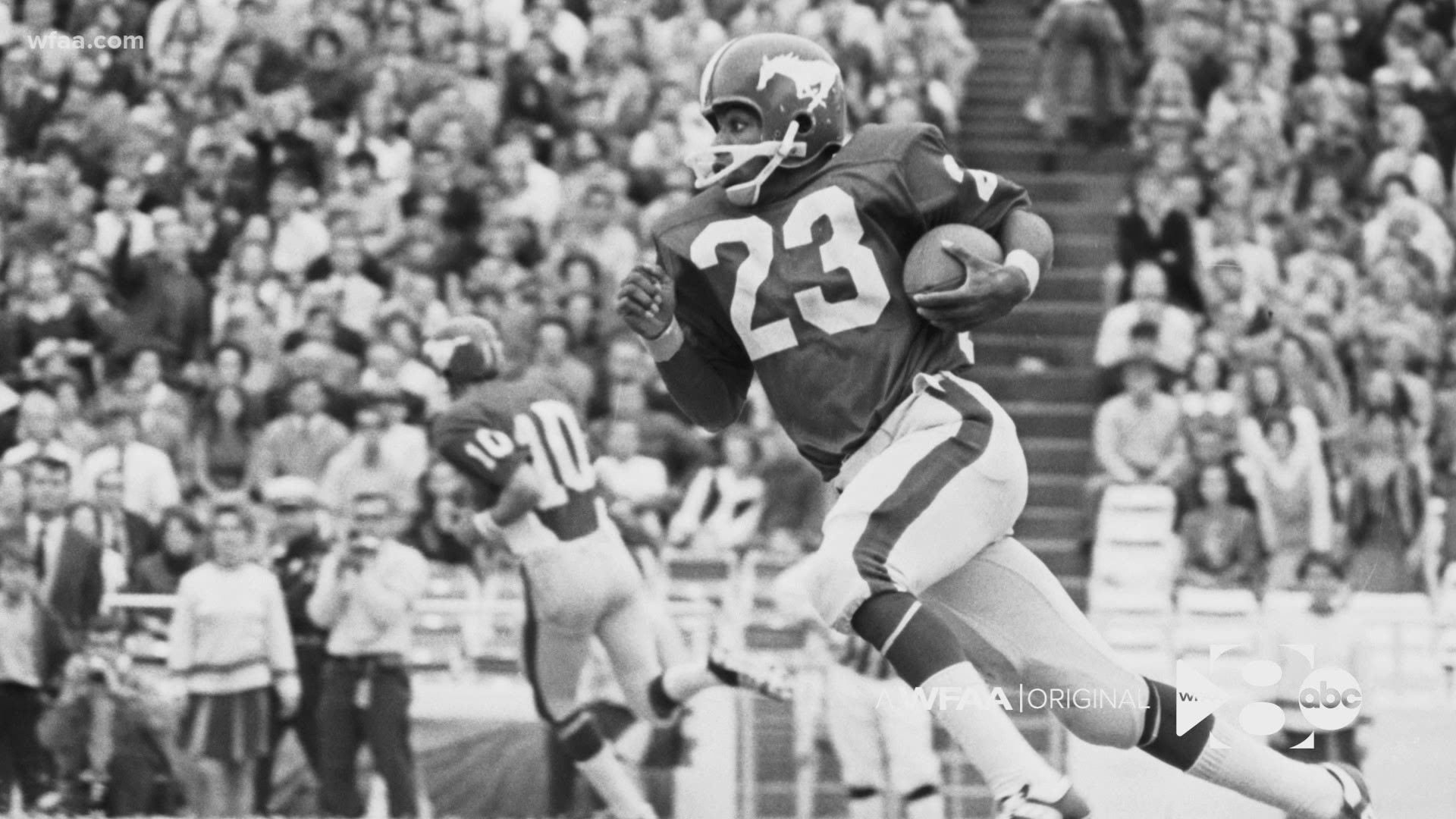 DALLAS — Decades after Jerry LeVias broke the color barrier in the Southwest Conference, the fight for race equality continues in the U.S.

“Who would have thought, 50, 55 years later, we’ll still be talking about racial unrest and protesting,” said LeVias.

In 1965, LeVias became the first Black scholarship football player at Southern Methodist University and in the conference.

“I don’t agree with all the burning and looting but I think it is about time that we do have equality in this country,” he said. “And especially in the Black Lives Matter Movement, let’s not get lost on what we’re there for, peaceful protesting for equality.”

Fifty-five years earlier, another group of peaceful protesters gathered in Selma, Alabama. On March 7, 1965, their confrontation with authorities on Edmund Pettus Bridge came to be known as “Bloody Sunday.”

It was just one of the indelible reminders of the civil rights movement in a country that defined a man’s value by the color of his skin.

Fight for equality on the football field

The civil rights movement was a decade-long struggle to end legalized racial discrimination and segregation against Blacks in the U.S.

The boundaries of America’s discrimination didn’t stop at the borders of the South, and included racial segregation in collegiate sports.

In 1965, SMU was one of eight schools in the Southwest Conference. None of them had a single Black player on their team’s roster.

But SMU head football coach Hayden Fry had a different agenda. He recruited and signed the first Black football scholarship athlete in the conference: Jerry LeVias.

LeVias, who was considered by many the Jackie Robinson of the southwest, described his years at SMU as “a living hell.”

“It was a nightmare. You weren’t treated right, you weren’t treated equally, you were lonesome,” said LeVias. “Being spit on, you were called the N-word, an African, a monkey. The times when people would call me a n*****, I would look at them, smile and say, the best one you’ve ever seen.”

Even though decades have passed, LeVias’ memories remain, including that of his worst injury on the football field.

“I then I was on the ground and just about to get up and one of the players jumped in my back with his knee, wedged two vertebrae and cracked a rib,” he described.

Chuck Hixson, who was the 1968 SMU quarterback, described how LeVias was treated on the field.

“I remember him being punched but it wasn’t in the eyes, it was a lower mid-section area,” said Hixson.

Despite the odds, in 1966, LeVias led the Mustangs to their first conference title in 18 years.

“I only touched the football my sophomore year 66 times,” said LeVias, “and not necessarily led the conference in receiving but in scoring and everything else.”

Hixson said LeVias was known for his hands.

“I used to joke around and call him, ‘Old Flypaper Hands,’ cause anytime it would get near or by, he was going to latch onto it…once it hit his hands it was caught,” said Hixson.

A coach, a grandmother, and a lot of faith

The legendary coach died in December of 2019.

“Levi, he called me when he loved me. When I was in trouble, he called me Jerry, but I knew him as a coach and a father figure,” said LeVias. “Coach Fry was a great man and he was one of God’s greatest gifts to a lot of us. May he rest in peace and God bless him and I’ll love him forever.”

“He had a long talk with my grandmother, and she said that, ‘I want my grandson to be like David fighting Goliath,’ and it came from Psalms 23 in the Bible,” said LeVias.

His grandmother also demanded one small thing of Coach Fry.

“Before every game, Coach Fry made sure that I talked to my grandmother and she gave us a prayer,” LeVias said.

Before one game, LeVias and Fry found themselves under the stadium bleachers, in a phone booth, with no money. Thankfully a band member at the concession stand was able to help them out.

“He said, ‘You don’t need that popcorn, let me have the money,’” said LeVias of Fry. “So he put the money in the phone booth, we called my grandmother.”

Much like his grandma, LeVias relied on his faith to get through most days at SMU. On the back of his dorm room door he posted and recited daily the Serenity Prayer.

Twenty-seven words that he would memorize and rely on.

“God grant me the serenity to accept the things that I cannot change, the courage to change those that I can and the wisdom to know the difference,” LeVias said.

He relied on those words especially in the most troubling of times, as was the case against crosstown rival TCU.

The one game that he admits he lost total control of his emotions, after having his helmet ripped away, being spat on and held to the ground.

“If I had a gun, really I would have shot somebody,” said LeVias. “I lost it, and I dared anybody to touch me.”

And in true LeVias style, he channeled his emotions into his next touch of the ball, a touchdown, but unlike any other.

“That was one of the worst touchdowns that I have ever run in my entire life, because I did it out of hate. Hate does not hurt the other person as much as it hurts you,” LeVias said.

Finding support off the field at SMU

Despite the opposition, LeVias proved he didn’t need everyone behind him, he just needed the right people behind him.

“Many in the Black community did very much appreciate what Jerry was doing here at SMU,” said Rufus Cormier, an SMU offensive lineman in 1966.

LeVias said his friends were the maids at SMU, who cleaned up the rooms and emptied the garbage.

“I had a chance to shake his hand. He said, ‘I’ve heard great things about you’ but he said, ‘I want to tell you, always keep your emotions in control,’” said LeVias.

There have been decades of changes to football since LeVias met with King at SMU but there is one thing that remains the same.

“Every year a coach here chooses a player to wear Jerry LeVias’ #23 in honor of what he stood for and the hardships that he had to overcome while playing college football. I think every Black athlete should be very grateful that he didn’t give up the struggle,” said Rodney Clemmons, a safety who played for SMU in 2019.

It’s taken over a half-century, but LeVias has forgiven, but not forgotten the physical and emotional scars that will haunt him for his lifetime.

“I don’t have any animosity in my heart for them because as my grandmother use to say, ‘Bless them for they know not what they do,’” LeVias said.

The animosity and struggle only served to make LeVias stronger. Encouraged by one of his biggest supporters, by Fry, who was like a second father, an advisor, and a friend.

As people gather in the streets across the country in 2020, following a number of high-profile cases of Black people dying following interactions with police, LeVias wants things to get better.

“I think the thing that needs to be done is everybody just try to get along and love each other because it is about time protesting would end,” said LeVias.

He said there’s one change that would put an end to it all.

“Just treat everybody fair. I think this is the thing we will be looking for in the days ahead,” he said.

As far as his own legacy, LeVias has one goal.

“When they get a chance to look at my tombstone it’s going to be the date of my birth and date of that I passed away, and there is going to be a dash that says, I made a difference,” LeVias said.