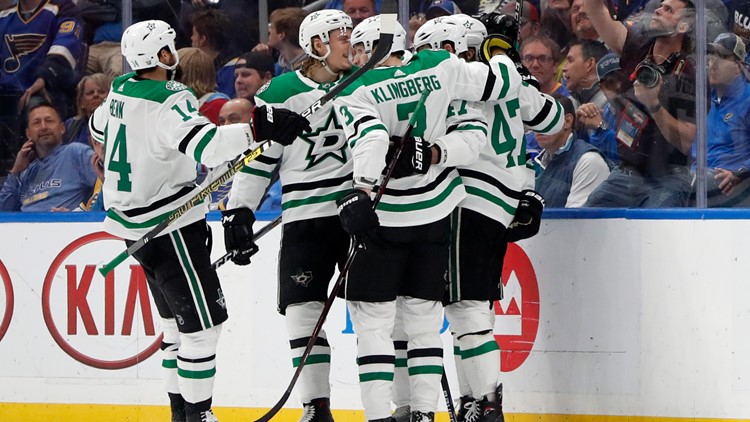 Photo by: AP
Dallas Stars players Jamie Benn (14), John Klingberg (3), of Sweden, and Alexander Radulov (47), of Russia, celebrate after a goal by Esa Lindell against the St. Louis Blues during the second period in Game 5 of an NHL second-round hockey playoff series Friday, May 3, 2019, in St. Louis. (AP Photo/Jeff Roberson)

So, you're not really into celebrating the holidays quite yet. Or maybe you don't celebrate them at all. Or you're just a Grinch. Any which way, here are events happening this weekend:

1. Calling all music lovers-- TCU's Symphony Orchestra will perform in concert this Thursday at 7 p.m. The concert will be held at Ed Landreth Hall and Auditorium in Fort Worth and feature three faculty members from the School of Music for a performance of Beethoven's "Triple Concerto."

The event is free and open to anyone interested in attending. It will also be streamed live.

2. Performing Arts Fort Worth will be performing Broadway hit "Miss Saigon" all weekend long at Bass Performance Hall. Performances will either be at 7:30 or 1:30 p.m. depending on the day.

3. The Dallas Stars will take on the Winnipeg Jets at the American Airlines Center this Thursday at 7:30 p.m.

5. Jonathan Van Ness' Road to Beijing stand-up show will be at The Pavilion at the Toyota Music Factory in Irving on Friday night. Go see the "Queer Eye" star at 8 p.m. to hear all about his dreams of becoming a figure-skating prodigy before the 2022 in Olympics in Beijing-- and just how that's going for him.

6. Check out the Jo Bros make their return to the music industry as their Happiness Begins Tour makes it way to the American Airlines Center on Friday night.

7. Dallas Black Dance Theatre will perform "Black on Black" on Friday and Saturday night. The show will in the "intimate setting of the DBDT studio," with original works from the dancers. There will be both a holiday happy hour before the show and after-party immediately following the performance with a live DJ.

8.  Emily Bronte fans, get excited. "Wuthering Heights" will be brought to life at The Dallas Institute of Humanities and Culture on Friday as a part of the Institute's Classics at Cour Regard program. There will be guest speakers, actors, musicians and cuisine for guests.

Tickets cost $60 and the event starts at 6:30 p.m. For more information, click here.

9. Country musician Travis Tritt will be at Billy Bob's on Saturday night performing his classics for the crowd. Doors open at 6 p.m., live music starts at 8 p.m., and Tritt himself will hit the stage at 10:30 p.m.

Tickets to see the country star start at $18.

10. Head to the American Airlines Center to see the Mavs take on the New Orleans Pelicans on Saturday afternoon.

11. Ready for a night a fashion and philanthropy? Make your way to the Design District for CURLS on the Runway Charity Fashion Show, an event hosted by former Destiny's Child member LeToya Luckett and founder of Curls Mahisha Dellinger.

The event is focused on supporting successful black entrepreneurs, raising awareness on the issue of domestic violence and giving back to the community.

Tickets start at $50 for this event that starts at 7 p.m.

12. If motorcycle racing is your thing, you'll want to check this one out in Decatur. Red Bull Override will run from Saturday to Sunday at Rocky Ridge Ranch and feature a 6-hour hard enduro race, along with a number of other activities.

Those who want to be a part of the race will pay $85. There will also be a gate fee of $15 for those not participating in the race. To find out more about the event, click here.

13. Teach your kids about human rights at the Dallas Holocaust Museum this weekend with free and family-friendly activities focused on the topic.

The event runs from 2 to 3 p.m. and is included in the cost of general admission. For more information, click here.

14. The Latino Cultural Center is hosting its first-ever Tamal Festival on Saturday afternoon, and you're sure to be able to enjoy plenty of tamales at this event.

The free festival will focus on the importance of tamales in Latino culture and feature a number of local tamaleros with tasty treats for the taking.

A lecture, husk doll activity, and an interactive dance lesson are all part of the planned events at the festival, which runs from 12 to 3 p.m.

15. If basketball is not your thing, you can catch a hockey game instead this weekend at the American Airlines Center. The Stars will play the New York Islanders at 8 p.m.

16. Sad that college football season is almost over? Cheer up by watching the fight for the Dr. Pepper Big 12 Football Championship at AT&T Stadium in Arlington this Saturday.

Baylor pairs up against Oklahoma at 11 a.m., and tickets are selling for as low as $60 on SeatGeek.

17. Missed Saturday's Mavs game? Don't worry, you can still catch a game this weekend. The basketball team will play the Sacramento Kings at the American Airlines Center at 6 p.m.