As several bands of heavy rain pass through North Texas Friday and Saturday, flash flooding is a real danger across much of the area. We will maintain a blog providing the latest updates as we learn them.

11:30p Navarro County Office of Emergency Management says it has responded to 20 swift water calls as of 11:30 p.m. Friday.

10:30p An update on the latest Flood Warnings in North Texas:

10:00p Navarro County OEM says southbound Interstate 45 has reopened after flood water affected the area most of the day Friday.

9:55p Love Field tells News 8 that 20 total flights were cancelled Friday due to the weather. The airport operates roughly 180 flights per day. Travelers are encouraged to arrive early Saturday.

9:00p The nearly three inches of rain recorded by 9 p.m. at Dallas-Forth Worth International Airport set a new record, according to the National Weather Service of Fort Worth.

8:45p TxDOT announced detours around the flooding along I-45 in Corsicana. Extended delays were to be expected. The detours from TxDOT are as follows:

A total of 10,914 total outages were recorded in North Texas. An update just after 8 p.m. showed 419 active outages. The most widespread outages in North Texas were reported in Dallas, Kaufman and Tarrant counties:

5:38p The North Texas Municipal Water District has experienced an unauthorized discharge of domestic waste water from its South Mesquite Regional Wastewater Treatment facility, located at 3500 Lawson Road, Mesquite, Texas. At approximately 1:45 p.m. on Friday, Oct. 23, 2015, as a result of excessive rainfall inundating the collection system, an estimated volume in excess of 100,000 gallons of domestic wastewater was released into Mesquite Creek. NTMWD personnel moved quickly to respond and are onsite conducting environmental assessments, and working to correct the situation as quickly as possible. The discharge is highly diluted due to excessive rain water within the sanitary sewer system, and no environmental impacts are anticipated.

4:40p I-35 is impassable in West, just north of Waco in McLennan County, due to water across the roadway there. - WFAA 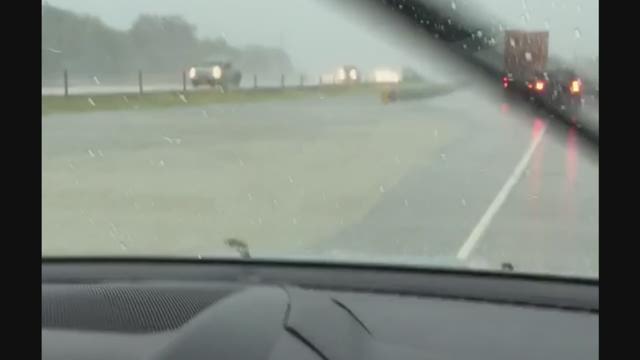 4:31p Another large rain shield with embedded heavy thunderstorms is moving northeast and will overspread all of North Texas tonight with an additional two to five inches of rain for the Metroplex, and an additional three to seven inches to the south and southeast.

Lesser amounts are expected to the north and northwest. Needless to say, a Flash Flood Watch continues through Sunday morning.

Hurricane Patricia will continue to move deeper into Mexico, and the remnants are expected to take a right hand turn over the mountains of Mexico, which should keep the core of this storm well south of North Texas, generally across south central and southeast Texas, where very heavy rains will also lead to flooding problems in those areas this weekend. So. after the heavy rains tonight and tomorrow morning, we should see just a few lingering showers through Sunday morning before finally drying out.

Note: The National Weather Service Doppler Radar was knocked out of commission for several hours, and thus the estimated rainfall totals from the radar is underestimating the totals since heavy rain was falling when it was offline. - Meteorologist Steve McCauley

The Texas Department of Public Safety is sending Highway Patrol Officers from surrounding Counties to Navarro County to assist in responding to flooding in the area.

The officers will initially be reporting to the Navarro County Courthouse @ 601 North 13th Street in Corsicana. - WFAA

Our operations center in Fort Worth continues to monitor the movement of the storm, and we will make adjustments to our schedule based on forecasts from our team of meteorologists. - American Airlines

3:43p James Colunga, with DPS in Corsicana, reports extensive flooding and closure of northbound I-45 from exits 228 to 231. DPS working on alternate routes for drivers. - David Goins, WFAA 3:15p High water has shut down northbound and southbound traffic around marker 225 in Corsicana. - WFAA.com

3:14p Governor Greg Abbott has announced an elevated activation of the Texas State Operations Center (SOC) as severe storms are expected to impact parts of Texas this weekend. Governor Abbott has also approved the use of state resources that have been staged for rapid deployment as needed to assist local officials during this significant weather event. Texans are also encouraged to prepare for severe weather in their area. - Office of Gov. Greg Abbott

12:57p Denton Guyer is taking on Byron Nelson in a football game that started at 11 a.m. Friday to avoid the evening downpour.

The game was originally scheduled for Thursday night, but they pushed the game to Friday afternoon.

The game started off with rain, but it quickly cleared up, and it looks like they'll have a break from the weather as they head into the second half.

Dozens of high schools in the area are scrambling to reschedule their games this weekend. Check the social media accounts of schools, school districts, and district athletic departments for updates. - Philip Townsend

12:32p At least another 36 hours of wet weather! These rain bands will come in waves. Looks like parts of North Texas will see a break right after lunch before another band of heavy rain moves in this afternoon and evening. In addition to the several inches of rain that's already fallen, another 3"-6" is possible through Saturday night. - Ashton Altieri

12:28p With more than 200 high school football teams in the area, we're having trouble keeping up with the numerous game start time changes due to weather. If you're wondering about a particular team or school, check the social media pages for the school districts and district athletic departments of the teams involved, or the school's pages for updates. We will try to get a full list as the day goes on. - WFAA Staff

11:58a Delays at D/FW Airport are between an hour and an hour-and-fifteen-minutes long and growing, the airport said on Twitter.

11:49a Friday's weather is forcing a lot of changes to high school football schedules around the area. A few updated kickoff times:

As of this time, all Dallas ISD football games are still scheduled as planned. Check the DISD Athletics Twitter account at this link for the latest updates. - WFAA Staff

11:39a Torrential rain continues moving east across North Texas. Rainfall rates are up to 2.5" per hour in some areas, and there is frequent lightning along the George Bush Turnpike corridor. This line is moving east at 25 mph, and after it passes, expect another break from the storms. - Ashton Altieri

11:02a A Flash Flood Warning has been issued for Dallas and Tarrant counties until 12:45 p.m. There is also a warning for Johnson County until 1:15 p.m. As heavy rain moves across the DFW area from both the west and the south, some areas will see rainfall rates of at least 1.5" per hour. Remember, never drive through a flooded roadway and stay off the roads altogether if you can until this band passes. - Ashton Altieri

10:57a The City of Dallas has closed six streets already due to potential flash flooding. Crews are monitoring those locations and others around the city for dangerous conditions. Barricades are in place at the following locations:

A Flash Flood Warning was put into effect in Dallas, Tarrant, and Johnson counties Friday morning after the first bout of rain in weeks hit the area. The National Weather Service also has most of North Texas under a Flash Flood Watch.

News 8 Meteorologist Ashton Altieri said commuters may have lucked out Friday morning as the rains in the area died down as traffic began to ramp up. However, more rain is expected throughout the day and as the ground becomes more saturated, flooding could become more prevalent.

"Two bands of very heavy rain are moving straight for North Texas," Altieri said. "As they merge, we're in for a lot more rain through noon [Friday]. 'Torrential' will describe the intensity of some of this rain, along with frequent lightning. This heavy rain is already impacting the west side of Fort Worth."

The National Weather Service predicts an additional three to six inches of rain for much of the area, with a few spots seeing as much as a foot of rain.

"Transportation officials should be prepared for the possibility of slow traffic due to heavy rain, especially in traditional low lying areas, as well as construction zones," a NWS release said. "Outdoor events through Saturday will likely be affected with periods of heavy rainfall and thunderstorms, including frequent lightning strikes."

Northbound Loop 12 and westbound Highway 114 were closed at the Highway 183 exit due to high water.

"Any area which flooded in May (not including lake runoff) may experience additional flash flooding this time around," the NWS release said. "[...] Main impacts are expected to be in the smaller tributaries to the main rivers. Flash flooding on small streams and urban areas(especially low lying and construction zones) remains high."

Delays and cancellations of events were already being reported Thursday, and nearly 20,000 Oncor customers were without power for a time overnight.

Dallas police reported accidents were up 50 percent overall on Thursday over Wednesday, and freeway accidents in particular were up 107 percent.

Three North Texas high school football games were postponed with the storm's arrival in the area.

Lightning forced the postponement of the game between Byron Nelson and Denton Guyer, as well as Keller's game against Denton Ryan. Current plans were to move the Byron Nelson-Denton Guyer game to 1 p.m. Saturday. Keller and Denton Ryan were set to play at 7 p.m. Friday, weather permitting.

A game between Frisco Centennial and Liberty High School set to be played at Toyota Stadium was also postponed, but has not been rescheduled as of yet, according to Frisco ISD. The game between Trinity and Coppell at Buddy Echols Stadium is now scheduled to kick off at 6 p.m. due to potential delays.

The anticipation of bad weather over the weekend caused other event cancellations.

The Trinity River Wind Festival, scheduled for Saturday, was cancelled with bad weather in the forecast. Burleson's "Boo Bash" was also moved pushed back one week. It is now tentatively slated for Oct. 31.