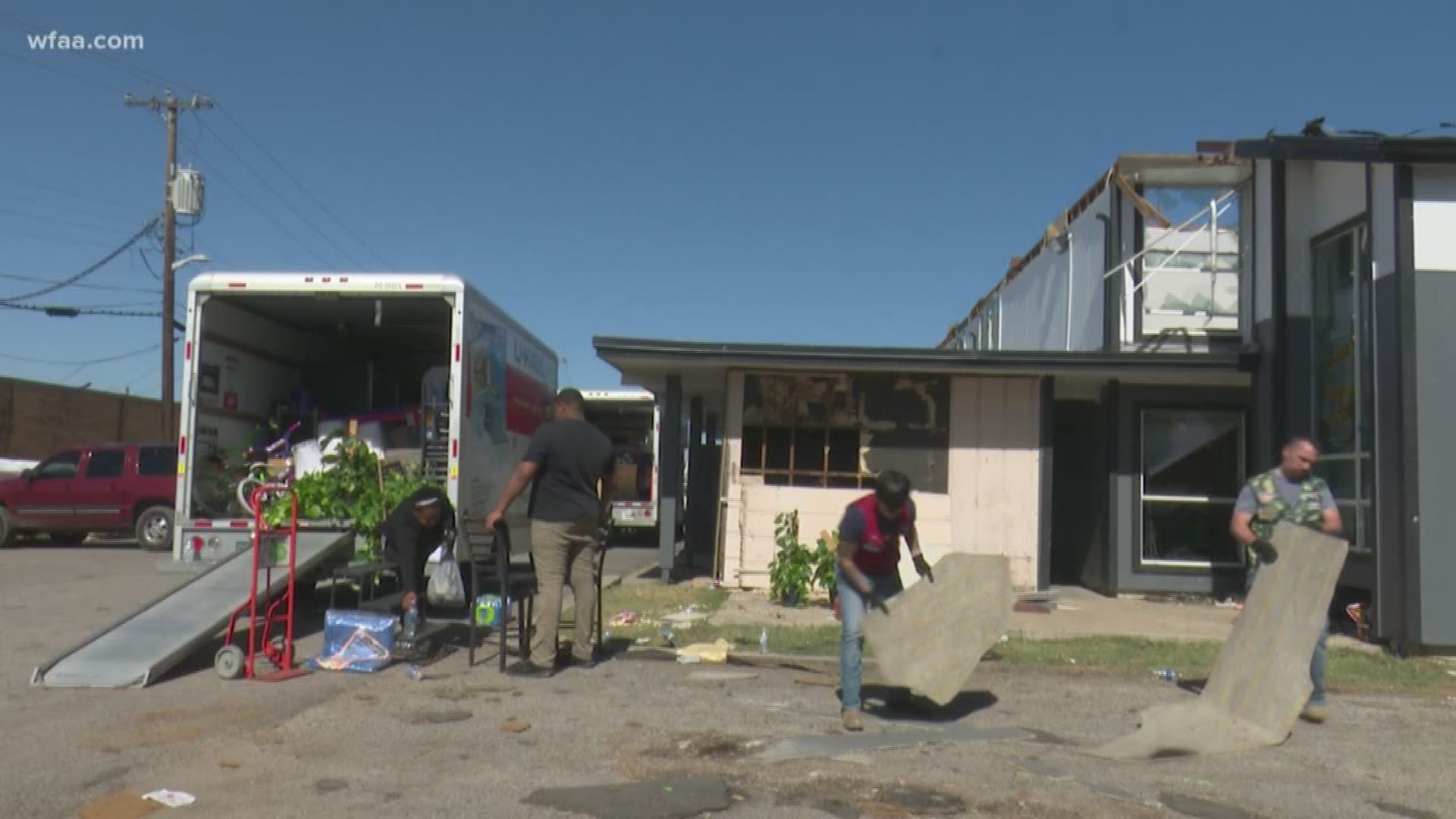 DALLAS — Residents at the tornado-ravaged Southwind Apartments at Brockbank and Walnut Hill were hurriedly loading any belongings they could salvage into trailers and moving trucks on Wednesday all the while complaining about absent apartment managers, not taking their phone calls, or providing any advice on the mass evacuation of the complex.

"We lost everything," Lakisha Miller said while standing in her two-story apartment that no longer has a roof. "Do we need more death? Do we need more people to die for us to get noticed? What is it gonna take?"

Miller and her family were loading a U-Haul as quickly as possible so that she would be able to pick up her two young children at their new post-tornado school. Walnut Hill Elementary is closed and considered a total loss after the tornado.

"We lost everything too," said Corie George-Burns as she and her young son and her fiancé salvaged what they could from an apartment with every window blown out. Debris from commercial buildings to the west piled up against what used to be her carport.

She says apartment management told them to leave immediately, that the buildings will be boarded up soon and eventually torn down. What she did not get was information on any refunds for the rent she has already pre-paid or whether any deposits will be refunded so she can find and afford a new apartment somewhere else.

"It feels like we're not getting any help out here," she said. "They're making it too hard on us and it's not fair. The apartment complex, like they're just not calling us back. They're not talking to anyone of us."

WFAA attempted to reach the Southwind Apartments management as well. Messages have been left. Calls have not been returned. Wednesday afternoon a paper sign was taped to the office door that merely said they were "out to lunch."

"Not being able to find anywhere to go," resident Sharon Perkins said of her biggest concern. "Being homeless basically."

Her family, along with their next door neighbor, shared the cost of a rented U-Haul together to move what they could salvage to storage while trying to find out where to live next.

"We're going in circles," she said. "And we're not getting any help from anybody."

The Red Cross did arrive for the first time at the Southwind Apartments on Wednesday. Red Cross volunteer Diana Jernigan said it only took about 20 minutes for them to exhaust their initial supply of 200 sandwiches, 20 cases of water, and donated tarps and towels.

"This is some of the worst I've ever seen. It really is," Jernigan said. "And these people really need a lot of help."

While also looking for a new place to call home.