Here's a look at what's happening Monday in North Texas, a week after winter storms began to impact millions of Texans. 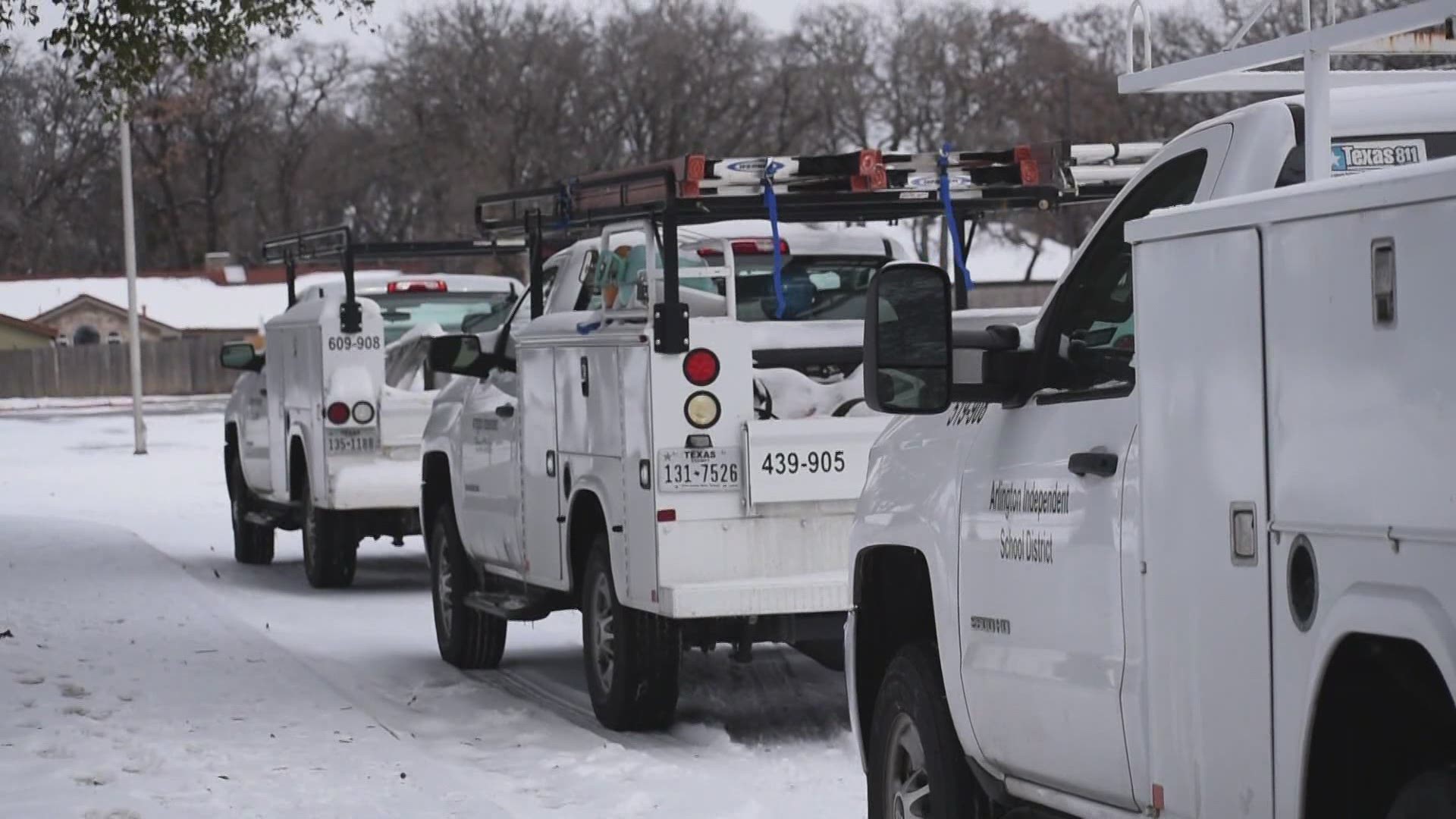 This story will be updated continuously on Feb. 22.

Baker added about 215 water systems now have safe water to drink for their customers. That leaves about 1,100 water systems still under boil water notices across the state.

Gov. Greg Abbott explained power across the state of Texas was back to full capacity as of 2:30 p.m. Sunday, though there were still thousands of Texans without power due to equipment damage and other issues. He said he expects power to be fully restored to those without by early Monday.

Customers facing "sky-rocketing" electric bills will have some temporary relief as officials work through how to handle massive power price increases seen during the outages.

"The Texas Public Utilities Commission called an emergency meeting today to issue a moratorium on customer disconnections for nonpayment," Abbott said during the Sunday news conference. "They are also going to restrict electric providers from sending customer invoices at this time. This pause will give them time to address the electric and power billing challenges that Texans are seeing."

The governor also said he has requested a disaster declaration for agriculture producers in the state from the USDA, saying it was one of the many issues facing the food supply chain across Texas at this time.

Many Texans are also beginning to face the full aftermath of the winter storms, with burst pipes causing damage to their homes. Abbott said the state is bringing in more plumbers to help meet the expected demand over the coming days.

Dallas ISD said Monday that a total of 125 campuses were impacted on some level by last week's winter storm.

"Restoration would include water excavation, drywall replacement and other repairs related to water damage caused by busted pipes," information director Robyn Harris wrote in an email.

"Efforts are ongoing to ensure campuses are ready to receive teachers and students for Wednesday’s return. At this time, we believe reopening will occur, but will continue assessing throughout the day tomorrow. If a different plan needs to be communicated we will do so later tomorrow. (So far, so good.)"

Winter storms caused more than 10,000 blood donation appointments to be canceled in February, Red Cross officials said Monday, and they now need donors to step up to help meet the critical demand they are facing.

Anyone who would like to donate can make an appointment to do so by downloading the Red Cross Blood Donor App, visiting RedCrossBlood.org or calling 1-800-RED CROSS (1-800-733-2767) to find a slot open in their area, officials said.

City officials announced Monday morning that water customers were no longer under a boil water notice and the water is now safe to drink. The city is getting water from the Park Cities Municipal Utility District and will need to keep water conservation measures in effect for a day or two longer, however.

While Dallas has not called for water conservation or a boil water order, the city has responded to hundreds of water main breaks and distribution issues over the past week, officials said.

Dallas so far has confirmed 307 main breaks and leaks in its system with 147 total main repairs done so far. There were 160 total pending breaks or leaks within the system still as of Monday morning.

Two Lowe's locations in Dallas-Fort Worth are giving away clean-up supplies to North Texans dealing with storm damage. Each event will have 500 buckets filled with supplies to give away, with items like trash bags, DampRid moisture absorber and flashlights.

The events start at 9 a.m. Monday until supplies last. The locations are:

The power company said its crews are working to restore power to customers in Lufkin and Nacogdoches, areas that experienced significant ice storm damage. It expects people there will have power again by late Tuesday.

Oncor is asking anyone still without power to report their outage by calling 888-313-4747, texting OUT to 66267, using the MyOncor app or reporting it on oncor.com