Many still don't have proper heat more than four months after the flood. 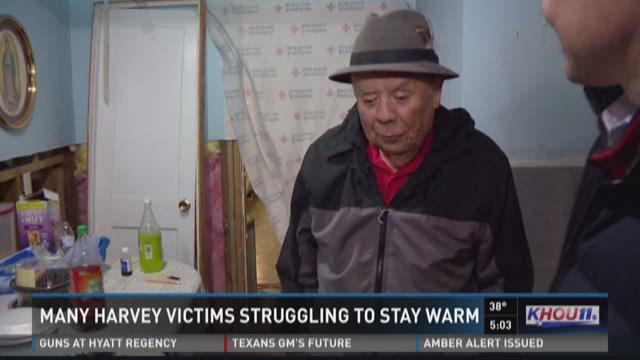 Hurricane Harvey victims living in mucked out homes are struggling to stay warm during the cold snap.

Many still don't have proper heat more than four months after the flood.

“You know, you're not ready,” Simon Caballero said. “Don't have a bed, sofa, chair or heat.”

Caballero's family even has a fire outside to help them stay warm as they make repairs.

Harvey filled the home with more than 3 feet of water. It was the second flood in the 47 years Caballero has lived here.

Walls are still stripped to the studs. Some of them have insulation, but others do not.

“The space heaters don't really do enough,” Caballero said. “But that's all we've got right now.”

Caballero's heating and air system hasn't worked since Harvey. Many others in hard-hit areas are dealing with the same issue.

A group of community volunteers donated items during an event this past weekend. Organizers say some 1,200 blankets were gone within an hour, and they're still trying to locate stores that haven't sold out of space heaters.

He and his family survived the flood, and they'll be dealing with Harvey's aftermath well into the new year.

“Can't give up now,” Caballero said.

At least the cold weather is temporary.