DFW weather timeline: Lingering rain this morning, but clearing and drying this afternoon.

Main round of showers and storms has moved into far eastern areas of North Texas. Only lingering showers and t-storms are happening across the rest of the area. Most rain move out by late morning into the midday hours with a much drier afternoon for most. 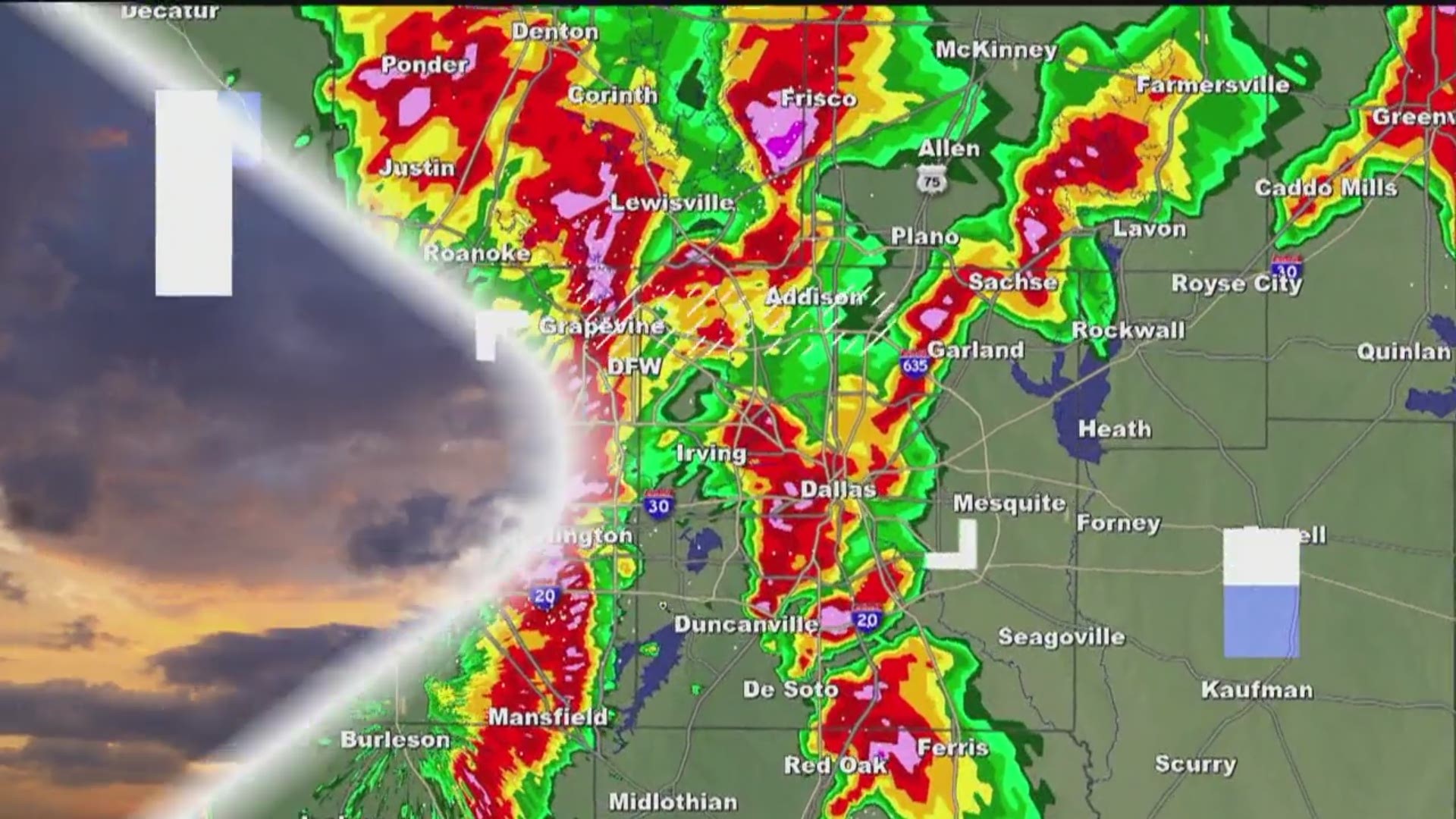 Scattered showers and occasional thunderstorms will continue over the DFW area and central North Texas through late morning into midday before rain moves off to the east.

Heavier t-storms over eastern North Texas are moving east into east and northeast Texas. Main threat with these is a round of heavy rainfall and lightning. Some gusty winds are possible (50-55 mph) as well. There's a very low, but not zero chance, for a storm to produce a brief spin-up in these areas. However, more concerned with heavy rain and gusty winds.

Rain chances will end from west to east across North Texas today. First in western areas and then later this afternoon in eastern areas. Far eastern areas that have not seen storms yet have a low chance at seeing a severe storm the rest of today, but for most of North Texas the severe threat has come to an end.

On and off showers and storms will linger through mid-morning for most of North Texas. It won't rain constantly, but a round or two of more rain is possible over the DFW area.

Mainly just t-storms in and around the DFW area and the rest of North Texas. Nothing severe at the moment, but wind gusts of 40mph are possible in places.

Showers and storms continue to spread across North Texas. Rain will linger in most locations through mid-morning with most places becoming dry by late morning to midday.

Rain has arrived across the western half of the DFW area. Nothing severe, but wind gusts of 30-40 mph possible. Rain will linger for the next couple of hours, so it will be wet morning commute.

Storms moving into the western sides of the DFW area right now. Still on track for a wet and messy morning commute.

Storms are getting close to Tarrant County moving through areas just west of the DFW area right now. Nothing severe at the moment, but wind gusts of 40mph are possible along with heavy rain.

A wet morning commute will be likely for most as storms are due to arrive over the next couple of hours. Once the rain gets here, it will rain for about 2-3 hours give or take. Rain will clear out by mid-morning to midday for most places. Earlier to the west, later to the east.

Our line of storms has entered western North Texas. They will sweep across the rest of the area through the morning hours. Still expecting the timing for the DFW area to be from around 5 a.m to 7 a.m. They are not severe right now, but heavy rain and lightning are likely. Some strong winds are possible as well (40-50mph), but that is below severe limits. It does not look like they will become stronger or become severe as they move west, but we'll keep an eye on everything.

OVERNIGHT: Significant severe storms are still ongoing across parts of the Rolling Plains and Oklahoma. There have been multiple reports of tornadoes, damaging wind, and hail over the last several hours.

Tornado Watches are still in effect for those areas overnight.

For North Texas, thankfully, the "cap" held this afternoon and evening, keeping us quiet. However, storms will arrive in North Texas by Tuesday morning.

Midnight - 2AM: A line of widespread showers and storms will approach the western parts of North Texas after midnight.

2AM - 5AM: Activity begins to approach and cover the western side of the DFW area - think Denton and Tarrant Counties.

5AM - 9AM: Widespread showers and storms sweep through the rest of the DFW area, moving east of Collin and Dallas Counties after 8AM.

9AM - 12PM: Activity moves into East Texas, possibly strengthening during the peak-heating of the day (afternoon/eve).

Best timing for the line of storms to arrive and sweep through the immediate DFW area looks to be from around 5AM to 9AM from west to east.

There is a threat for storms to be strong to severe. While storms are likely for almost everyone, not everyone will see severe storms.

Storms will move east moving into East Texas by midday into the afternoon hours. The rest of Tuesday afternoon will see drier weather and clearing skies.

The rest of the week is MUCH calmer as well, with just warm, muggy and breezy days.