You'll hear about 'downburst' storms in North Texas. Here's how they happen so quickly

The force behind Monday's strong winds was something we'll see often in spring and summer in Texas — a downburst. 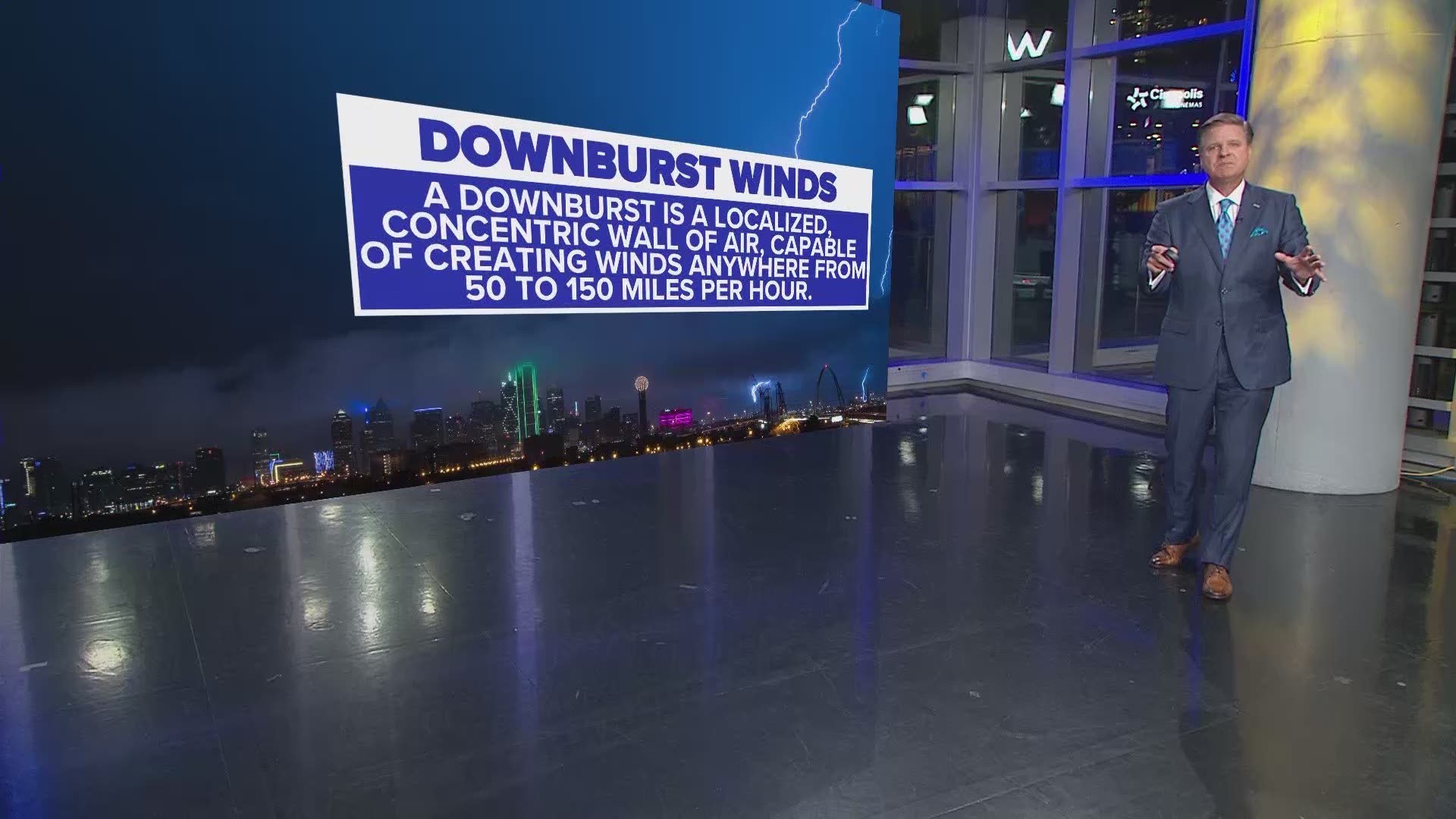 DALLAS — The damaging winds Monday in the Fort Worth Stockyards and Lancaster might have come as a surprise to the rest of North Texas, which, for the most part, saw a sunny, warm July day.

But the Fort Worth storm and several other pop-ups across the area packed a punch: Winds up to 60 mph, heavy rain and lightning. In the Stockyards, part of a metal roof blew off and landed on a car. In Lancaster, large trees were toppled.

That quick shot of severe weather was a good example of how summer storms can form quickly in North Texas, and how damaging they can be, even when it's not a widespread severe weather day.

The force behind Monday's strong winds was something we'll see often in spring and summer in Texas — a downburst.

RELATED: No injuries reported after roof falls on car during storm near Fort Worth Stockyards, officials say

You might remember when the Cowboys' practice bubble collapsed in 2009. A similar downburst-fueled storm was to blame.

Here's raw video from 2009, showing how fast the downburst happened, and the damage left behind:

WFAA Meteorologist Pete Delkus on Tuesday night explained how downbursts work — and why they can be so damaging.

Even if we're not seeing widespread storms, the occasional pop-up storm or shower isn't uncommon during the summer. That's what we saw Monday, when storms began to fire up in parts of Tarrant County and areas along Interstate 20.

When this happens, warm air will rise into the storm.

The warm air is then cooled by the storm and sinks rapidly to the ground. As that cool air pushes down from the storm, a wall of wind will develop and drop to the ground. The wind hits the ground and spreads out, quickly creating those straightline winds, sometimes severe enough to cause damage like we saw on Monday.

Credit: WFAA
Downburst winds happen after cool air drops out of a storm, creating a wall of wind that drops to the ground.

And while Monday's winds were damaging enough, downburst winds can be much stronger, sometimes exceeding more than 100 mph.

The National Weather Service on Tuesday posted a radar analysis of the Stockyards storm, showing both the heavy lightning and a combination of outflow winds.

Here's a quick radar & lightning analysis of the severe thunderstorm that impacted the City of Fort Worth and parts of Tarrant Co. A downburst from this storm resulted in damage at the Stockyards in North Fort Worth early Monday evening. #dfwwx #txwx #fwdspotter pic.twitter.com/Kc61iWisfw

RELATED: The return of Saharan dust to North Texas