Here's what we know about Thursday's massive pileup in Fort Worth

The medical examiner has identified five of the six people killed in the pileup crash. Two were from Fort Worth, two from other parts of Texas, and one from Hawaii. 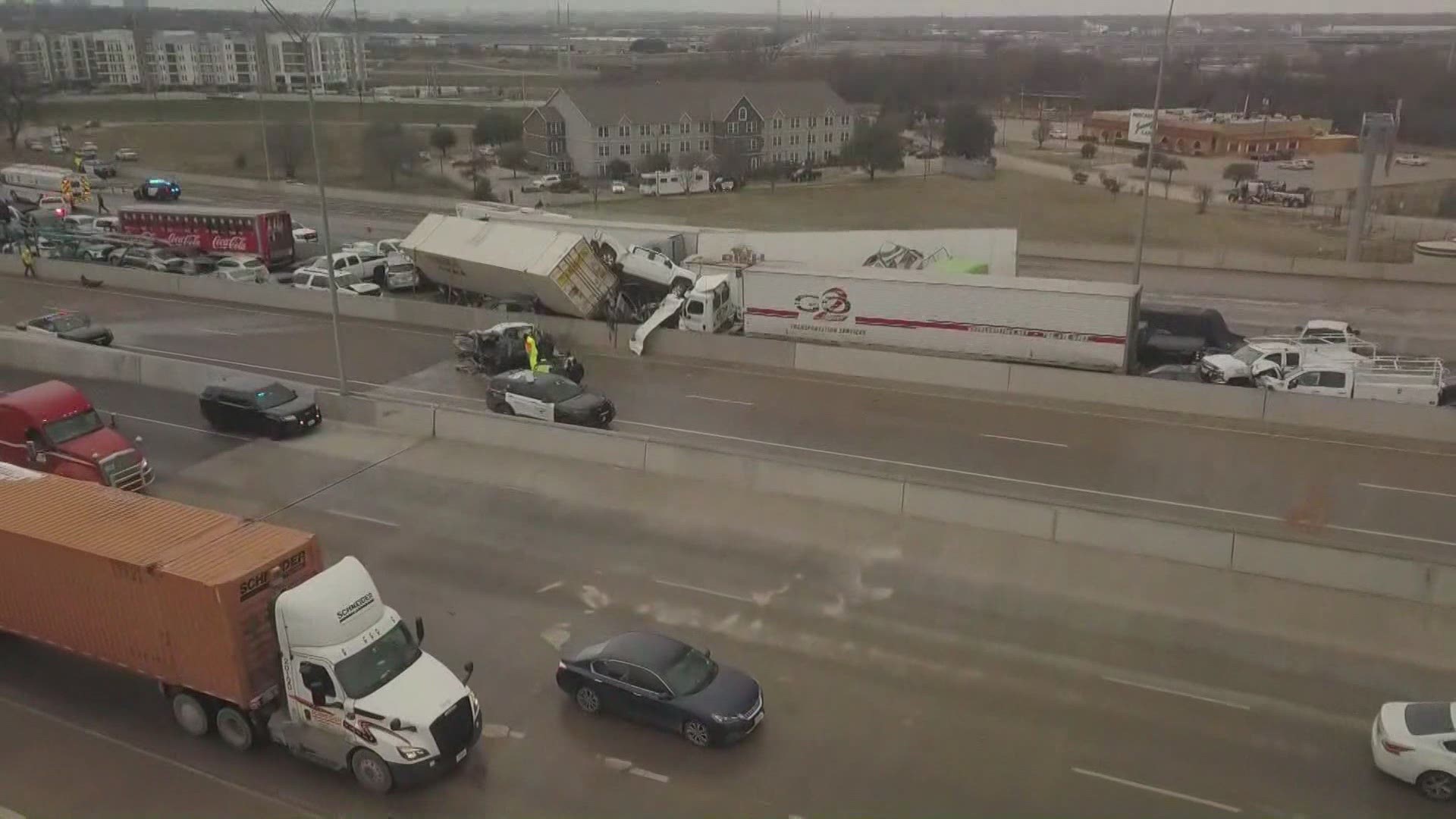 FORT WORTH, Texas — Updated at 2:10 p.m. Saturday to include more information on the victims.

A chain-reaction crash occurred on Interstate 35W in Fort Worth around 6 a.m. Thursday. At least 133 vehicles were involved in the incident, officials said.

Where did this happen?

The accident scene stretched around 1 to 1.5 miles long on the North Tarrant Express lanes, with Fort Worth police reporting the scene at 1601 North Freeway and MedStar reporting it at the conjunction of I-35W and 28th street.

How many people were impacted?

Officials said Thursday evening that six people have died from the pileup crash. They also said 36 people were transported from the scene to local hospitals, and 65 people in the crash sought treatment from injuries either on-scene or at a local hospital themselves.

One woman who survived the crash said she had to crawl out her back car window to get to safety.

Who are the victims?

The Tarrant County Medical Examiner’s Office has identified five of the victims as of 9:50 a.m. Friday. Two were from Fort Worth, two from parts of Texas, and from Hawaii.

Victims who have been identified:

WFAA is still gathering what we know about the victims.

Tiffany Gerred worked for Tarrant County courts. Judge Patricia A. Bennett said she was a dedicated worker who always had a smile on her face.

"Tiffany's passing leaves a hole in the heart of those that knew her," Bennett said in a statement. "She will be missed."

Boyd ISD Superintendent Dr. Tamara Vardy confirmed that her husband, Chris, was one of the people who died.

"Mr. Vardy loves his family very much and is so proud of his wife and two boys," a district statement said. "You would find him at Cross Country meets riding the mule, attending One Act Play performances and cheering from the sidelines and stands for football, basketball and baseball."

Aaron Watson was a managing partner for Jason's Deli. The company said they were "heartbroken by the tragic loss of such a beloved member of our Jason's Deli family."

The statement said Watson has been a leader and mentor for 20 years, and touched the lives of many.

" Aaron’s wife, Jane, also is part of the family and our focus now turns to supporting her and their two children as they face the impossibly difficult days ahead," the statement read in part.

RELATED: 'A tragic day for the Fort Worth family': At least 6 killed in 133 vehicle pileup crash on I-35W in Fort Worth, officials say

Were the roads treated?

Icy roads were an issue across the region due to freezing rain.

Officials with North Tarrant Express, which is where the crash happened, say that their maintenance crews started pre-treating corridors on Tuesday and have been spot treating them since then.

The Fort Worth Fire Department said its investigation, in part, would look into how the road was treated.

Read the full statement from North Tarrant Express Below:

"We join the greater community in our thoughts for the accident victims, their families, and those recovering. NTE & NTE35W maintenance crews started pre-treating the corridors on Tuesday morning in anticipation of inclement weather, and have been treating continuously as they monitor the roadway. We will continue treating the highways through the weekend and into next week, as long as the storm is active. Our crews treat the entire corridor, managed lanes, general-purpose lanes, frontage roads, and ramps, and operate under the same procedure as the Texas Department of Transportation. Additionally, our message boards throughout the corridors have been alerting drivers of the adverse weather conditions and encouraging them to drive with caution. Currently, the crews are assisting emergency responders to manage the accident scene and clean up in order to reopen the corridor, safely."

What caused the crash?

The cause of the crash has not yet been determined.

What are leaders and elected officials doing?

Fort Worth Police Chief Neil Noakes reiterated during the conference that the police and fire departments would continue to work to find out more about the roads being salted.

"I have spoken to state legislators from the region, and they expressed concerns that this roadway may not have been sufficiently pre-treated for icy weather prior to the event,” Canales said in a statement.

State Rep. Ramon Romero Jr., who represents Fort Worth, tweeted that his office is "asking many questions and demanding answers" and called on a thorough investigation.

Fort Worth Mayor Betsy Price tweeted her condolences Thursday afternoon and asked people to pray for Fort Worth.

"My heart is breaking for our community as we come to learn about the extent of the losses we are experiencing from today’s accident," Price wrote. "Our community is pouring out support, and I know that so many of you are asking for a way to help. Right now, what Fort Worth needs most is your prayers – for the families, the injured, and the first responders."

What can I do if I think one of my family members was involved?

Families were being reunited Thursday at Riverside Center at 3700 E. Belknap Street in Fort Worth, police officials said. Family members will be able to pick up their loved ones that were involved in the pileup there. Authorities are asking anyone who suspects their loved ones might have been involved to call 817-546-7826.

At least 30 people showed at the family reunion center, officials said. In addition to those at the Riverside Center, some officers drove people, who had been involved in the wreck to either their homes or workplaces since they had no ride.

Authorities said those at the Riverside Center fall into one of two categories: