The Crew Dragon Endeavour is expected to reach the International Space Station on Saturday. 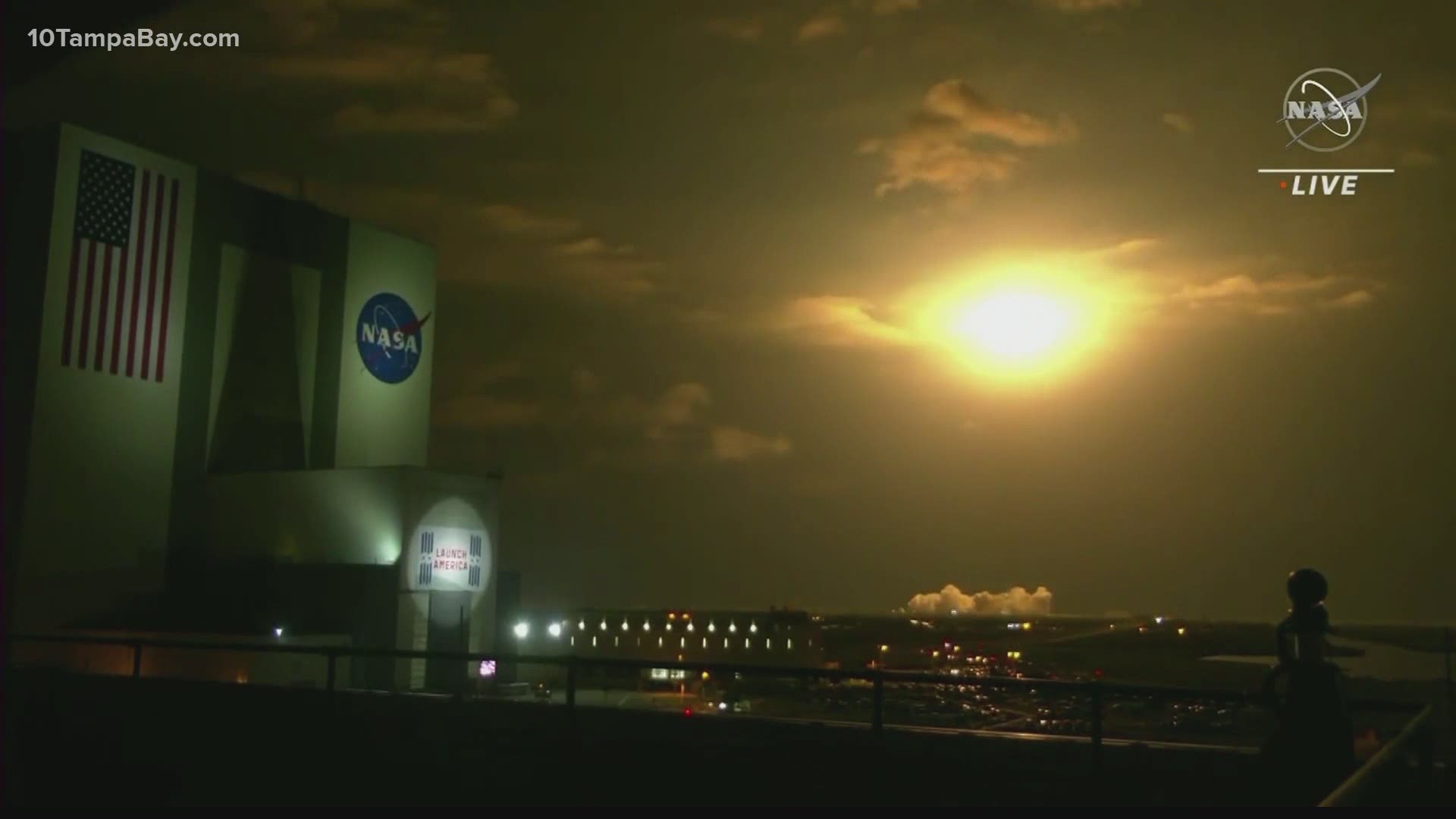 CAPE CANAVERAL, Fla — We have liftoff! The engines of SpaceX's Falcon 9 rocket roared as it lifted the Crew Dragon Endeavour capsule holding Crew-2 into space.

The launch took place at 5:49 a.m. Friday at Kennedy Space Center's historic Launch Complex 39A when the mission's four-person crew was blasted into orbit.

A few "firsts" were marked during NASA, SpaceX's latest launch, including it being the first time a crew took a ride into space in a previously flown Crew Dragon spacecraft on top of a flight-proven rocket.

Friday's launch also marked the third launch of the commercial crew program in less than a year.

Now, NASA astronauts Shane Kimbrough and Megan McArthur, along with JAXA astronaut Akihiko Hoshide and ESA astronaut Thomas Pesquet are heading to the orbiting laboratory to being their six-month stay.

During their mission, the crew will conduct science experiments, complete maintenance on the ISS, and even overlap with the Crew-1 astronauts.

Here's some things to know as NASA and SpaceX embark on another history-making journey:

What to know about the spacecraft and rocket?

According to NASA, Crew-2 will be the first time astronauts ride in a previously flown Crew Dragon spacecraft on top of a flight-proven rocket.

Who is on the crew?

NASA astronauts Shane Kimbrough and Megan McArthur, along with JAXA astronaut Akihiko Hoshide and ESA astronaut Thomas Pesquet will make up the four-person crew headed to the ISS.

Kimbrough will be the mission's spaceflight commander, McArthur will be its pilot, and Hoshide and Pesquet will be mission specialists.

Liftoff! The Crew-2 mission lifts off on a @SpaceX Falcon 9 rocket from @NASAKennedy and is on the way to @Space_Station. More launch photos coming, keep checking back! https://t.co/56Am0ERBaK pic.twitter.com/cyOfCJMqtr

When will the crew reach the International Space Station?

Crew-2 is targeting docking for 5:10 a.m. Saturday, April 24, at the International Space Station. Once the Crew Dragon capsule is successfully locked in, astronauts at the station, along with the crew will work toward hatch opening.

NASA estimates a welcome ceremony will take place by 7:45 a.m.

How long will the crew stay aboard the ISS?

Once the astronauts reach the orbiting laboratory they will begin a six-month mission to conduct science experiments, update the station's solar power system, and perform maintenance in low-Earth orbit.

Are there any historic aspects of this launch?

Just like the ones before it, Crew-2's launch comes with several history-making moments for the space agency.

What will the astronauts do while in space?

The main focus of the Crew-2 astronauts while aboard the International Space Station will be to conduct science experiments. This expedition will predominantly work to continue a series of "tissue chips in space" studies.

"These chips may make it possible to identify safe and effective therapeutics – drugs or vaccines – much more quickly than the standard process," NASA wrote.

Outside of research projects, astronauts will perform maintenance and upgrades to the station itself and complete daily activities to keep themselves healthy.

NASA detailed at least one of the crew's maintenance projects where they will update the orbiting laboratory's solar power system by installing the ISS Roll-out Solar Array compact panels.