This tattoo artist has given more than 10,000 breast cancer survivors healing and closure. 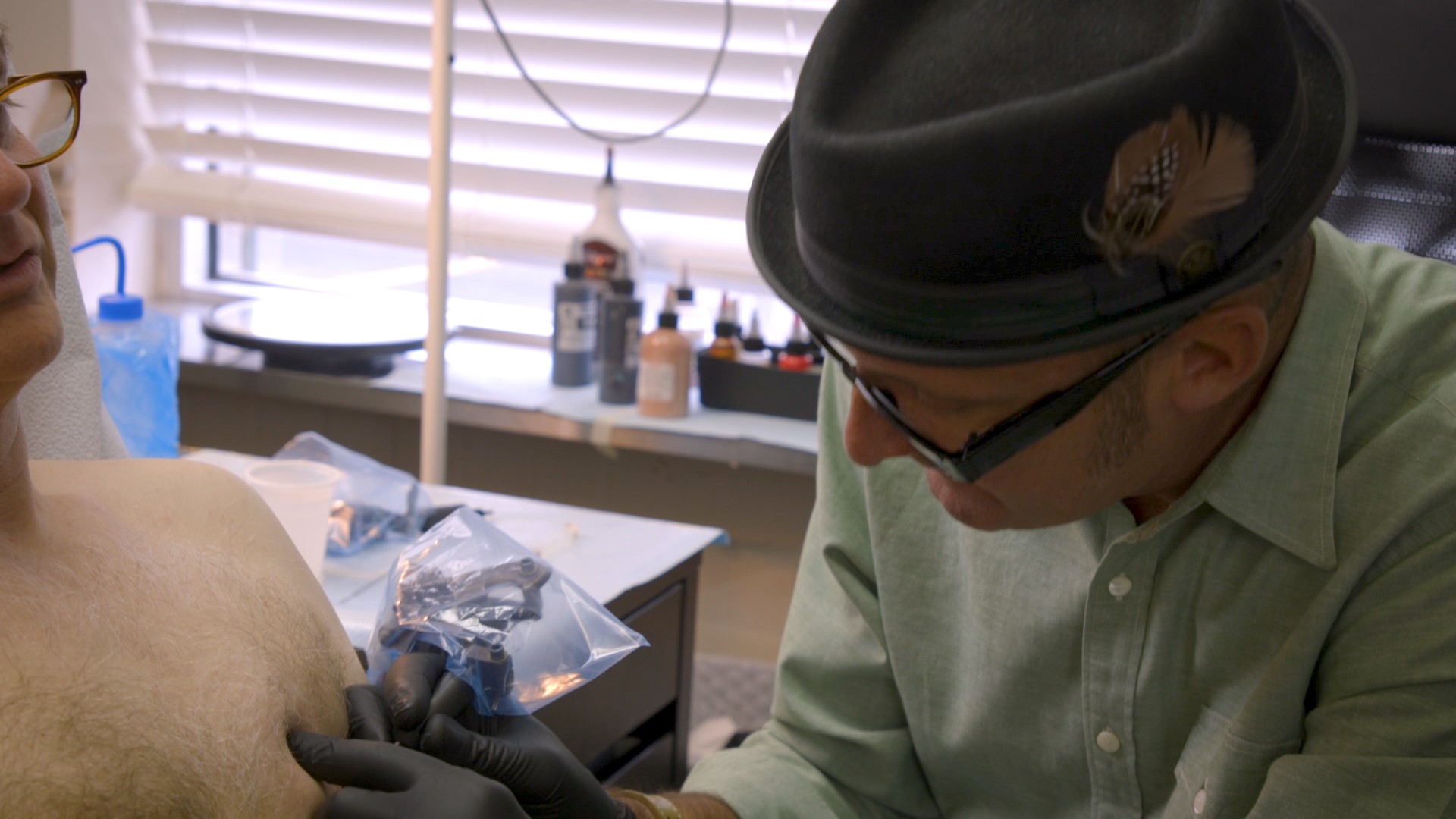 They’re from different states, are in different lines of work and yet, they share a tragic similarity; they are both breast cancer survivors. And as destiny would have it, they both had an appointment in the same office on the same day.

They’re meeting with Vinnie Myers, the man who will provide them with closure and healing in the final step of their long battles.

Since childhood, Myers has loved to draw.

As a young medic in the military, he transformed his artistic skills into an extra income by teaching himself how to tattoo.

After leaving the military, Myers opened his own tattoo shop, Little Vinnie’s, and traveled the world to learn and master different types of tattoo art.

Over time, his tattoo career became an outlet to help others, like his military career had been.

In 2002 a plastic surgeon called asking if Myers would work with his patients.

Myers agreed. He had no idea this specialty would launch him to worldwide acclaim and recognition in the tattoo industry.

Today, Myers has now been tattooing for 35 years, 17 of those with a specialty in 3D nipple and areola tattooing.

“In doing a regular tattoo on someone, it’s a great creative satisfaction. But those tattoos are meant for other people to see. [They’re meant to say] this is who I am to the rest of the world,” said Myers. “The tattoos I do are not meant for everyone to see… it’s a very personal thing and it mean so much more.”

In total, he has tattooed nipples more than 10,000 breast cancer survivors.

THE FINAL PIECE OF THE PUZZLE

June 5, 2019 is just like any other day of work for Myers. But for Hill and Yaffe, it’s the last day of a lengthy journey against cancer.

Both were diagnosed with Stage I cancer.

Yaffe was diagnosed within days of a routine physical where his doctor noticed a lump on his breast. He had noticed the lump before, but as a man the idea of breast cancer hadn’t crossed his mind until his doctor sent him to get a mammogram, Eventually, he had a mastectomy.

“I can definitely relate to women in a way I couldn’t before,” Yaffe said. “It’s been a lot of firsts and now I can say I have my first tattoo.”

Hill was diagnosed after her annual mammogram. When her surgeon scheduled a lumpectomy, he found another piece of tissue that had an usual texture to him. It was later diagnosed as a completely different type of cancer that had gone undetected in prior scans, causing Hill to undergo a double mastectomy.

After a lengthy battle, both Yaffe and Hill have been deemed cancer free. But even after reconstruction and healing,they’re still missing their nipples, which is why they visited Myers.

“[It’s the] final piece of the puzzle being put into place. It’s just closure,” said Hill.

Within an hour of Hill’s arrival at Little Vinnie’s Tattoo Shop, Myers has found the perfect color pink, size and overall look for Hill’s tattooed nipples. While it’s one of the thousands he has done, each tattoo is unique when he sees his customer’s reaction.

“The whole thing is cold. It’s you have cancer, we’re going to cut this off… and you have to do it. You don’t have a choice in the matter. So, they take that from you and then someone is able to give that back. It’s very striking to me the reaction that I would get from women and men when they looked in the mirror for the first time and saw that they were back and they felt whole again,” said Myers.