The NFL player's death leaves a hole in the Texas football community. 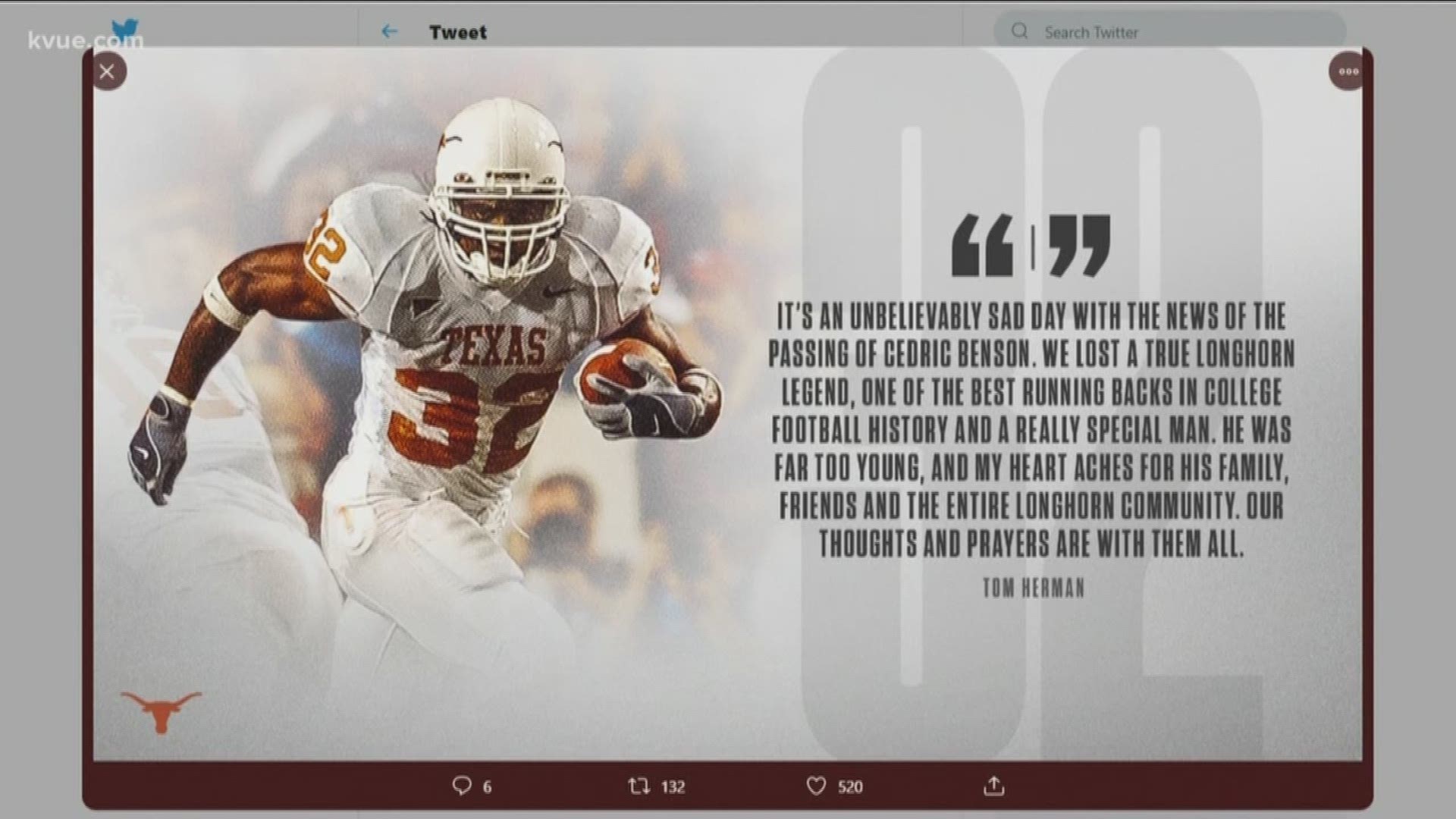 AUSTIN, Texas — Former teammates, UT stars and public figures have taken to social media to offer tributes and condolences after NFL running back and former Longhorn Cedric Benson passed away in a motorcycle crash on Saturday night. He was 36.

Benson's death leaves a hole in the Texas football community. The Longhorn legend rushed for 5,540 yards at Texas, the second most in the team’s history.

Friends and family confirmed he was the victim of a crash in West Austin between a motorcycle and a minivan. A woman in her 30s also died in the incident.

"Sad to hear about Cedric Benson’s passing. RIP my friend and may God grant peace and healing to his family and friends."

Austin American-Statesman sports columnist Kirk Bohls said Benson was “one of my favorite players to ever cover at Texas."

"Direct. Honest. Straightforward. Gave the game everything he had. And always had that mischievous look in his eye."

Austin sports columnist Cedric Golden said Benson was "the most honest athlete I've ever been around."

"I always respected that. Gone too soon. Thoughts go out to his family, friends and former teammates."

Former Longhorns coach Mack Brown, who helped recruit Benson, commented on a post on Instagram on Sunday, saying, "We lost a great one way too soon."

"Saddened by the reports on the passing of Cedric Benson," Brown wrote on Twitter. "We've coached a lot of tough players but none were tougher than Cedric. He was a true spirit. Our thoughts and prayers are with his friends and family on this sad day."

“Sally and I are just grief stricken with Cedric’s passing," said Brown. "He was as good as you’ll ever see as a football player and as tough as they come. But what I’ll remember most is what a special, special person he was. We always enjoyed talking with him because he was such a bright and unique guy. There will never be another one like him, and he will be dearly missed by so many. It’s just heartbreaking, but we feel very fortunate to have had him in our lives.”

“Being two of the biggest names in our recruiting class in 2001, Cedric and I roomed together our freshman year," he said. "We became really great friends. For that freshman class, he was head of the offense and I was head of the defense. That was our mindset always. We really had a special bond that started as soon as we roomed together and carried on long after college. His favorite thing to call me was cuddy. I loved it because it reminded me of my hometown. On the field, Cedric was a workhorse and one of the toughest players I’ve ever been around. He will always be remembered as a Texas legend and best of all a really good friend that I can tell my kids about. It’s a very sad day, but I’m so lucky to have had such a wonderful relationship and so many great memories.”

Former Longhorn and NFL wide receiver Quan Cosby said he was devastated by the news.

"Our hearts are heavy this morning with the loss of Longhorn legend Cedric Benson. A consensus All American, 2004 Doak Walker Award winner, and second on the UT all-time rushing list. He made the UT Hall of Honor in 2014 and played eight seasons in the NFL. RIP, Cedric."

The NFL said it was mourning Benson's passing.

"Heartbreaking reports this morning that former Midland Lee, Texas and NFL running back Cedric Benson was killed in a car accident on Sunday morning. RIP to the former Dave Campbell’s Texas Football coverboy."

Chad Johnson was among several other NFL stars who offered messages after Benson's tragic death.

Benson's death has resonated beyond the Texas sports world, leaving fans shocked by the news of his sudden passing.

Packers fan Lil Wayne was among other big celebrities reacting to the news.

"My condolences," he wrote on Twitter. "Packer 4ever. Love everyday."

On Sunday, Benson's lawyer, Sam Bassett, said, "Cedric was not just a client, he was my friend. He was immensely talented and fierce on the football field yet most have no idea the difficulties he overcame to achieve what he did. Though imperfect in some respects, once Cedric was your friend you understood how kind, sensitive and loyal he was as a man. He was like a younger brother or nephew to me. I will miss him very much."

In January, Benson posted on his own Instagram account with an image reading, "Legends never die" – a message fans have found particularly heartbreaking about a man gone too soon."

"It's an unbelievably sad day with the news of the passing of Cedric Benson," said Texas Longhorns head coach Tom Herman. "We lost a true Longhorn legend, one of the best running backs in college football history and a really special man. He was far too young, and my heart aches for his family, friends and the entire Longhorn community. Our thoughts and prayers are with them all."

Forever a Longhorn, you will be missed, Big Ced.

Workers told to choose between Trump speech, using paid time off or no pay