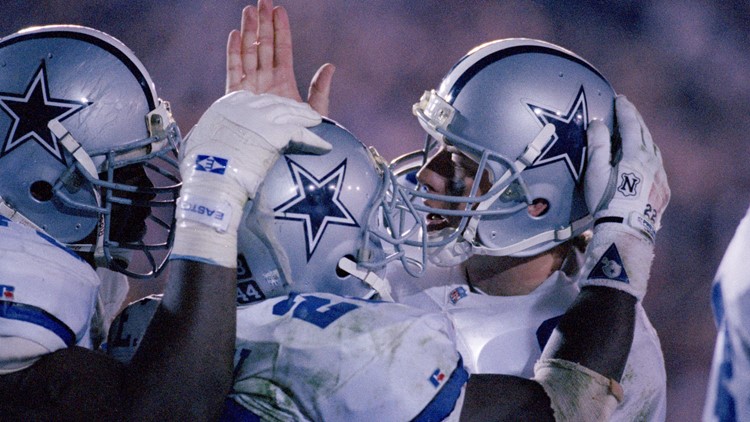 Photo by: AP
Dallas Cowboys quarterback Troy Aikman, right, is congratulated by teammate after their 52-17 victory over the Buffalo Bills in the Super Bowl XXVII in Pasadena, Jan. 31, 1993. Aikman was named Most Valuable Player for the game. (AP Photo/David Longstreath)

The Dallas Cowboys returned to the Super Bowl 27 years ago

Twenty-seven years ago, the Dallas Cowboys squared off with the Buffalo Bills for Super Bowl XXVII at the Rose Bowl in Pasadena, California.

For the Bills, it was their third straight opportunity to deliver Buffalo a world championship after kicker Scott Norwood missed wide right against the New York Giants in Super Bowl XXV, and running back Thurman Thomas' missing helmet on Buffalo's first series may have been part of a butterfly effect that led to a loss to Washington in Super Bowl XXVI.

For the Cowboys, just making the game itself was vindication that wildcatting owner Jerry Jones' way worked. From firing legendary coach Tom Landry as soon as he bought the team in 1989, to hiring college buddy Jimmy Johnson to take Landry's place, to trading Herschel Walker later that season amid a 1-15 campaign, Jerry's way produced tangible results.

The Bills took an early 7-0 lead in Pasadena, and it looked like the Cowboys may be out of their element. Dallas went three-and-out on their first possession, but Bills special teams ace Steve Tasker blocked a Mike Saxon punt that gave Buffalo first-and-10 inside the Cowboys' red zone.

When Dallas had a chance to respond, they got as far as their own 40-yard line until boneheaded penalties stalled their drive. Thanks to a roughing the passer penalty on defensive tackle Leon Lett and a 21-yard catch by receiver Andre Reed, the Bills had first-and-10 at the 50-yard line. Things were going Buffalo's way as they led 7-0, the Cowboys offense was sputtering, and there were five minutes left in the first quarter.

They say turnovers come in bunches. For the Bills, they turned the ball over nine times against Dallas.

Bills returner Brad Lamb took a deep Lin Elliott kickoff to the Buffalo 10-yard line. That wasn't the biggest misfortune to happen on that drive. Cowboys defensive end Charles Haley sacked Kelly, forced a fumble around the goal line, and defensive tackle Jimmie Jones scooped up the loose ball and tumbled into the end zone. Dallas took a 14-7 lead to start the second quarter.

The Bills weren't losing control of the game just yet. Buffalo marched 57 yards to the Dallas 1-yard line, facing a fourth-and-goal. Kelly threw his second interception of the game as safety Thomas Everett picked off the future Hall-of-Famer to stifle the Bills' rejoinder.

The game started to settle back down as Dallas punted. However, the Bills were dealt a tremendous setback when Kelly injured his knee on a hit from linebacker Ken Norton, Jr. The good news was Buffalo had arguably the greatest backup of the generation in Frank Reich, who led the Bills from an improbable 35-3 deficit in the AFC wild-card that postseason to defeat the Houston Oilers in overtime.

Reich helped Buffalo finish the drive as kicker Steve Christie managed a 21-yard field goal after another dominant goal-to-go performance from the Cowboys defense. Buffalo trailed 14-10 with 3:24 until halftime when Michael Jackson would perform.

Dallas' offense featured triplets in Aikman, who was the brain, receiver Michael Irvin, who was the heart, and running back Emmitt Smith, who was the brawn. The two-time NFL rushing champion was responsible for the Cowboys' 44 yards on their 72-yard scoring drive that concluded with The Brain connecting with The Heart for a 19-yard touchdown to take a 21-10 lead.

The last of the lug nuts on the Bills' bus fell off as running back Thurman Thomas fumbled on the next play from scrimmage with Jones recovering at the Bills' 18-yard line. The very next play, Aikman threw an 18-yard touchdown pass to Irvin that remains to this day as one of the Super Bowl's most iconic moments.

With a 1:36 to go until halftime, Reich and the Bills had a chance to cut into Dallas' 28-10 lead. The drive got off to an inauspicious start when Reich fumbled, but backup running back Kenneth Davis recovered. It made no difference as two plays later cornerback Larry Brown picked off Reich, foreshadowing what the former TCU Horned Frog would do three years later when Dallas returned to the Big Game.

Dallas ran out the clock to get to halftime, and they had the ball to start the third quarter. The Cowboys couldn't overcome the Bills on third-and-goal from the 2-yard line, and elected to have Elliott kick a 20-yard field goal to increase their lead 31-10.

After the Cowboys and Bills traded punts, Buffalo got the ball at their own 39. Reich threw a 40-yard touchdown pass to receiver Don Beebe that had Johnson upset on the Dallas sidelines as he believed the Buffalo passer was beyond the line of scrimmage. In the grand scheme of things, the Cowboys were still ahead 31-17 with the whole fourth quarter ahead of them.

The Cowboys and Bills both went three-and-out, but Dallas finally responded to the Beebe touchdown with Aikman throwing a 45-yard pass to receiver Alvin Harper on a two-play drive that started at the Cowboys' own 44. Harper dunked the football over the crossbar and Aikman ran toward the end zone flashing his index finger in the air, indicating the Cowboys were No. 1 — all the while Aikman kept his signature focused, competitive countenance behind his face mask.

Everett intercepted Reich on the next drive as the Bills desperately tried to blast into the Cowboys' 38-17 lead with 9:50 to play. Dallas took three plays for Smith to rush for a 10-yard touchdown on the ensuing drive as Dallas enjoyed a 45-17 lead with 8:23 to go.

Reich completed a 7-yard pass to Reed the next drive, but he fumbled after a false start. Norton rolled the football, staying calm amid the madness a loose ball brings on any gridiron. The linebacker finally scooped up the football and returned it for a 9-yard score as Dallas enjoyed a 52-17 lead.

With 4:56 to go in the game, another iconic Super Bowl moment occurred, but one that Lett would rather forget. Defensive end Jim Jeffcoat sacked Reich, who fumbled the ball. Lett scooped up the loose football and returned it 64 yards towards the Dallas goal. As the defensive tackle was about to cross the goal line, he showed the football with one hand out to the side, paying homage to the way that Irvin would occasionally score uncontested touchdowns.

Lett's touchdown was contested. Beebe sprinted all the way to track down Lett and forced a goal line fumble that went out of the back of the end zone for a touchback. If Lett had scored, the Cowboys would have owned the Super Bowl record for most points with 59 — a nice record to have along with their corresponding record for fewest points allowed, three, set in their 24-3 win over the Miami Dolphins in Super Bowl VI.

Lett had the final word in the Big Game though as his 8-yard sack of Reich on the game's final play let the confetti fly. Aikman won the game's MVP award, and ostensibly a trip to Disney World. The Cowboys secured the Lombardi Trophy after a 15-year drought, and even more credence was given to the Jerry way working in Dallas.

However, the Super Bowl drought is at its greatest ever in club history with 24 seasons and counting. Jerry and Cowboys fans everywhere are hopeful the upcoming matchup between the Kansas City Chiefs and San Francisco 49ers is the last Big Game to not feature Dallas, and that they can hear the words Dale Hansen uttered after the Cowboys vanquished the Bills in Super Bowl XXVII.

"Dallas, your Cowboys are champions."

What are your favorite memories of Super Bowl XXVII and the new dynasty in Dallas? Share your recollections with Mark on Twitter @therealmarklane.

When is Super Bowl 2020: Date, time, performers and more