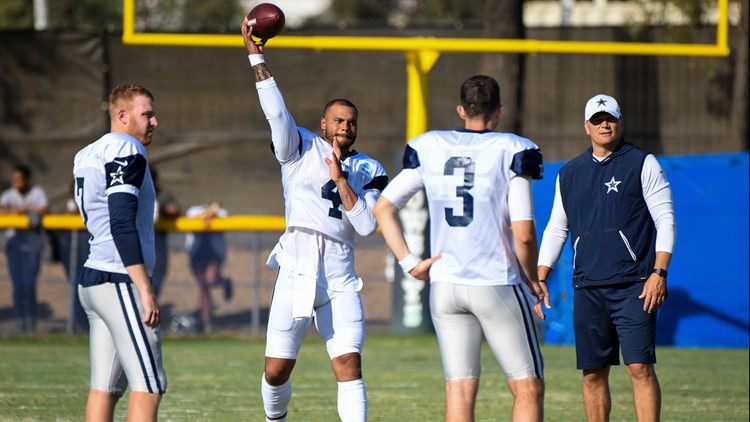 The Cowboys have needs at quarterback beyond just getting Prescott signed

The biggest question surrounding the Dallas Cowboys this off-season revolves around QB Dak Prescott. Few doubt that he’ll be under center for the team in 2020, but how the Cowboys go about paying Prescott remains to be seen.

However, how Dallas pays Prescott is just a part of their worries at the quarterback position. The depth chart at QB for the Cowboys might currently read Prescott as the starter and Cooper Rush as the backup, but that means offensive coordinator Kellen Moore would have an argument for being the second-best QB in the organization if he were still suiting up.

If the Cowboys are going to spend the money investing in the position with Prescott, they should seriously consider upgrading his replacement to cover themselves in case something happens to him. Rush might be a good third-string quarterback, but he leaves much to be desired as a backup and the team would be in trouble if he had to play any meaningful snaps.

The Cowboys have tempted fate the last few years and gotten away with it because Prescott is a big, strong QB, who’s as durable as they come. The veteran signal caller fought through a shoulder injury late in the year in 2019 and has yet to miss a game in his first four seasons in the NFL.

However, it’s a violent sport and injuries do happen, so the Cowboys would be wise to strengthen their backup quarterback spot. Nothing ruins a season faster than having a backup QB incapable of winning a few games, just ask the 2015 Cowboys.

The good news is Mike McCarthy knows the value of a solid backup quarterback. McCarthy won games in Green Bay when his star pupil Aaron Rodgers went down. The Packers played with second and third-string QBs when Rodgers missed extended time in 2013, as well as 2017. Matt Flynn helped keep the Packers in the playoffs in 2013, while Brett Hundley won games when he was forced into a starting role a few years ago.

Rush doesn’t nearly have the pedigree of Flynn or Hundley. He came into the league as an undrafted free agent from Central Michigan and has yet to take any meaningful snaps in the NFL. That doesn’t mean he can’t be successful, but it’s difficult to see Rush keeping the Cowboys competitive should the team need him to play any significant games.

The Cowboys are in win now mode and they’ve built a team that is trying to compete for a Super Bowl in the 2020 season. It would be a shame to have a season go down the drain because they didn’t have a competent backup QB.

Dallas has the talent and Jerry Jones has never been more anxious to win than he is right now. It would behoove the Cowboys to have a better backup plan at quarterback and it’s a good class of free agents at the position. It could get a tad expensive but some of the options include Case Keenum, Marcus Mariota, Matt Moore, or Chase Daniel.

The Cowboys would be smart to lock-up Dak Prescott to a long-term deal and they would also be wise to add a good backup to keep the team on track in case of a Prescott injury.

Heading into the 2020 season with Prescott and Rush would be a risky proposition and not something the Cowboys should entertain.

Do you think that the Cowboys need to improve at backup QB ahead of the 2020 season? Share your thoughts with Ben on Twitter @BenGrimaldi.

Could the Dallas Cowboys sign and trade quarterback Dak Prescott?