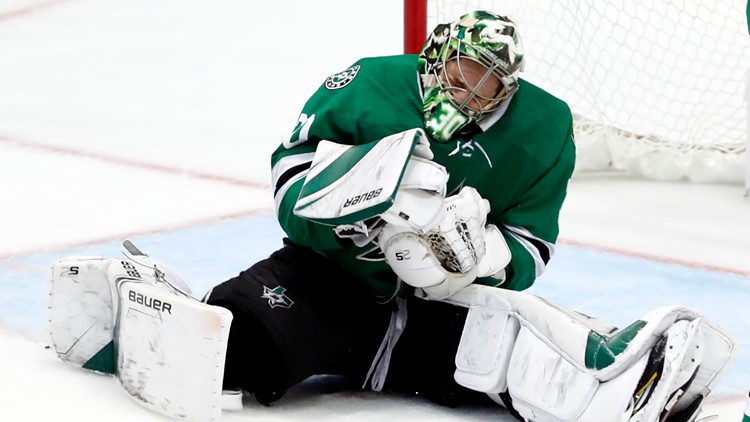 Photo by: AP
Dallas Stars goaltender Ben Bishop reacts after being hit by a puck during the third period in Game 6 of an NHL second-round hockey playoff series against the St. Louis Blues, Sunday, May 5, 2019, in Dallas. (AP Photo/Tony Gutierrez)

ST. LOUIS — Game 7 is the pinnacle of playoff hockey.

It's the rare moment when both teams play to keep their seasons alive.

Speaking of "home," apparently it means nothing this series as the home team is a bewildering 2-4.

You read that correctly. The home team has won two out of the six games played so far.

Stars fans know home ice doesn’t mean much because 2016 is still fresh in their minds.

The Stars lost in the second round of the Stanley Cup Playoffs - in Game 7 at home - to the St. Louis Blues.

The Stars hope to avenge that 6-1 loss with a win tonight, which would send Dallas to the conference finals for the first time since 2008.

Bishop played in a couple of them in 2015 with Tampa Bay.

He won them both. Emphatically.

Bishop saved every shot he faced in those two games, en route to a pair of shutouts.

At 32 years old, Bishop is in the midst of his best season as a pro and he's a finalist for the Vezina Trophy, which is awarded to the league's top goaltender.

During Sunday's 4-1 loss to the Blues, Bishop took a slap shot to the collarbone, which led to a controversial Blues goal as the Stars goalie writhed on the ice.

Bishop stayed in the game, but was later removed after another Blues goal.

48 hour after the injury, coach Jim Montgomery confirmed Bishop will play for the Stars in game 7.

Stars forward Roope Hintz will also play in game 7, after injuring his left foot in game 6.

The Stars are 3-0 this postseason when Hintz scores.

But, make no mistake, the x-factor for a Stars victory is the man in net as Bishop looks to eliminate the team that drafted him with the 85th pick in 2005.

7 p.m. from the Enterprise Center in St. Louis.