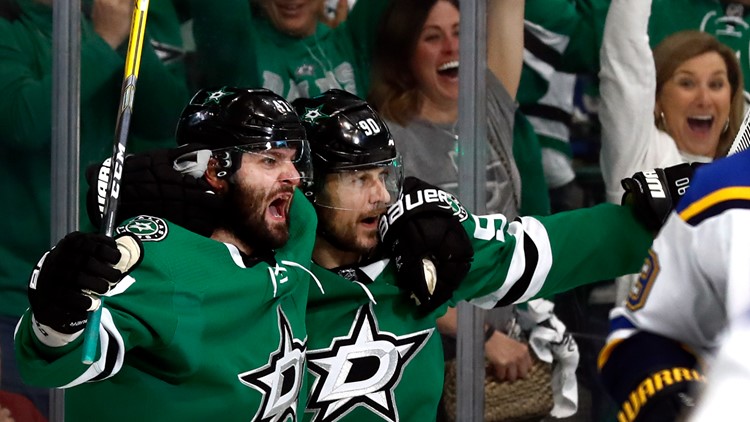 Photo by: AP
Dallas Stars' Jason Spezza, right, is congratulated by Alexander Radulov after scoring during the first period in Game 4 of the team's NHL second-round hockey playoff series against the St. Louis Blues, Wednesday, May 1, 2019, in Dallas. (AP Photo/Tony Gutierrez)

Stars bounce back at home to even series with Blues

That's what Jim Montgomery wanted to see more of after the Dallas Stars lost Game 3 at home to the St. Louis Blues on Monday night.

The Stars head coach got what he asked for in Game 4.

After falling behind early on a Vladimir Tarasenko power-play goal, the Stars scored the game's next four goals en route to a 4-2 victory on Wednesday night at the American Airlines Center.

The Stars played with plenty of it.

Down 1-0 in the first period, breakout Star forward Jason Dickinson scored to even the score.

With 52 seconds left, forward Jason Spezza gave the Stars a 2-1 lead and Dallas never looked back.

Defenseman and Round 1 Game 6 hero John Klingberg extended the lead in the second period. Minutes later, forward Roope Hintz scored his fifth goal of the playoffs to make it 4-1.

Montgomery made a few lineup changes before Game 4 and the moves reflected on the ice and the scoreboard.

“At one point, Mats Zuccarello looked back at me on the bench and said, ‘Coach. We’re up 4-1. We’re having fun. Relax.”

Reporter: "And did you?"

A smile spreads across Monty's face. A familiar smile. A smile of a man who knows who his team is, what makes them tick and how they respond to adversity.

A team that collapsed down the stretch a year ago has come back stronger, more resilient and punches back when they're nudged toward the ropes.

The Stars have trailed a playoff series 2-1 twice in the last two weeks.

Both times they won Game 4 resoundingly and decisively -- with a combined score of 9-3.

When asked how the team is able to stay focused amidst the highs and lows, Spezza attributed it to "experience."

The 35-year-old veteran has 77 playoff games under his belt, but for guys like Dickinson (10 games) the first round provided a learning experience and guide to overcoming adversity.

The Stars trailed their opening round series with the Nashville Predators, 2-1. Dallas then won the next three games (and the series) by a combined score of 13-5.

There's no guarantee the Stars will win Game 5 in St. Louis on Friday night at 8:30 p.m.

But, they have the confidence, the momentum and the desperation to do so.