"This pandemic's no joke," said retired firefighter Jamie Morphis. "And none of us want to get it. So we try to be pretty smart about it the best we can." 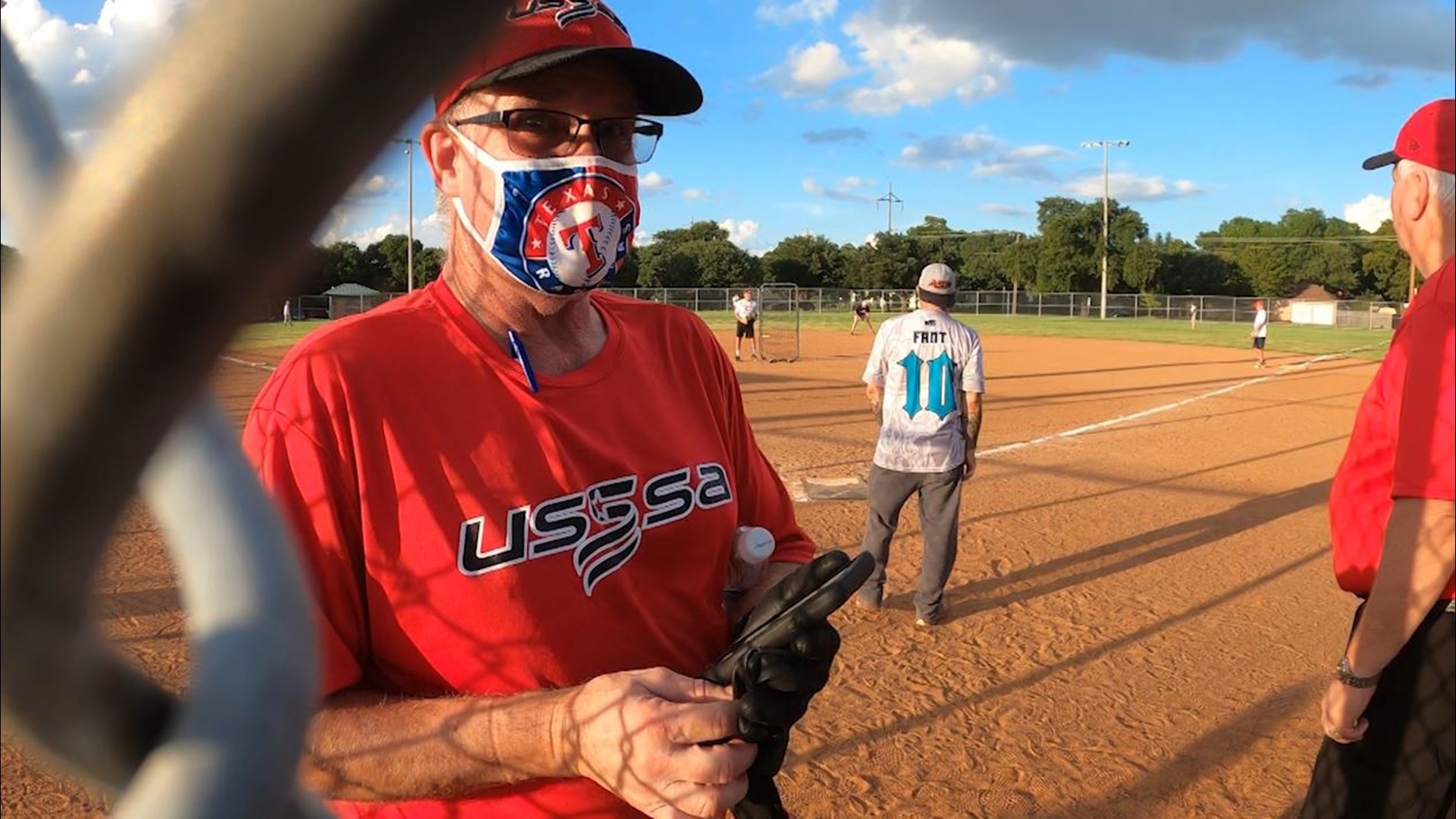 RICHARDSON, Texas — As Major League Baseball attempts to restart its season delayed by COVID-19, a group of seniors in Richardson are showing that it can be done safely — if you're willing to abide by a few precautions along the way.

"It did shut us down," said 85-year-old Eldon Brast, president of the Dallas Area Senior Softball Association. The group is made up of approximately 160 men, age 50 and above, who play year-round on Tuesday and Thursday nights at Richardson's Heights Park. Back in March, at the start of the pandemic, the City of Richardson closed its parks to help keep the virus at bay. So, for seven weeks, there were no softball games in Richardson for the first time in years.

But now, fast-forward to July. These men of a certain age, including octogenarians like Brast, are rounding the bases again: only this time with a few modifications.

"Because we enjoy it. It's the only reason I got," umpire Larry Pryor laughed from behind a protective Texas Rangers mask when asked about why they continue to play with the pandemic potentially on the field with them.

"I feel safer with it," he said of the mask. "I am pretty concerned. I know several people that have got it, the COVID so far," he said. Some of his friends, including at his church, have contracted the virus, he said.

"I bleed garnet and gold," he said of the mask he wore emblazoned with the logo of his alma mater, Florida State University.

"Well because I'm 73 years old and I don't want to get COVID," he said of his reasons for wearing the mask while in the dugout and while directing traffic on the bases. "We're very careful and cautious. But this is the game we love. We love the fellowship. And this is what we do all summer, so we just enjoy being together."

And they get to keep enjoying it if they stay as socially distant as they can and wear a mask when they can't.

"This pandemic's no joke," said retired firefighter Jamie Morphis, his voice muffled by a blue neck gaiter he wore while in the dugout. "It's no joke and none of us want to get it. So we try to be pretty smart about it the best we can."

His fellow RedWings teammate, a 70-year-old named Joe Cantrell, made sure he was wearing his face covering too.

"We suck," he laughed when I asked how good the RedWings were. "Well, you asked the truth," he said.

And Cantrell will be honest with you about one more thing. He wears a mask in the dugout because he had heart surgery and had a pacemaker implanted just a few weeks ago. Once he gets his strength back, he says the mask might come off.

"I'm 70 years old. If the bug bites me in the ass it bites me in the ass. I've lived my life," he said. "I'll be around for a while but the battery in this thing is gonna last longer than me," he said pointing to the location of the pacemaker on the left side of his chest.

But the men of the Dallas Area Senior Softball Association know that their willingness to wear a mask, and to keep their distance, lets them continue playing the game they love. Often a player walks around with a large bottle of hand sanitizer too.

"It's like dealing with a bunch of 12-year-old kids," Eldon Brast said with a laugh. "Well, some of them complain about everything," he said of the only mild inconvenience of holding the job as president of the league.

But what they don't complain about, he says, is the need to be careful, to keep COVID-19 off the field.

Maybe, there's a lesson for everyone. If a bunch of old guys can accept a few changes to keep themselves in the game, maybe the rest of us in a pandemic can step up to the plate too.

"Yeah, we're just glad we can be playing, you know," Brast said.