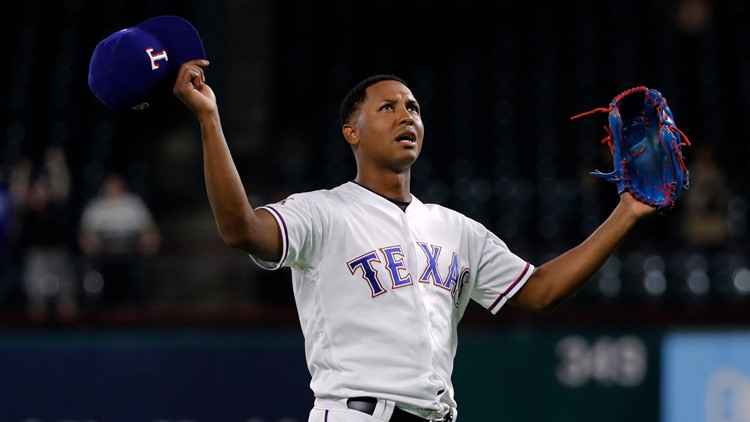 The Texas Rangers will be trying to find their closer for the upcoming season during Spring Training with two candidates in mind.

Jose Leclerc is going to be the name to watch as the man who will be given the first opportunity to come in and close games out in the ninth. Leclerc finished the 2019 season with a save percentage of 77.8% going 14 for 18 in save opportunities in an up and down year.

The only other pitcher on the roster last season to record double-digit saves for the Rangers was Shawn Kelley who went 11 for 15 in save opportunities after he claimed the role from Leclerc following a disastrous April for the Rangers’ young reliever. Kelley, however, is currently a free agent leaving Leclerc as the clear cut top contender to reclaim the closer role.

The season numbers from Leclerc in 2019 should be cause for some concern, however. Last year, the closer hopeful posted his second-worst numbers in his short career in earned run average (4.33), earned runs (33), walks and hits per inning pitched (1.325) and hits per nine innings pitched (6.8). A statline like that doesn’t lend to much optimism that Leclerc can fix it in one offseason but relievers are often volatile from year to year.

For him, the 2018 season should provide the optimism you seek. That year, his ERA (1.56), ER (10), WHIP (0.850) and HP9 (3.7) were sparkling and earned him a contract extension over last winter. The old adage for a scout is that if you have seen him do it once, he can do it again. For Leclerc and the Rangers, they are banking on that being true.

In the game of baseball, and especially out of the bullpen in high leverage situations, the skills required are as much mental as physical. If you don’t have a strong mental capacity to put bad outings behind you, it can leak into the physical aspects of the game. That’s not to say that Leclerc is mentally weak but more that it might be that Texas put too much on him too quickly to be the everyday closer following a breakout 2018 campaign.

Going into the 2020 season, Leclerc should be better prepared for what the Rangers require of him on a night in and night out basis. If 2019’s down year is more of an indication of what is to come for the closer, the team might look to Rafael Montero who spent most of the second half of the 2019 season as the setup man out of the bullpen. Montero has yet to record a major league save in his career but he did strike out 10.55 batters per nine and walk just 1.55 per nine in his 22 innings in 2019.

If the team and general manager Jon Daniels are looking for an outside option who could provide a veteran presence and experience in the role, then a name to watch out for is free agent Pedro Strop. If the name sounds familiar then you might recall that Strop played for Texas from 2009 to 2011 until he was traded to Baltimore for Michael Gonzales. Strop has spent the last seven years with the Cubs. He has recorded 23 saves over the last two seasons.

For the Rangers, the closing job will begin with Jose Leclerc. The question then becomes whether or not he can lock down the job all year or will the Rangers be on the hunt for a closer by the trade deadline?

Do you think Jose Leclerc will have a strong season as closer for the Rangers or could they use more protection in the role? Share your thoughts with Patrick on Twitter @PatSportsGuy.

With Gallo entrenched, Rangers have hope for retooled outfield