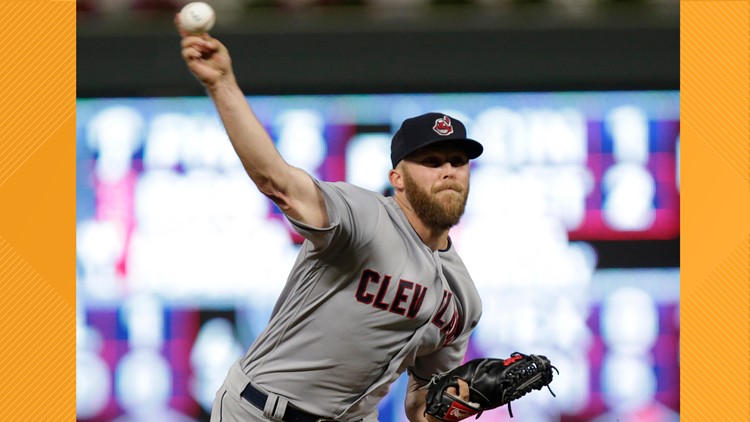 Photo by: AP
Cleveland Indians Cody Allen throws to a Minnesota Twins batter during the ninth inning of a baseball game Tuesday, July 31, 2018, in Minneapolis. The Indians defeated the Twins 6-2. (AP Photo/Andy Clayton-King)

The Texas Rangers have added former Cleveland Indians closer Cody Allen to the spring training roster on a minor league deal. Allen last pitched for the Los Angeles Angels in 2019.

Prior to his stop with the Angels, Allen made a name for himself as the relief ace in Cleveland from 2012-2018. During his time as teammate with new Ranger Corey Kluber, Allen recorded 149 saves for the Indians.

Over the last two years, Allen has failed to live up to the expectations he built from his years finishing games with the Indians.

During his last year in Cleveland, the sixth-place finisher in the 2013 Rookie of the Year race saw his ERA balloon to 4.70 after keeping it below three for the four prior seasons.

The Rangers also have Rafael Montero as an option after he was used primarily in the setup role during the second half of 2019. Montero found success in that role, though in only 29 innings of big league action.

Of the trio, Allen has the most skins on the wall so, like Shawn Kelley last season, Allen could be the first to get the call if Leclerc falters this spring or in April.

Cody Allen recorded 30 plus saves in three consecutive seasons from 2015-2017 and owns the Indians’ club record with 149 saves.

In Texas, however, in the better part of the previous five years, the team has had to replace the closer at some point within the season starting with Neftali Feliz in 2015 and most recently with Leclerc in 2019.

Should Allen make the major league roster out of spring training, he will be a guy to keep an eye on to unseat Leclerc if the Rangers’ young right-hander falters early.

Do you think Cody Allen’s history as a closer will earn him a job in the Rangers bullpen? Share your thoughts with Patrick on Twitter @PatSportsGuy.