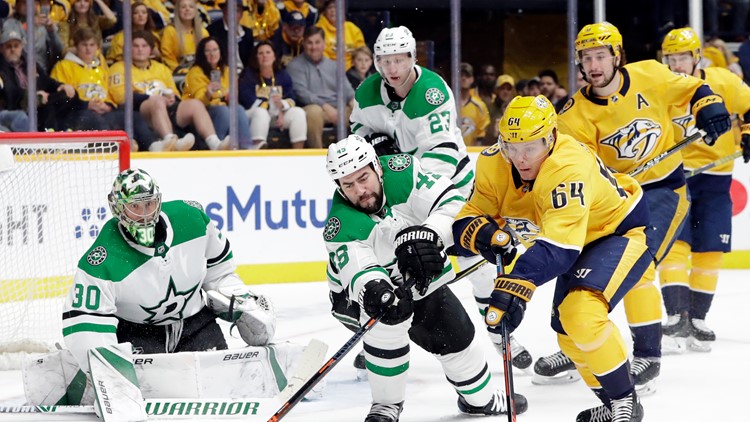 NASHVILLE, Tenn. — (AP) Craig Smith scored five minutes into overtime to give the Nashville Predators a 2-1 victory over the Dallas Stars on Saturday, tying the first-round Western Conference series at 1-1.

Smith scored his first this postseason from the inside edge of the left circle to snap a three-game playoff skid on home ice for Nashville.

Rocco Grimaldi also scored for Nashville, and Pekka Rinne made 22 saves. The Predators had lost five of their last six postseason games in the place they call Smashville.

Jamie Benn scored for Dallas The Stars were outshot 43-23.

The teams went to overtime twice during their five-game series during the regular season, and Dallas won the opener 3-2. So it was no surprise they went past regulation yet again.

The Stars went 0 of 6 on the man advantage after being the NHL's 11th-best on the power play during the regular season.

After losing Game 1, the Predators came into this game having lost five of their last six playoff games on home ice. The Stars came in trying to join both St. Louis and Columbus as road teams taking a 2-0 advantage back home.

The teams fought to the first scoreless period of this young series to open this game, though the Predators killed a four-minute penalty on a double minor to Mattias Ekholm and outshot Dallas 15-9.

Dallas took the lead at 1:59 of the second when Tyler Seguin got the puck off a turnover, passed to Benn at the side of the net for the captain's first goal this postseason. Stars center Mattias Janmark went straight to the locker room after a collision with Predators' defenseman Dan Hamhuis into the boards. Janmark was down for a couple minutes before being helped off the ice at 3:10, putting no weight on his left leg.

Nashville tied it at 3:56, with Grimaldi scoring over Bishop's glove from right in front off a pass from Austin Watson. It was the first postseason goal in Grimaldi's third career playoff game and first with Nashville, and he was in the lineup only because forward Brian Boyle is day to day with an illness.

The Predators also lost forward Wayne Simmonds in the first period after he took a one-timer from teammate Roman Josi off the inside of his left knee. He later tested his leg taking a lap during a TV timeout before going back to the locker room.

In the third, Rinne smothered a shot from Seguin off a pass from Alexander Radulov in the opening minutes. Stars center Jason Dickinson hit the top right corner of the post 5:24 in.

NOTES: The Predators improved to 5-2 at home in Game 2 all-time with their first home playoff win since Game 2 of their second-round series last spring against Winnipeg. Nashville now is 8-11 all-time in Game 2 overall. ... Grimaldi played his first postseason game since April 2016 with Florida. ... Benn now has at least a point in 10 of his 11 career postseason games on the road with four goals and nine assists. ...

Game 3 on Monday night in Dallas.