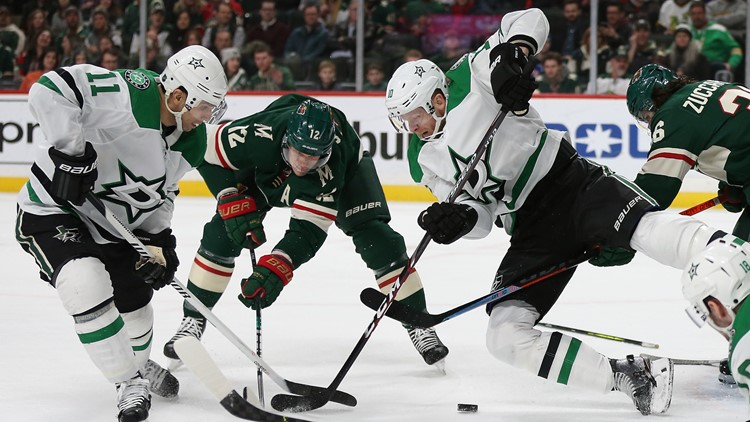 Photo by: AP
Dallas Stars' Corey Perry (10) falls to the ice while going after the puck against Minnesota Wild's Eric Staal (12) and Mats Zuccarello (36) in the second period of an NHL hockey game Saturday, Jan. 18, 2020, in St. Paul, Minn. (AP Photo/Stacy Bengs)

The Minnesota Wild's Alex Stalock posted his second shutout of the season with 27 saves in a 7-0 win against the Dallas Stars on Saturday in Minneapolis.

Anton Khudobin started in goal for Dallas, but was pulled early in the second period after allowing four goals on 17 shots. Ben Bishop entered and made 12 saves, but it wasn't enough. The Stars lost for the third time in four games.

The game was Stephen Johns' first time back on the ice after missing nearly 22 months because of post-traumatic headaches.

The Stars activated Johns before the game Saturday night. Forward Radek Faksa was placed on injured reserve to make room for Johns on the active roster.

The 27-year-old Johns hadn't played since March 29, 2018, at the Wild. It was the last of a career-high 75 games in his third NHL season. Johns missed the last five games that year before sitting out all of last season as his headaches persisted.

The Stars will have a week off to recuperate before facing the Tampa Bay Lighting at 7 p.m. on Jan. 27 at home.