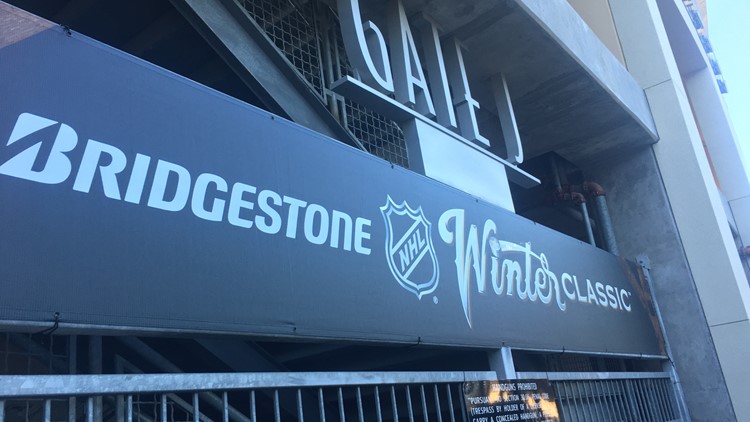 Photo by: David Goins
Banners are going up around the Cotton Bowl in preparation for the Bridgestone NHL Winter Classic in Dallas on January 1, 2020. The Stars will host the Nashville Predators at 1 p.m.

DALLAS — Dallas is just days away from having more than 85,000 fans fill the Cotton Bowl to watch the Dallas Stars take on the Nashville Predators.

The 2020 Bridgestone NHL Winter Classic will be played at 1 p.m. on New Year's Day.

On Friday, the NHL announced it will celebrate Texas heritage during the big event.

The game will include a salute to the iconic Cotton Bowl Stadium.

And of course, there will be several musical performances.

Texas band Midland will open the game-day festivities, then Texas Native, and winner of the Voice, Jake Hoot will perform The Star-Spangled Banner.

Duo Dan + Shay are expected to perform during the first intermission.

And then during the second intermission, the NHL will pay homage to the State Fair of Texas.

There will be plenty of entertainment for fans, including performances from the SMU Mustangs and Texas A&M Aggies dance teams and a rodeo show.

The NHL Winter Classic began in 2008 and is considered the signature one-day event on the hockey calendar.

Click here for more information on the 2020 NHL Winter Classic.

RELATED: The science of transforming a stadium into a hockey arena: Fifth graders get tour of Cotton Bowl