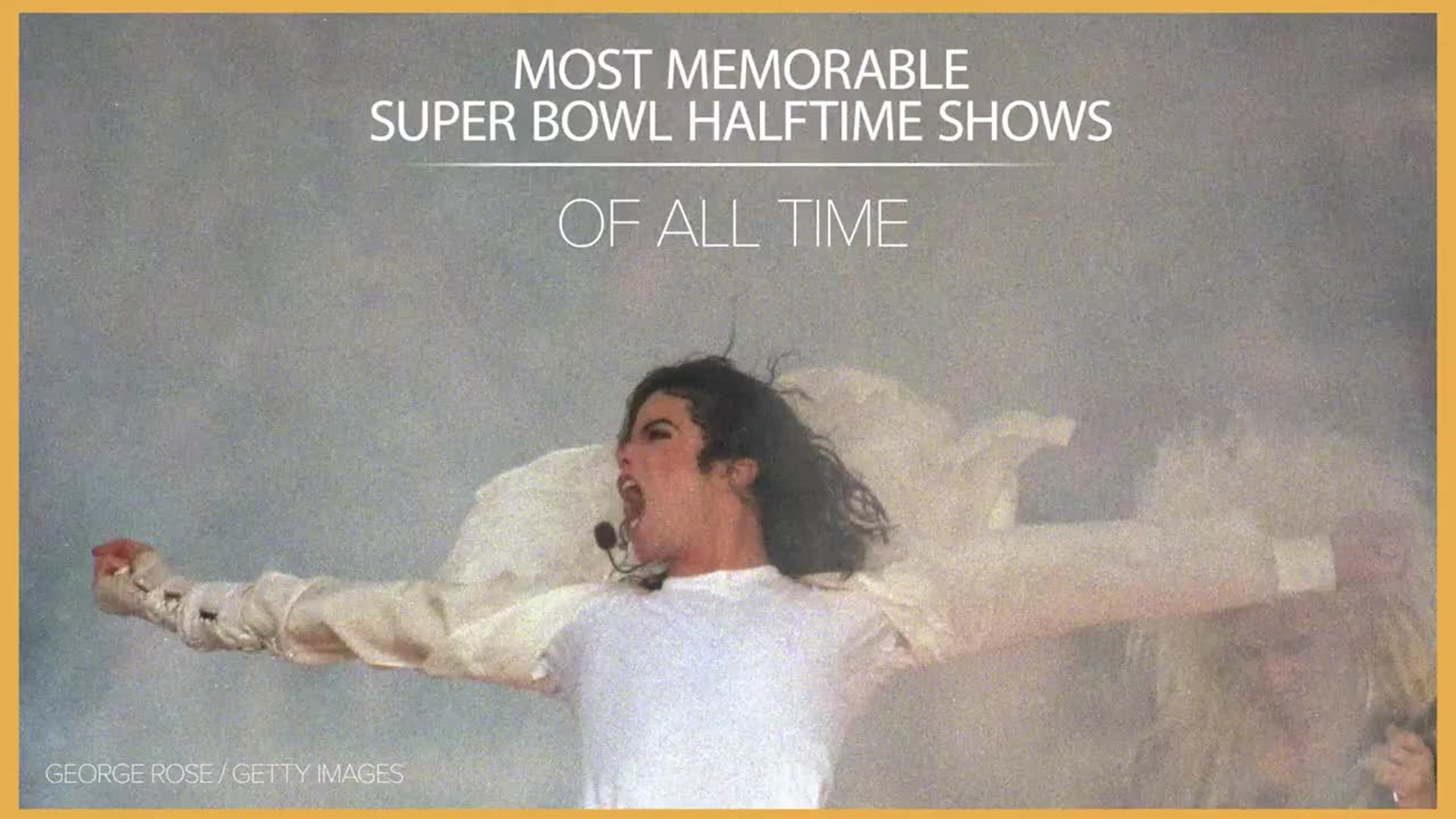 CLEVELAND — Much of America is talking about Sunday's Super Bowl LIV halftime performance by Jennifer Lopez and Shakira.

The duo's act has drawn criticism from some viewers online for being "too sexy." The negative comments focused on the two women's outfits and dance moves, with many focusing on Lopez's pole dance routine. However, many believe the ladies came with the heat, electrifying the Hard Rock Stadium crowd as they performed some of their biggest hit songs.

RELATED: Adam Levine did a shirtless halftime show, but some say J. Lo and Shakira’s was ‘too sexy’

As you consider JLo and Shakira, here's a look at some of the most memorable shows in Super Bowl history to compare them to.

We have to thank the King of Pop for making halftime shows the over-the-top productions that we expect today. During his 1993 performance at the Super Bowl in Pasadena, California, Michael Jackson immediately grabbed the audience’s attention by standing completely still in silence on stage for nearly two minutes. He then performed a mashup of his hits, including “Billie Jean,” and ended the show with “Heal the World” alongside hundreds of children who rushed on stage.

Has there ever been a better collection of talent on one stage at a time?

Just five months after the horrific attacks of September 11, 2001, U2 took the stage at Super Bowl XXXVI and touched the world with their music and their tribute to the victims of 9/11.

As rain poured down on Miami’s stadium in 2007, Prince commanded the stage, dancing around on the slick surface and playing four different electric guitars. Before the show, he reportedly asked the production crew if they could “make it rain harder.” Prince not only performed his beloved hits – including “Purple Rain” – but also played covers of Queen’s “We Will Rock You,” “Proud Mary” by Creedence Clearwater Revival, a medley of “All Along the Watchtower” by Bob Dylan and Foo Fighters’ “Best of You.”

After singing a medley of “God Bless America” and “This Land is Your Land” with hundreds of drones creating an American flag behind her, Lady Gaga appeared to jump from the roof of NRG Stadium in Houston. She then floated into the stadium and started singing “Poker Face.” The whole performance was impressive, but she didn’t actually jump from the roof. The beginning segment with the drones was prerecorded, and during the live set, she was lowered down from the roof by harnesses.

Shakira started the night with a medley of her best songs, including "She Wolf," "Whenever, Wherever" and "Hips Don't Lie." She was joined by Bad Bunny for a cover of Cardi B's "I Like It." Lopez followed Shakira's stunning performance with a rendition of her classic "Jenny From The Block" before launching into a mix that included "Ain't It Funny," "Waiting for Tonight" and "On the Floor." J Balvin joined the 50-year-old for a rendition of "Mi Gente." Lopez's daughter Emme made a surprise appearance, belting a rendition of "Let's Get Loud" with her mother.