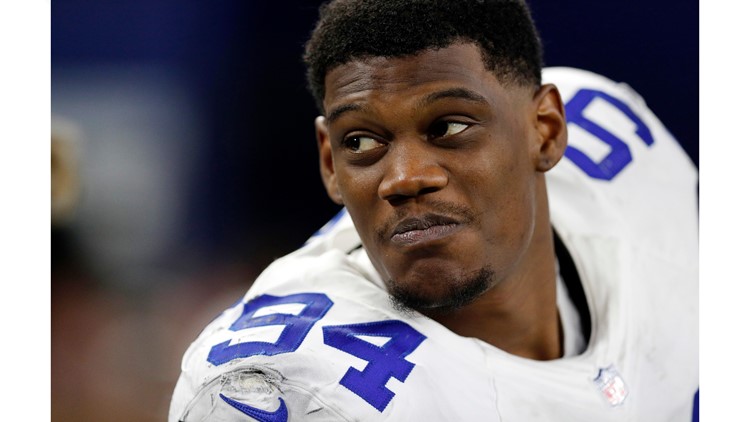 Photo by: AP
FILE - In this Dec. 26, 2016, file photo, Dallas Cowboys' Randy Gregory stands on the sideline late in the second half of an NFL football game against the Detroit Lions in Arlington, Texas. A person with direct knowledge of the application said Friday, May 18, 2018, that Gregory is set to seek reinstatement after missing the 2017 season over multiple violations of the NFL’s substance-abuse policy. (AP Photo/Brandon Wade, File)

The Dallas Cowboys have been looking for pass rush help for far too long now. The team hasn’t had a suitable long term edge rush duo since DeMarcus Ware and Anthony Spencer were getting after the quarterback. That’s the reason why the latest news surrounding the Cowboys should make fans happy.

Suspended DE Randy Gregory is applying for reinstatement with the NFL.

When the NFL, and its players, agreed to the new CBA earlier in March, one condition was the league would no longer suspend players for recreational marijuana use, which is what shelved Gregory each time in his first five years in the league.

Now that Gregory will be free from those positive tests adversely affecting him, he can proceed with playing football if the NFL is willing to put his past transgressions that are no longer transgressions by the new letter of the law behind him.

The Cowboys’ defense would get a big boost if the league reinstated the pass rushing specialist out of Nebraska. Gregory’s best season came in 2018 when he produced six sacks and 7.5 tackles for a loss when paired up with DeMarcus Lawrence.

After being drafted in the second round in 2015, it took Gregory a little while to translate his top-tier talent to the league, especially with the “character issues” of marijuana use constantly hanging over him.

Once he finally got his football legs under him after missing time in 2016 and all of 2017 due to suspensions, Gregory excelled in the later half of the 2018 schedule, racking up five sacks in the last eight games of the year.

Gregory’s career has consisted of seven sacks over an 18 game span, but that doesn’t demonstrate the type of player he’s capable of being. No pass rusher on the team, Lawrence included, brings Gregory’s combination of bend and athleticism coming off the edge.

Gregory now needs the on-field time, and the repetition of playing the game week-to-week, to reach his full potential. Should the NFL cooperate, it might be time for Gregory to get into that rhythm right as Dallas is seeking an edge rusher.

The Cowboys need another pass rusher to pair with Lawrence after losing Robert Quinn in free agency to the Chicago Bears and Gregory could be a big piece to the puzzle. He would fit perfectly with new defensive coordinator Mike Nolan and his hybrid defense that mixes both elements of the 4-3 and 3-4 alignments.

New defensive line coach Jim Tomsula would certainly be excited at the prospect of having Gregory bookending the line with Lawrence on pass rush downs.

Nothing is set in stone, but Randy Gregory should be back on the field for the Cowboys in 2020. It’ll take him some time for him to get adjusted to making football permanent again, but the timing couldn’t be better. The Cowboys need Gregory’s talent back on the field.

Gregory is still under contract with the team, so getting a highly skilled pass rusher without using free-agent money or draft currency would be a huge win for the Cowboys.

The wait for Gregory’s reinstatement is on.

Do you think Randy Gregory will be allowed back in the NFL and can help the Cowboys fill a hole at defensive end? Share your thoughts with Ben on Twitter @BenGrimaldi.