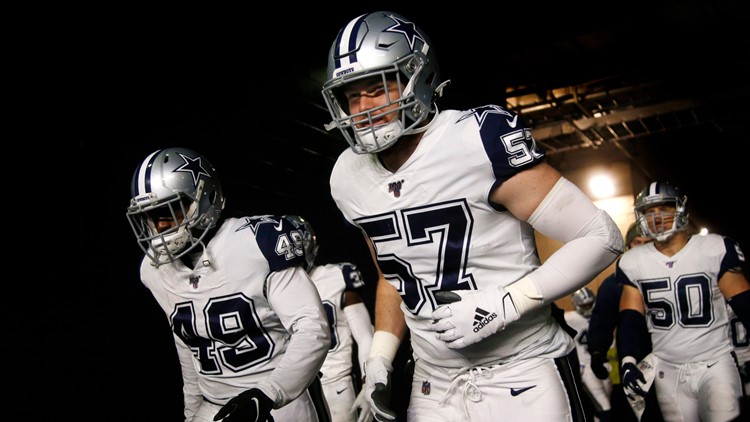 The Dallas Cowboys will be heading into their Week 15 showdown against the Los Angeles Rams on Sunday without much depth at linebacker. In fact, team owner Jerry Jones said it will be “all hands on deck” at the position as the Cowboys look to break out of their slump that has seen them lose three consecutive games.

With that in mind, Luke Gifford has entered the chat.

Over the summer, linebacker wasn’t really a position that seemed like a need in Dallas but Gifford, an undrafted free agent out of Nebraska, earned himself a spot on the roster thanks to an eye-opening training camp.

With a need for quality tacklers on special teams and more depth in the middle of the field, Gifford impressed in his first preseason action with one interception, one tackle and one pass breakup before leaving with a high ankle sprain.

Already dealing with a broken finger at the time, the ankle malady against the San Francisco 49ers back in August looked, for all intents and purposes, like an injury that would end Gifford’s season as the Cowboys wouldn’t have much use for a backup that couldn’t be counted on to play. It was surprising then that Dallas chose to keep him on the roster when they could have used an injured reserve designation to stash him away.

Now, after limited action through his first season, Gifford’s time to shine may be coming on Sunday. In extremely limited action, Gifford has recorded 6 tackles. However, half of those have come in the last two games against Buffalo and Chicago. Gifford is seeing the field a little more lately and he might see it plenty on Sunday.

Following the neck injury to Leighton Vander Esch that has kept the Cowboys’ 2018 first round standout out of the lineup for several weeks, the Cowboys needed Sean Lee to step back into the starting lineup. However, recent practice reports have shown that the oft-injured former Pro Bowler Lee has been unable to take part in activities this week which means he might be unable to go on Sunday.

With two of their main options to man the middle potentially out of action, who will fill the void? Joe Thomas could be the guy who takes a majority of snaps but, as we have seen, this defense likes to rotate in the backups during the game. Jaylon Smith will likely play most of the snaps with Thomas, Justin March, and Gifford getting their opportunities.

Week 15 will be a tough assignment for Gifford and the linebacker depth as the Cowboys will be challenged with stopping Todd Gurley and the Rams. The last time the Cowboys faced the Rams back in the divisional round of the NFC playoffs in January, Los Angeles gashed Dallas for 273 yards on the ground and three scores.

Gifford has been active for five games this year but this is an opportunity for him to make his mark on the team and make good for Dallas keeping him on the roster. The Cowboys could be looking for linebacker help this offseason and Gifford has a real chance to show his value which could allow the Cowboys the freedom to focus on other positions.

Do you think the hobbled linebacker corp will be able to keep it together against Gurley and the Rams on Sunday? Share your thoughts with Patrick on Twitter @DraftCowboys.

RELATED: 'Have you ever played with any females?' 8th grade girl asks Dak Prescott. Here's his answer

RELATED: Patrick’s POV: The Dallas Cowboys have three weeks to prove they belong