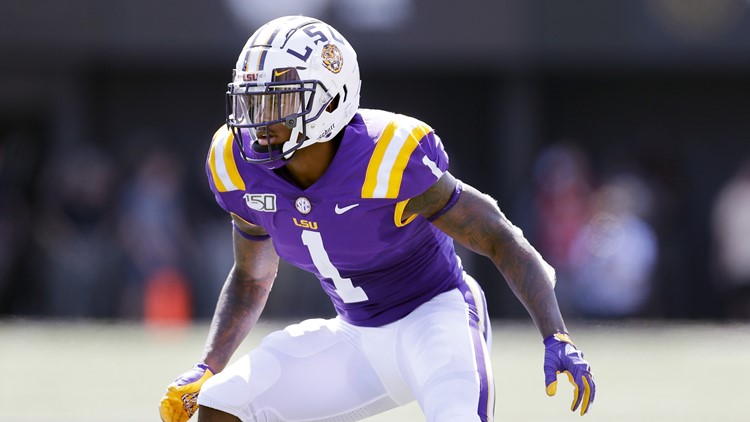 The Dallas Cowboys are currently working on finalizing their draft board as they prepare to enhance their team during the offseason. The NFL Draft officially kicks off Thursday, April 23 and goes through the 25th but, before then, discussions of needs and wants will run rampant.

Barring trades between now and then, the Cowboys will have five picks over the seven rounds with no sixth-rounder due to the trade that landed Robert Quinn in 2019. Dallas will also have plenty of areas to address on their roster after they’ve made free agent and trade decisions, which means the draft will be a prime opportunity to focus on improving the team.

With that in mind, here’s an initial mock draft scenario for the Cowboys:

The Dallas Cowboys have hinted at letting Byron Jones test the market in free agency. With their top corner possibly on the way out, the best option to replace him could be Fulton at pick No. 17 in the first round. The big questions with Fulton are going to revolve around his past off the field issues and his ability to make tackles on the field. When it comes to coverage, however, Fulton provides everything that a team is looking for on the outside.

The safety position has been ignored by the Dallas Cowboys for far too long. With Davis, the Cowboys could finally try to play aggressively on the back end. As a track star in college, Davis can fly all over the field and he has a nose for the ball as a tackler. He secured seven interceptions, three fumble recoveries and forced two more. Davis can also be used around the line of scrimmage and blitzing off the edge. He is a swiss army knife that the Cowboys could use in a variety of ways.

With the uncertainty surrounding Quinn returning to Dallas in 2020, the Cowboys could look to Anae from Utah. Over the past three seasons, Anae accounted for 27.5 sacks and 38 tackles for loss. He does a good job of setting the edge for a defense. The Cowboys can use a player like Anae who is a high effort guy with a relentless motor to bookend along the defensive line with DeMarcus Lawrence.

Though it was a quality unit overall, the team had issues with wide receivers dropping passes in 2019. Duvernay would help in that regard instantly. He also makes big plays after getting the ball in his hands. The offense can use more big plays down the field, especially if they continue transitioning to a more passer-friendly offense. With the contract status of Randall Cobb up in the air, Duvernay would immediately step in and contribute.

The Dallas Cowboys will need to add depth at tight end as it remains unseen as to whether or not Jason Witten will continue his Hall of Fame-worthy career in 2020. As it sits now, Blake Jarwin would be projected to start in 2020. Bryant would provide another option to stretch the field. He is more of a slot threat than a traditional inline tight end, as well. This past season was his most productive year with his 15.4 yards per reception demonstrating what he is capable of doing with the ball in his hands. Bryant could provide Dak Prescott with a new type of threat to beat teams up the seams.

The Cowboys could and perhaps should take a kicker with their final pick in the NFL Draft. Last season saw Brett Maher missing important kicks before Dallas mercifully relented and brought in Kai Forbath to finish out the year. To avoid the mistake in 2020, the team can’t go into the year thinking it’s Forbath’s job and give him no competition. The 2019 Lou Groza Award-winning Blankenship finished his career never missing an extra point and hitting 82.5 percent of his field-goal attempts.

Would you be happy with this draft class for the Cowboys? Share your mock draft thoughts with Patrick on Twitter  @PatSportsGuy.