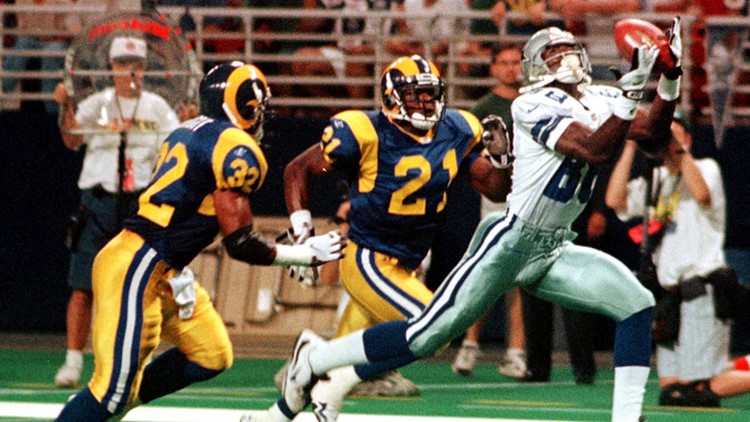 Photo by: AP
Dallas Cowboys Michael Irvin (88) reaches up to catch a 51-yard pass from quarterback Troy Aikman as St. Louis Rams Toby Wright (32) and Dexter McCleon (21) pursue him during the first quarter at the TWA Dome in St. Louis Saturday, Aug. 22, 1998. The catch setup the Cowboys first touchdown of the game. (AP Photo/James A. Finley)

The year 1992 had a different feel for the Dallas Cowboys. Their offense was clicking, their defense was smothering, and they were 8-1 on the season. The nearest NFC East foe was 6-3 with Washington and Philadelphia each holding that record.

After a 37-3 thrashing of the Detroit Lions on Nov. 8 at the Pontiac Silverdome, the Cowboys were headed back to Texas Stadium to host the 3-6 Los Angeles Rams, who were on a two-game losing streak.

The Rams weren't exactly having the turnaround year customary for a Chuck Knox team. Originally the club's head coach from 1973-77, Knox had a reputation for instantaneous turnarounds. In his first year with the Rams, he led them to a 12-2 record and a playoff berth. In 1983, his first year with the Seattle Seahawks, Knox had the Kingdome tenants one game away from the Super Bowl. His second tour of duty with the Rams was looking more like his first season with the Buffalo Bills in 1978: on pace to finish 5-11.

Los Angeles got the ball first and had an optimistic start to the contest as running back Cleveland Gary, their first-round pick from 1989, scored a 1-yard touchdown to give the Rams a quick 7-0 lead.

The Cowboys appeared they would respond swiftly as receiver Michael Irvin caught a 48-yard pass from quarterback Troy Aikman that setup Dallas first-and-10 at the Los Angeles 27-yard line. However, running back Emmitt Smith was unable to pick up a third-and-2, and the Cowboys settled for a 37-yard Lin Elliott field goal with 5:17 to go in the first quarter.

Dallas would force the Rams into a three-and-out and start to look like their true form on offense. Smith set Cowboys history with his 3-yard touchdown run to the right side as it was the 13th rushing touchdown on the season, setting a new single-season high. Rookie Tony Dorsett had 12 in 1977 and another rookie in 1986, Herschel Walker, matched the feat. However, Smith was the new record holder and would set 18 for the season.

The Cowboys followed up their touchdown drive with another Elliott field goal from 42 yards out to extend their lead 13-7. However, the Rams weren't playing the part of a 3-6 club that would surrender so easily. Quarterback Jim Everett led Los Angeles on an 80-yard drive and capped it off with an 8-yard touchdown pass to receiver Jeff Chadwick to take a 14-13 lead after the extra point.

The Rams' success continued as Gary followed up with a 3-yard touchdown catch from Everett to push Los Angeles' lead 21-13 over Dallas at halftime.

After the break, the Cowboys produced a 10-point scoring surge fueled entirely by the special teams. Elliott added his third field goal of the game, this time from 36 yards out, and returner Kelvin Martin took a 74-yard punt return all the way for a touchdown to erase the Rams' lead and give Dallas a 23-21 lead. In a theme of setting records, Martin's punt return touchdown tied Bob Hayes' franchise career record with three.

If the Rams had a shot to get back in the game, it would be to stop the Cowboys offense and chip away at Dallas' lead. That is precisely what Los Angeles did as kicker Tony Zendejas (cousins with former Dallas kickers Max and Luis Zendejas) connected on kicks from 33 and 44 yards out. The second Zendejas kick was especially significant as it was with 1:54 left. Now, the Cowboys would have to mount a touchdown drive to complete the comeback, not simply rely on an Elliott field goal.

The Cowboys had all two timeouts and a potent offense. Aikman led Dallas with 62 yards in nine plays to give the Cowboys a good chance to execute a comeback. However, the eventual three-time Super Bowl champion threw two consecutive incomplete passes to finish 22-of-37 for 272 yards and the Cowboys dropped to 8-2 on the year. Dallas' 11-game home winning streak was snapped, and the Rams' 12-game road losing streak was broken.

As the two clubs meet Sunday at AT&T Stadium, the Rams are in a dogfight in the NFC West scrapping for wins to qualify as a wild-card. The Cowboys don't even really need to beat Los Angeles to make the playoffs, though it would help. Their arrows are pointed in different directions than they were 27 years ago, and the Rams are hoping they can get a win over Dallas as they did on Nov. 15, 1992.

Do you think the 2019 Cowboys will be able to do something that even the 1992 team couldn’t pull off by beating the LA Rams on Sunday? Share your thoughts and memories with Mark on Twitter @therealmarklane.

RELATED: 'Have you ever played with any females?' 8th grade girl asks Dak Prescott. Here's his answer

RELATED: Patrick’s POV: The Dallas Cowboys have three weeks to prove they belong